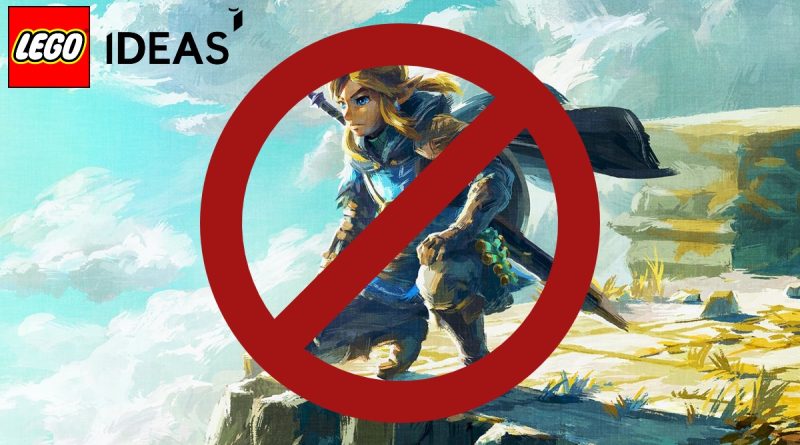 The LEGO Group is no longer allowing The Legend of Zelda projects to be submitted to its LEGO Ideas platform, apparently owing to a ‘licence conflict’.

At least eight fan designs based on Nintendo’s The Legend of Zelda franchise have reached 10,000 votes on LEGO Ideas, and subsequently progressed to the review stage for consideration as an official product. None of them have made it past that point, however, as the review board has rejected each and every one – shutting down the hopes and dreams of thousands.

If you’re among the gaming fans who’ve felt that disappointment, good news: it won’t happen again, as the LEGO Group has banned all LEGO Ideas submissions based on The Legend of Zelda. Whether that’s for good or bad reasons, though, is up in the air.

The first possibility is that the LEGO Group has finally decided to take advantage of its current partnership with Nintendo, and the clear desire for LEGO The Legend of Zelda sets, to create products based on the iconic action-adventure franchise. It’s already working with the company that owns the IP, after all, for the LEGO Super Mario range, which by all accounts is doing pretty well for the LEGO Group. (It’s now in its third year, and showing no signs of slowing down.)

At first glance, that ambiguous wording could mean that Ideas Zelda sets would conflict with the LEGO Group’s own, in-house Zelda sets. It’s the same phrasing applied to Transformers, and we already know the LEGO Group has the licence for that particular IP thanks to 10302 Optimus Prime. But at the same time, other franchises it holds the rights for – such as Super Mario or Star Wars – specifically list ‘current third-party overlap’ as the reason for not allowing submissions.

IPs that are currently under the purview of competitors, like Pokémon – the licence for which is held by Mega Construx – are also disallowed on LEGO Ideas through ‘licence conflicts’, suggesting that wording actually means the LEGO Group can’t produce sets based on that franchise because the rights are licensed to another company. The same would once have been true of Transformers, so it may be that the LEGO Ideas team simply hasn’t updated that particular franchise.

If that’s the case, the most likely – and gloomy – outlook is that another construction toy company has linked up with Nintendo to manufacture products based on The Legend of Zelda. Either way, it’s the end of an era for LEGO Ideas.