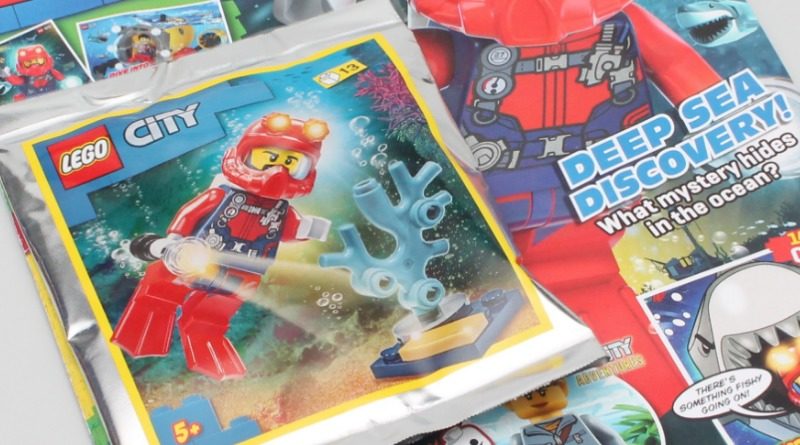 The latest issue of the LEGO CITY magazine takes the action underwater, with a focus on deep sea diving – and a free diver minifigure.

Immediate Media’s LEGO CITY title has been running since 2017 in the UK, and now follows the same monthly release pattern as several of its other publications, including the LEGO NINJAGO magazine and the LEGO Star Wars magazine.

As well as the usual mix of puzzles, comics, posters and activities to keep younger fans entertained, this month’s LEGO CITY mag includes a free deep sea diver minifigure. It’s a pretty tempting one, too: this summer’s Deep Sea Explorers subtheme introduced a new diving helmet, but only in two larger sets and a hard-to-find polybag.

It’s one fewer free gift than last issue, which included both a Duke Detain minifigure and a random extra toy. You do get a £1 discount to accommodate that change, though, with the cover price decreasing to just £3.99. That makes it a great way to get your hands on the new diver helmet without ponying up for the likes of 60265 Ocean Exploration Base or 60266 Ocean Exploration Ship.

Issue 34 of the LEGO CITY magazine is available until January 5 at newsagents and supermarkets. Issue 35 will arrive on shelves January 6, and includes a free policeman minifigure and helicopter build.

Head here for a closer look at the diver minifigure included in this month’s issue. The latest LEGO NINJAGO magazine includes a Munce minifigure, while its Star Wars counterpart comes bundled with Obi-Wan’s Jedi Interceptor.