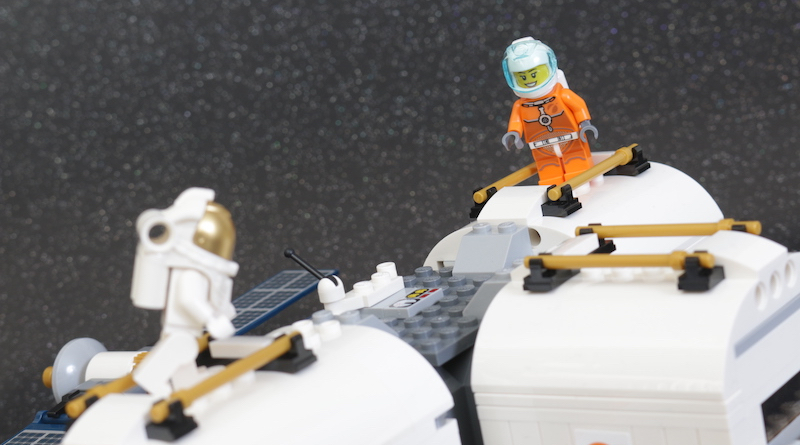 60227 Lunar Space Station may be stuck in a junior City theme, but there’s a great deal to love about this first minifigure-scale, NASA-inspired space station

City’s sub-theme Space is back after four years and, thanks to a new design focus, has some interesting inclusions within its first wave of sets, namely the massive 60229 Rocket Assembly & Transport, minifigure booster set 60230 People Pack – Space Research, and 60227 Lunar Space Station. 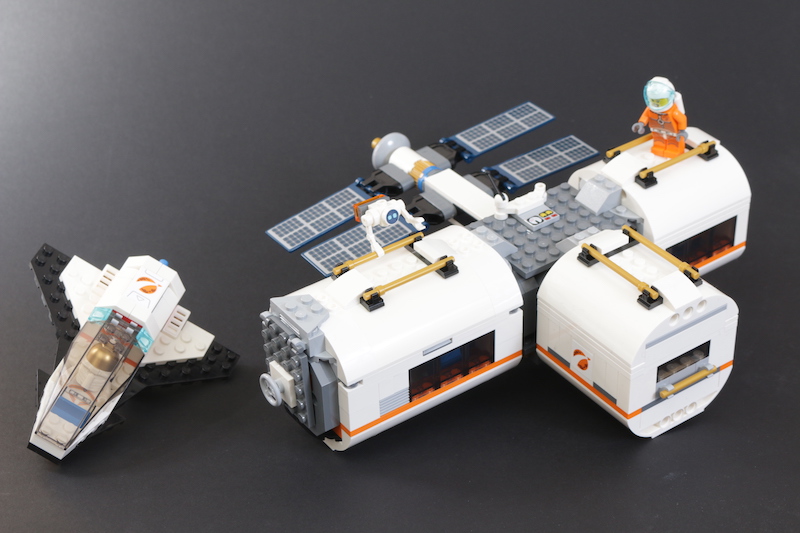 The range as a whole takes its design lead from NASA’s space program, and 60227 Lunar Space Station’s box art front and back highlights that it is specifically inspired by the Lunar Gateway project. This project aims to create a lunar-orbit space station and is ‘intended to serve as a solar-powered communications hub, science laboratory, short-term habitation module, and holding area for rovers and other robots’. Each of these aspects of the future Lunar Gateway has been efficiently worked into the design and functionality of 60227.

Efficiently so, because City is continuing to feel much closer to the 4+ range than anything else coming out of Billund at the moment, in terms of parts used and build techniques employed. It’s perhaps purposefully and understandably so, as the LEGO Group likes the stepped levels of building that its various themes can offer children as they grow up. But, positioning Cityimmediately after the most junior lines can be frustrating for a more experienced builder, both for the ease and pace with which anything is constructed, but also the wonder of what could have been – City gets to explore some interesting reference material, and you can’t help but wonder where a more technical build level could take things.

That is not to say that 60227 Lunar Space Station is worth skipping in any way whatsoever. You are building something genuinely new in LEGO – for what it lacks in technical challenge, it makes up for in the final model, which cleverly encapsulates what the Lunar Gateway could one day look like. The solar paneled, satellite-style module looks to represent the Power and Propulsion Element of the Lunar Gateway, which will generate the station’s power and its ‘solar electric propulsion’.

The aspects of communications hub, science laboratory and short-term habitation all serve as the inspiration behind the interior design to the three modules in the build. Screens throughout indicate the connectivity to other areas of the station and life back on Earth, the use of the light brick adds intrigue to the new broken rock pieces for a laboratory, whilst even if having a pizza oven in space isn’t likely, its presence alongside a plant-growing area suggest the two included crew won’t go hungry.

These three modules are joined together via a central passageway, and, with a modular aspect, can be set up in a few different arrangements. This modular build also replicates the modular approach that the Lunar Gateway will be constructed in, and, offers a set that can actually be added to in a reasonably accessible way. With the Lunar Gateway only launching the first module – the Power and Propulsion Element – in 2022, the LEGO Group could revisit this a few times before everything is complete.

There’s also a small shuttle that can connect to one of the hubs – rather dangerously requiring the entire door to swing upwards before backing in. If the crew aren’t sucked out of the station and the lack of oxygen doesn’t kill them, perhaps the engine from the back of the shuttle will?

It’s a harmless little thing and, alongside the small robot with adorably-printed eyes (expect to see these in a few fan builds to come), acknowledges the vehicular and robotic aspects to the Lunar Gateway. The real world/off-world direction that these go in will almost certainly not mirror how they appear in LEGO form, but, the creative license taken here, and in other areas of the set as a whole, are done for play value.

And that is important. This isn’t a set for the more sophisticated interlocker of bricks, but for the younger person just getting into the interest of space travel and the adventure and wonder that it offers – and more so than any other set in this sub-theme’s line of releases, it taps into that, offers a genuinely new final model not previously visited in brick form, and at good value for money. Hopefully then there’s a chance for the City Space range to grow as these younger fans do, towards more advanced builds so as to really explore what’s possible with such reference material in LEGO. Until such a time, this isn’t a bad first minifigure-scale LEGO space station to build, and for the more challenging construction task we can certainly make do with the Creator Expert 10266 NASA Apollo 11 Lunar Lander in the meantime.

60227 Lunar Space Station is available now at shop.lego.com. You can help support Brick Fanatics’ work by using our affiliate links.