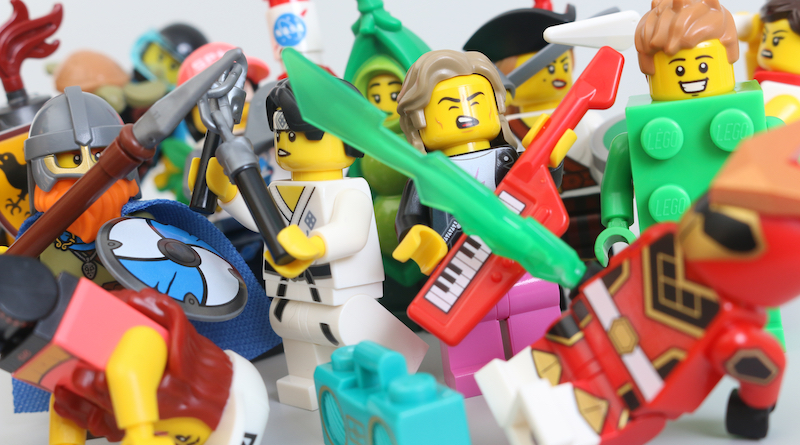 The LEGO Group’s Series 20 of Collectible Minifigures is a much-needed return to form, offering a perfect mix of novelty and nostalgia for LEGO fans

The latest collection of 16 blind-bag LEGO Collectible Minifigures to feel out for once more offers a decent variety of characters to go alongside an again excellent choice of unique accessories, recoloured parts and dual-moulded legs and arms.

It’s a balancing act to offer LEGO fans a decent mix of new items within the Collectible Minifigures (CMF) series, at the same time as creating a selection of characters that genuinely represent different situations, possible themes, lines of work, walks of life and times in history.

Recent previous series have offered great parts and accessories, as well as a handful of truly remarkable new minifigures, but have fallen short in creating complete series akin to the CMFs’ earliest series, which were packed full of minifigures that offered that perfect blend of new creativity and older theme nostalgia. Series 20, though, marks a welcome return to that clever, hard-to-achieve recipe, offering the first full series of CMFs in a while that is genuinely packed almost minifigure to minifigure with genuine appeal and collectability.

Luke Skywalker’s hairpiece from The Last Jedi is the perfect launch-point for a minifigure whose entire outfit oozes 1980s pop culture. The mullet and complementary keytar may be the most obvious defining points to this dude’s look, but don’t underestimate how great that jacket with back printing is and those pink jeans…

This mighy morphin’ minifigure looks like he’s handy in a fight, surely if some martial arts are called for. He probably dresses in red when attending high school and has four friends who similarly like one-colour attire. Does he ride a giant robotic red dinosaur? Why not? This is all conjecture, and we didn’t say ‘he’s a Power Ranger’, and we don’t even know why you’d expect us to – behave now. The highly derivative nature of this minifigure’s design aside, it looks great all the same, with some flash printing all round and a truly new helmet piece.

Talking of derivative material, that is definitely not a Fortnite llama loot piñata, stop trying to cause trouble by suggesting that it even looks remotely close to one. Allow us to cause the trouble – it kind of does resemble the Fortnite llama loot piñata. However, the boy that comes with the piñata is great, thanks to that oversized sombrero and the multi-coloured poncho. You can’t wear a poncho and not smile.

Ah, if only this was coloured purple, blue and turquoise, it could have looked quite good, and truly completed the derivative hat-trick. As it is, though, after the Drone Pilot, Llama Costume Girl is perhaps the dullest minifigure in Series 20, and that’s not to criticise what is still a welcome addition to the collection of animal costumed minifigures. Unfortunately, though, where these minifigures were once the standout novelty of a CMF series, they are now all feeling rather similar and uninspired.

There’s something unusual about the Pea Pod Costume Girl, a few things actually. The green lipstick for one, but also the choice of an apple as an accessory and then the fruit bowl printed torso. A compelling backstory like this, combined with a very clever mould for the pea costume keeps this costumed minifigure far more interesting than the Llama Costume Girl and indeed other recent food costumed minifigures.

After the outright success of the red and blue brick suit minifigures from Series 18, here’s another one, this time in green! The novelty of the brick suit piece will probably never wear off, but, if it has, you’ve got the bonus of a 10th anniversary printed tile (quite a meta accessory…) and a new hairpiece.

What’s interesting about the drone is that the blades are not loose when attached, meaning there’s no twirling them around like in other connections where that’s possible (minifigure hats, for instance). It doesn’t detract greatly from what is a fascinating four-pronged piece for the top half of the drone. The minifigure feels more like the accessory in this blind bag, and probably the weakest of the series.

The turtle is indeed as cute in real life as any number of photos will show, and it is a potential point of creativity for any number of underwater MOCs we could see in years to come. That’s not to take anything away from the diver minifigure, though, who benefits greatly from dual-moulded arms and legs to genuinely offer a worthwhile addition to what may be your unusually large number of underwater-themed minifigures.

Ah, perfectly timed for the build-up to the Olympics scheduled for this summer, but that face uncertainty thanks to the widespread Coronavirus. It’s a fantastic design all round, in particular for that torso with competitor’s number and for those dual-moulded legs that just perfectly embody an athlete’s appearance.

The standout for many, no doubt, will be the Viking minifigure, and rightly so, for its detailed printed, dual-moulded arms and legs, and most noteworthy, the helmet piece that marks a significant upgrade on what came before in 2005’s Vikings theme and in the two previous Viking-themed minifigures from CMF series prior. This is the best LEGO Viking ever, the best minifigure in Series 20, and a prime candidate for army building.

Whilst the Viking feels like fresh ground, the Tournament Knight is certainly of a theme that feels well-covered by the CMF series at this point. That being said, though, the CMF that this feels most matched to – the green knight from Series 15 – came out four years ago. Dark yellow and black in torso print, with a gigantic sword and a classic shield with fresh house print on it, there’s enough about this Knight to at once call back to Classic Castle and to offer something new. The older Sean Connery face underneath is a wonderful surprise too.

Not the first martial artist that the CMF line has thrown our way, but certainly a must-have thanks to those nunchakus that remarkably come as one piece. The minifigure design itself is perhaps limited in design complexity by its reference material – perhaps this was the opportunity for a black-suited martial artist, maybe even with a cobra printed on the back. If the LEGO Group continue to derive from other sources for some of its creativity, why not such a suggestion?

Is this the first female minifigure with a tooth missing? We can’t answer that question, but we can confirm that this is one of the best pirate minifigures ever produced for any number of clear reasons, from the head and hat piece to the printed torso and legs. With the giant Ideas Pirate set around the corner, this is excellently timed and no doubt will prove hard to find.

A lesser CMF series would have offered this minifigure with a recoloured teddy accessory, or the Hermione hairpiece in the already produced brown. But, Sleepy Girl is a great example of why Series 20 is so strong, over delivering to make what would otherwise be a potentially dull minifigure a truly desirable one. Cute pyjamas too.

The NASA print and Classic Space torso are clear signs as to who Rocket Girl is aimed at, but it’s the coral-coloured hat with black hair piece that really makes this minifigure far more fantastic than it should be. You may not want an army of these (if you do want to see an army of Classic Space nerds, go to the Leicester Space Centre LEGO event each March, or to Swindon’s STEAM LEGO event in October – the best kind can be found there), but, there’s so much to appreciate and quite frankly part out, should doubles come your way.

Hip, hop, pow. The use of the clear piece introduced in the recent DC CMF series gives this breakdancer some unique poses and moves to bust, but the strength to this minifigure is in that hair and hat piece, the printed torso with bare midriff and the lovely dual moulded legs. The only thing not cool about Breakdancer Girl is giving the minifigure any sort of name like that. Luckily though, it’s such a minifigure and choice of colours that we’ll let the LEGO Group off.

Series 20 is a return to form for the Collectible Minifigure Series, with many a minifigure offering broad appeal, genuine novelty and fun design. The LEGO Group continues to veer into derivative territory, but not at the expense of the overall collection available here, nor to the detriment of the particular minifigures clearly inspired by material elsewhere. A strong series with little else to criticise, this will be a classic in future years.

With uncertainty over going into stores at this time, perhaps purchase your Collectible Minifigure Series 20 minifigures online at LEGO.com – click through from one of our affiliate links on this page too and support the work that we do at Brick Fanatics.