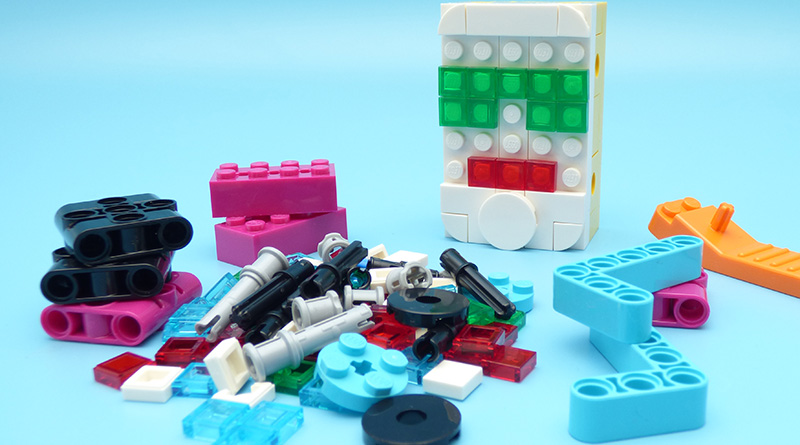 LEGO Education 2000456 SPIKE Prime is a promotional polybag given out to those who might be in the market to buy SPIKE Prime – or other LEGO Education products – for their school. It is not intended for the average LEGO fan, and for most will probably not hold great deal of interest.

This is very much a promotional set. In LEGO SPIKE Prime, everything focuses on a programmable hub that has multiple connection points so that it can control motors and sensors. This polybag builds a replica of that hub, although of course using only standard LEGO bricks, it is ornamental rather than functional.

Additional bricks are then included to customise the hub. These include 1×1 tiles to imitate the lights from the real electronic element. There are also Technic elements and a few of the brand-new SPIKE Prime pieces, which can be used to build something around the hub.

Inspiration is included that suggests turning the hub into an insect or decorate it with a heart shape.

The exclusive pieces that are included are the 2×4 bricks with cross axle connections and the new Technic piece with eight pin connections. These have the potential to be really useful in builds, but bricks from beyond this set will need to be added to demonstrate that.

2000456 SPIKE Prime is a set that only polybag collectors or those who love strange, obscure LEGO sets will want. It is not for fans; it is intended to embed SPIKE Prime in the minds of educators who might buy the product as it sits on their desk. The set takes a functional component that most will be unfamiliar with and replicates it, so only if that sounds appealing should a LEGO fan track this down.