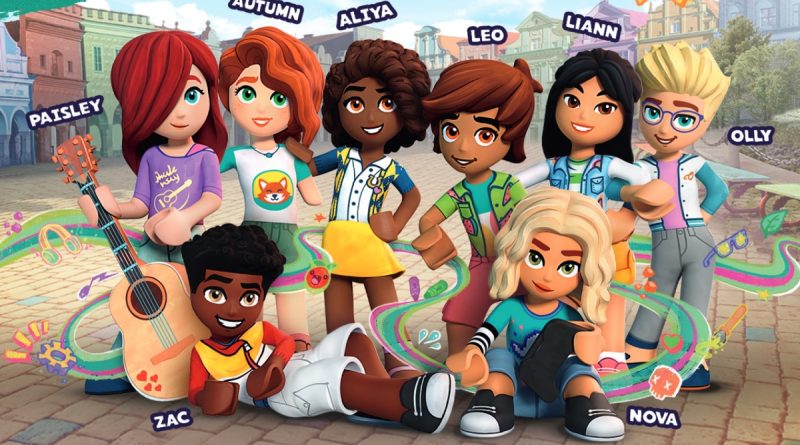 The next generation of LEGO Friends sets will also debut a brand new visual identity for the theme, which the LEGO Group says is intended to ‘break gender stereotypes’.

Originally designed to target girls first and foremost, LEGO Friends launched in 2012 with uniform branding across its sets and wider media. And presumably in line with its primary demographic (at least in the LEGO Group’s eyes), the mini-doll theme’s visual identity was initially anchored to various shades of bright pink. Over time, it’s moved towards a less intense purple as the default for its boxes, which can be seen across most of the current range.

When the new generation of characters arrives in January, however, they’ll do so accompanied by a wider visual revamp for Friends, which includes a new logo and fresh colours for its packaging. Purple is still in the mix, but it’s now secondary to teal – the theme’s new primary colour – while the logo also incorporates blue, green, pink and orange. According to the LEGO Group, the aim is to make the theme more inclusive.

“We really want to bring a modern look and feel to the whole universe,” says Costas Syrmos, Marketing Lead for LEGO Friends. “When we looked at it again, it’s like, how do we break gender stereotypes and make something that is inclusive and open to everyone, both kids and boys? So we changed the logo to be something that is more creative – you can see the different colours in the letters, which represent the multi-dimensional characters in the colourful and creative universe that we’re bringing to life.”

That aim also speaks to the wider revamp of the Friends theme, which has been driven by requests from kids for better representation across the LEGO portfolio. The new main cast of mini-dolls is comprised of five girls and three boys, broadening the scope of the theme (and in doing so, opening it up to a wider audience, which we’re sure is absolutely fine by the LEGO Group’s bean counters).

Beyond just the colour refresh and new logo, the new boxes also incorporate photorealistic backgrounds for the first time, and are dotted with something the LEGO Group’s calling ‘doodles’, which are apparently intended to add ‘energy and emotion’ to the packaging.

Click here to find out more about LEGO Friends’ relaunch in 2023, or head here to see the contents of the first five sets arriving in January.