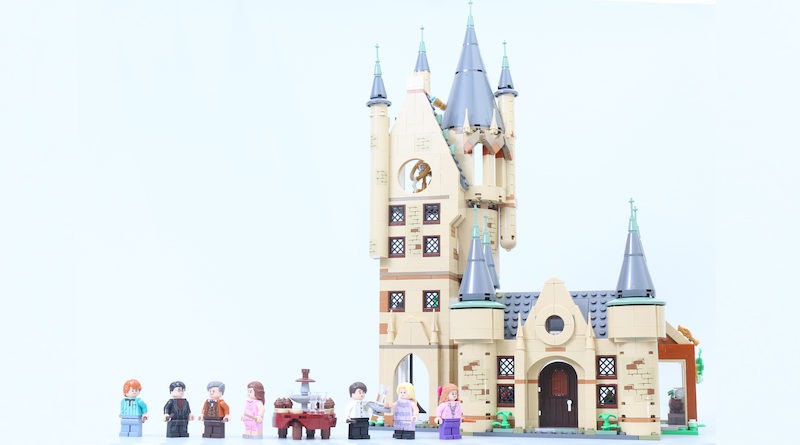 LEGO Harry Potter continues to go from strength to strength as a theme, thanks to an approach from the theme’s designers to allow story, character and environment dictate the make-up of each LEGO set. Where the likes of NINJAGO, Star Wars, CITY and pretty much any other theme have to bring in play functions to reflect action, movement and conflict, Harry Potter has its own identity and focus thanks to not basing its design on nothing more than story, character and environment.

With that clear approach in mind, 75969 Hogwarts Astronomy Tower is a fine addition to what for many is a growing minifigure scale Hogwarts Castle.

Released as part of the June 2020 wave of sets, 75969 Hogwarts Astronomy Tower represents an interesting stage of the LEGO Harry Potter theme’s development since its return to shelves in 2018.

Following on from 75954 Hogwarts Great Hall and 75953 Hogwarts Whomping Willow from 2018, and 75948 Hogwarts Clock Tower from 2019, 75969 Hogwarts Astronomy Tower is the fourth mid-to-large-size minifigure scale release depicting a section of Hogwarts Castle (additionally in the 2020 wave has come the smaller 75966 Hogwarts Room of Requirement, whilst last year’s 75947 Hagrid’s Hut: Buckbeak’s Rescue is also technically on Hogwarts grounds, if not part of the castle).

As the fourth set adding significant size to the growing minifigure scale Hogwarts that the LEGO Group is slowly building, then, 75969 Hogwarts Astronomy Tower faces a dual challenge, to at once sit compatible in style and design with the previous editions of the castle, but also offer enough of an upgrade and enough unique points of interest to allow it to hold its own, both for those who haven’t bought any of the previous castle sections, and for those who may otherwise see them all as too similar to one another.

As best they can, whilst working within the confines of a colour-scheme that will naturally tint each of these Hogwarts Castle sets very similar, the LEGO Harry Potter design team has achieved this in two key areas. For the exterior side of the castle, in tackling the Hogwarts’ astronomy tower, 75969 relishes in being able to explore new architectural shapes and geometry, across the whole build too, from the greenhouse and large gateway/door, to the rising tower with unusual overhang and shape.

With attention on the interior, the designers have kept things simple and allowed the story from the selected related film – in this case, Harry Potter and the Half-Blood Prince – to dictate the themes, rooms and activities explored. Whilst it sits a little unusually as the second consecutive Hogwarts Castle build to be based around a Christmas party – 75948 Hogwarts Clock Tower was centred around the Yule Ball – and it seems like we have skipped exploration of the castle during Harry Potter and the Order of the Phoenix, the Slug Club (and more specifically, the Slug Club’s Christmas party) makes for a great and story-central focus for 75969 Hogwarts Astronomy Tower. It ties the rooms included together nicely, with hints of Professor Slughorn’s Potions class and the astronomy tower itself where the included Draco Malfoy is right at home loitering within. The inclusion of a small office and part of the Ravenclaw dormitory are further nice touches to expand on similar areas explored in previous Hogwarts-related sets.

As is becoming expected of LEGO Harry Potter as a theme, the quantity, selection and design of the minifigures included in 75969 Hogwarts Astronomy Tower are as good as can be, from the design of Professor Slughorn that comes very close to that of the character in 2018’s four-pack minifigure set, through to the inclusion of Lavender Brown as she courts Ron.

Harry, Hermione, Luna and waiter Neville are all designed as they appear in the film at the Slug Club’s Christmas party, with particular attention to detail and colour to add authenticity to the scene that 75969 Hogwarts Astronomy Tower as a whole creates. Meanwhile, Draco in his robes makes for a fresh update on the character and one more in fitting with his darker turn during Harry Potter and the Half-Blood Prince.

Just as with the build of the set, care and attention has been put into the minifigures to offer a truly complete experience for die-hard Harry Potter fans, rewarding their deep knowledge and love of these characters and meeting their expectations.

Expectations are important to consider, because 75969 Hogwarts Astronomy Tower comes in at the joint most expensive Hogwarts Castle set since LEGO Harry Potter returned as a theme in 2018, since the launch year’s 75954 Hogwarts Great Hall.

In comparison with that set, the almost 100 extra pieces included are nice bonus on top of a build, final model and minifigure selection that make 75969 Hogwarts Astronomy Tower a credible addition to the collection, at the same time as strong enough to stand on its own. It’s an involved build process that demands attention, with some clever tricks hidden within, and a final model that takes you right back to a central moment within the book and film.

There’s a great deal to admire about the consistency and quality of LEGO Harry Potter sets into this third year of releases, and the same can be said of 75969 Hogwarts Astronomy Tower. Most importantly for 75969, with regards to its place as the fourth successive Hogwarts Castle-based set, it delivers fresh architecture, story, minifigures and details to satisfy any Harry Potter fan’s love of the franchise and of the particular book and film that the design team have centred this model around.

LEGO Harry Potter fans may be coming to a moment where they stick or twist with collecting the minifigure scale Hogwarts Castle sets, whilst others just coming into the theme may regret missing the previous sections of the castle released and feel it’s too much like half a set to pick up 75969 Hogwarts Astronomy Tower. However, for both parties, this set carries relevance, both as a suitable continuation of what by now is a pretty sizeable collection of Hogwarts Castle builds, and as its own standalone build celebrating one of the books and films with great authenticity and detail.

75969 Hogwarts Astronomy Tower is available now at at LEGO.com. You can help support Brick Fanatics’ work by using our affiliate links. 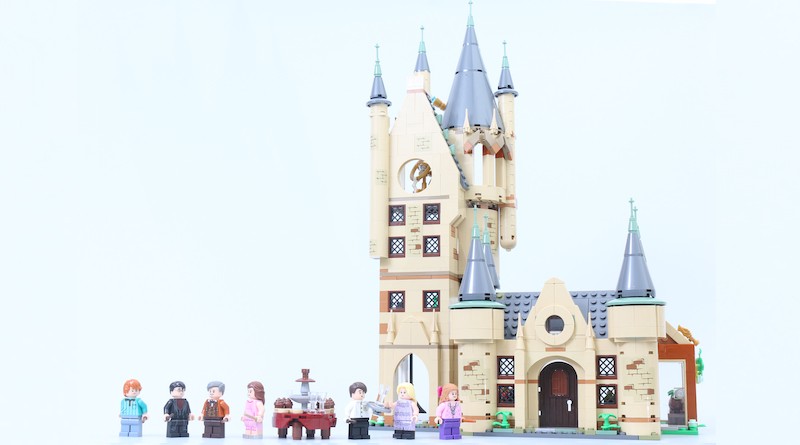