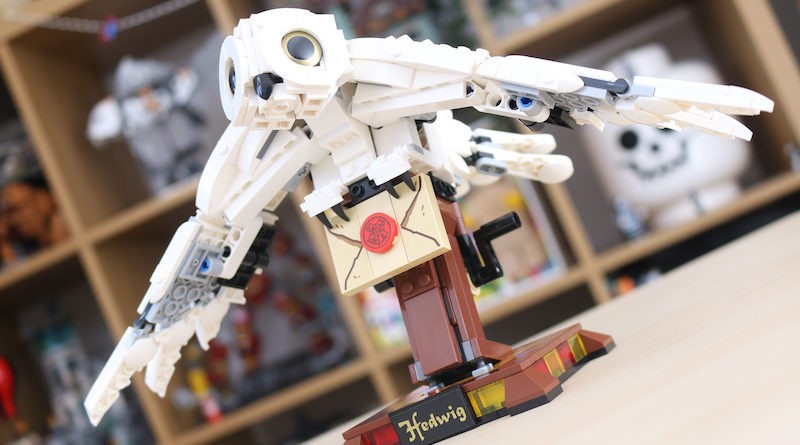 As you first turn the lever that has been built into the stand and watch as the wings of the model white owl slowly lift up in a movement that begins from the chest of the creature and continues right through to the tips of each wing, and that reaches a natural arch before coming back down under their own gravity, you know that there’s something very special about 75979 Hedwig.

A play function that could have been just a simple, clunky up-and-down flapping motion is instead, in the case of 75979 Hedwig, the most fluid and authentic interpretation of a bird’s wing motion we can imagine is quite possible with LEGO.

Such is the grace of movement that it captures and just how complete an action it is through the entirety of the model owl’s wingspan, the flying mechanism that has been built into 75979 Hedwig feels less like a play function and more like the set’s entire raison d’être.

Indeed, the build is centred around a Technic-based interior of levers and gears through the base shaft and into the body of the owl, and it is designed so efficiently that, in what feels like an impossibly small number of pieces, it has the complexity of movement and strength of support needed to animate the owl that is built around it.

This is a very different type of LEGO Harry Potter set, indicative of the theme’s penchant – whilst delivering some truly great minifigure-scale sets – to try new things and at different scales since its return in 2018. 75979 Hedwig is the epitome of that creative direction and an example that other sets that may try to follow will be held up against.

For display, this set wonderfully captures the unique nature and structure of Hedwig the owl, from the shaping of the body and angles of the wings, through to the particular contours of a trickily-shaped head. The proportions of the head may surprise you, from how they appear on the box art through to how they appear in real life, but, once adjusted and even when compared to the real-life source material from the films, it feels far more appropriate at the smaller size.

The set comes with an exclusive minifigure Harry Potter complete with first year blue gloves. It’s a spot-on recreation of the Boy Who Lived’s appearance from Harry Potter and the Philosopher’s Stone and is the most apt version of the character to be included with this model, reflective of when we see the two of them together the most on screen. Of course, he comes with the minifigure scale new mould for Hedwig too, complete with a small stand for them both that can connect to the front of the main model’s base too.

Considering the price leads us to talk more about the play function. It not only moves the wings up and down, but does so in a way that perfectly mimics the movement of an owl, from drawing up its chest and lifting through its back, all the while with the tips of the wings following up, before the wings reach an arch shape and then drop back down.

There’s an extra level of authenticity to 75979 Hedwig that, thanks to this play function, overdelivers on the set’s expectations. Priced at £34.99, there’s an idea you take into building the set of what an ideal version of a flying Hedwig model could look and work like, then there’s this faultless creation that sits – and flies – before you that just goes above and beyond.

This is a great set for builders new and experienced to put together, and a fantastic final model for play and display.

Ultimately, what could have been a gimmick is instead an intelligently-designed, cleverly crafted LEGO set that, thanks to its central play function, has life like very few LEGO sets to have come before. Whilst it is perfect on display, this is a set you’ll not really be able to leave alone too long, such is the pleasing and intuitive nature of turning that lever and seeing Hedwig fly.

You know you have built a special LEGO set when it makes you smile afterwards and starts your mind thinking about what’s possible next. Is this the start of a whole line of animated creatures from Harry Potter? How would they create Crookshanks, or Scabbers, or Nagini even? This is a set that excites that inner creativity by teaching you something that is truly innovative, in a way that somewhat remarkably makes it feel like it’s not totally out of the realms of your own creativity.

By taking a risk and building something new, and delivering a sense of movement and play to the model way beyond expectations, 75979 Hedwig is a unique LEGO set in 2020 and one most certainly not miss out on. We knew there was a reason it was in our Top 20 LEGO Sets List…

75979 Hedwig is available now at at LEGO.com. You can help support Brick Fanatics’ work by using our affiliate links.