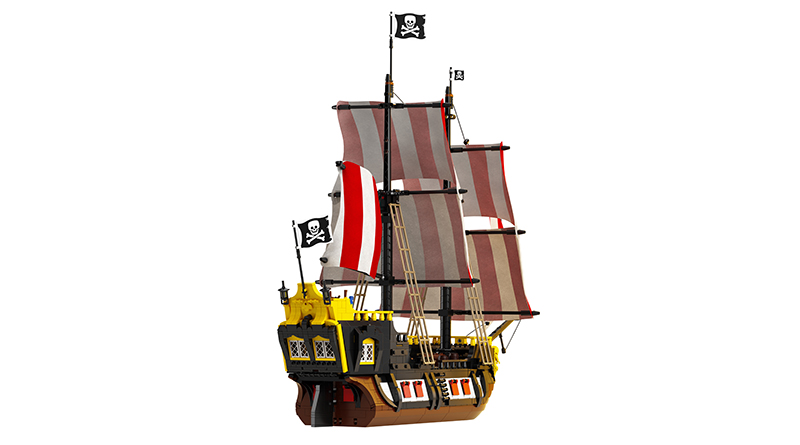 Fan designer Pablo Sánchez Jiménez dreamed up LEGO Ideas 21322 Pirates of Barracuda Bay, but when it landed on the desks of Milan Madge and Austin Carlson, the fan input was far from over

Every LEGO Ideas set is initially conceived by a LEGO fan. Pablo Sánchez Jiménez came up with The Pirate Bay and submitted it to LEGO Ideas, quickly reaching 10,000 votes and therefore the attention of the LEGO Group.

In the case of 21322 Pirates of Barracuda Bay, Model Designer Milan Madge and Senior Graphic Designer Austin Carlson brought their design experience to develop the initial concept into the LEGO Pirates nostalgia trip that the finished set became. But it was also their own fandom that made this set something extra special.

In this exclusive interview with Brick Fanatics, the two design talents explain how their own childhood experiences influenced their work on 21322 Pirates of Barracuda Bay.

What is your background with LEGO Pirates? Are you both fans of the theme?

Austin: It helps so much that basically the heaviest fans of Pirates worked on this. For Milan, Sam [Johnson, LEGO Ideas Design Manager] and me, this is our childhood. Being able to work on it… funnily enough when we were developing it last year, it was around when you released your Pirates issue of Brick Fanatics Magazine. The instant I saw that online I bought it because I was on such a Pirates hype during that time.

Milan: I have all of the original first wave and maybe half of the second wave of Pirates sets here at home, so there was a time when I was sat building classic Pirates sets again and again and again to learn the ins and outs of them… not that I needed to learn them, because I had built them as a kid. It was a real labour of love and good fun to pick up some of those references from when I was younger.

Austin: I have every original minifigure that I had when I was four years old and Redbeard is one of them. He’s one of the very first minifigures I had and I had him with me when I started designing the updated version of him. Essentially, we wanted to make this as like a love letter to our childhood experience while also refreshing where we need to.

How did the classic LEGO Pirates sets influence your direction? Even the packaging is influenced by the original releases.

Milan: There was a point where we working on it that Sam had the idea that this would be the set that was never released. We never did it in the end but we had ideas for a video where we would go into the archives and discover this lost set.

The idea was that you read the back of the original Black Seas Barracuda box, the story about Redbeard and his crew setting sail on an adventure, so what we wanted to do is add another page to that story and say the reason that Redbeard has not been around for years is because he has been lost. And then that kind of opens it up for you to continue the story again.

It was supposed to be another step in the journey of LEGO Pirates, discovering the set that never came.

Did you have any input Niels Milan Pedersen, the designer who developed the original theme?

Milan: I remember I sat down and I talked to him about how it was when he first made it, he talked to me about some of the funny stories he had from when he went to London to do the photoshoot for the original one, for the box, so it was nice hearing about the development of the original Pirates line.

As well as looking at classic LEGO Pirates, did you incorporate any pirate history into the model?

Milan: We were fully immersed in pirates, as Austin said. It was interesting trying to find he balance between the historical stuff and a toy. In the end I decided that part of the interesting thing about Pirates is how much of it is folklore and cultural and how little of it is historically accurate.

I think the only historic thing I can think of that I have got in the whole set is when Austin made Anne, the minifigure with the red torso, we chose to give her a machete instead of a cutlass and a flintlock pistol because according to historic sources that was what Anne Bonny used.