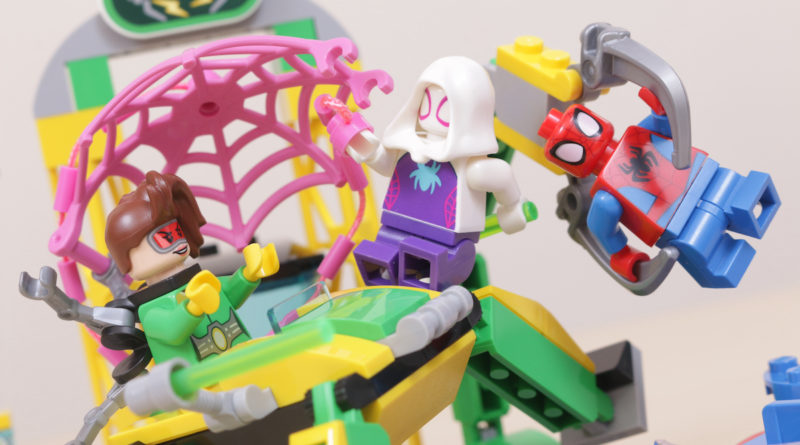 LEGO Marvel’s 10783 Spider-Man at Doc Ock’s Lab demonstrates how LEGO sets not even specifically designed for us can find their way into our collections.

Based around the Disney Junior property Spidey and His Amazing Friends and set at an age recommendation of 4+, the most recent wave of LEGO Marvel / LEGO Spider-Man sets released aren’t designed for you and me.

The 4+ moniker across these sets enters its fourth year post-Juniors, and serves as the introductory build level for new LEGO fans as they graduate in age and development from DUPLO.

In that way, 4+ sets are basic by design, simple in function and minimal for display and play. And yet, a wave like that for Spidey and His Amazing Friends comes out and we can’t help but pick up 10783 Spider-Man at Doc Ock’s Lab, and for any number of reasons.

Certainly, the LEGO experience leaves a lot to be desired for anyone old enough to read this, and particularly so with the page-turning, single-brick-by-single-brick build process that 10783 Spider-Man at Doc Ock’s Lab entails. It’s frustrating and boring, but remember, it’s also not for us.

As three final models, the car for Spider-Man, the walker for Doc Ock and the lab are all functional, cute builds with great colour, but also bulky, juniorised and with little to no play value – again because these aren’t designed for our level of LEGO engagement. As a collection this trio does tell a story, set a scene and create conflict between lead characters from the tie-in TV show, but as LEGO sets, their purpose is relegated to not much more than that.

Even so, as a LEGO set, 10783 Spider-Man at Doc Ock’s Lab is packed full of little details that really do entice an older LEGO fan, not least of which is the trio of minifigures. Each coming with the mid-size poseable legs, the character designs for Ghost-Spider (Spider-Gwen), Spidey and Doc Ock are all really quite brilliant and benefit from the brighter colour palette that the more juniorised interpretation opens up.

They are each new-for-2022 in design, with the Spider-based characters including new mask designs that include much bigger eyes – these may be stylistically to tie in with the TV show design where they are large, oversized, bobble-head characters, but interpreted in minifigure form they look great more generally speaking too, offering nice design updates for otherwise familiar characters.

Likewise, Doc Ock’s minifigure comes with an exclusive hair piece that looks great, and tops off a simple but effective overall design that gives an otherwise previously-male-only LEGO character a really distinctive new look that’s almost straight out of the Spider-Verse.

Beyond the minifigures, 10783 Spider-Man at Doc Ock’s Lab is packed full of interesting parts, including the rope and spider-web pieces in pink for the first time. The moulded and printed Spider-Bot is also a fantastic new addition and comes in at a nicely representative size too, while the printed screen featuring the same mechanical creature on it is another fun detail with better use elsewhere.

These inclusions are all little things, but they come together to create a package that appeals to Spider-Man fans for their novelty and what they bring in new ideas to the LEGO Spider-Man collection. Similarly, the small windscreen piece that is new for this set and 10782 Hulk vs. Rhino Truck Showdown may not look like much, but offers up some interesting build ideas for those that way inclined.

As mentioned, the main appeal to most about 10783 Spider-Man at Doc Ock’s Lab will be the included three minifigures, all of which feature unique, colourful and new-for-2022 updates on their appearance, across torso and face design. Doc Ock’s hairpiece is a stand-out mould that throws up all sorts of ideas for other character creations, while the bigger eyes for both Ghost-Spider and Spidey are refreshing updates.

This also becomes the cheapest LEGO set so far to be able to buy Ghost-Spider in, and that combined with the unique and eye-catching design for her outfit here cannot be overlooked. The only question, though, is also around Ghost-Spider and specifically her hood – could the designers not have used the other white hood design that shows more of the mask underneath?

Price is where any 4+ set is going to struggle, with consideration to builds that – without being disrespectful to them – are disposable to most older LEGO fans’ collections. That being said, something like 10783 Spider-Man at Doc Ock’s Lab begins to gain value and appeal when you look at the details throughout, from the great minifigure selection and design through to the particular pieces included, all of which are printed and some of which are brand new and exclusive to this small wave of sets.

At full price, 10783 Spider-Man at Doc Ock’s Lab may still be a stretch, but there’s enough inside the box that offers genuine value that it can’t fall too far out of many a LEGO fan’s focus too long, particularly later when it becomes discounted.

As mentioned at the top and made rather clear in the branding of the TV show this ties into (and the age recommendation plastered on the front of the box), 10783 Spider-Man at Doc Ock’s Lab isn’t for you and me. And yet, there’s so much about it that actually is.

The minifigures really sing in colour and design to offer some fresh updates, while the variety and number of new, useful and interesting parts scattered throughout are genuinely enticing.

This set was not provided for review by the LEGO Group – we bought it because we just had to.

Support the work that Brick Fanatics does by purchasing your LEGO Spider-Man sets through one of our affiliate links.

How long does it take to build LEGO Marvel 10783 Spider-Man at Doc Ock’s Lab?

It takes about 15 minutes to put together 10783 Spider-Man at Doc Ock’s Lab, with as much time required turning the pages of the instruction booklets as applying the single pieces each page adds on.

How many pieces are in LEGO Marvel 10783 Spider-Man at Doc Ock’s Lab?

There are 131 pieces included in 10783 Spider-Man at Doc Ock’s Lab, including three minifigures for Ghost-Spider, Spidey and Doc Ock.

The largest part to 10783 Spider-Man at Doc Ock’s Lab is the lab itself, measuring 13cm tall and 13cm wide. With the arms stretched out to a semi-reasonable length, it also comes in at around 13cm deep. Doc Ock’s walker is around 9cm tall with her sat in it and can stretch beyond 10cm wide in a variety of poses, while Spidey’s car is 5.5cm tall when he’s sat in it, 8.5cm long, and around 8cm wide with those legs sticking out each side.

How much does LEGO Marvel 10783 Spider-Man at Doc Ock’s Lab cost? 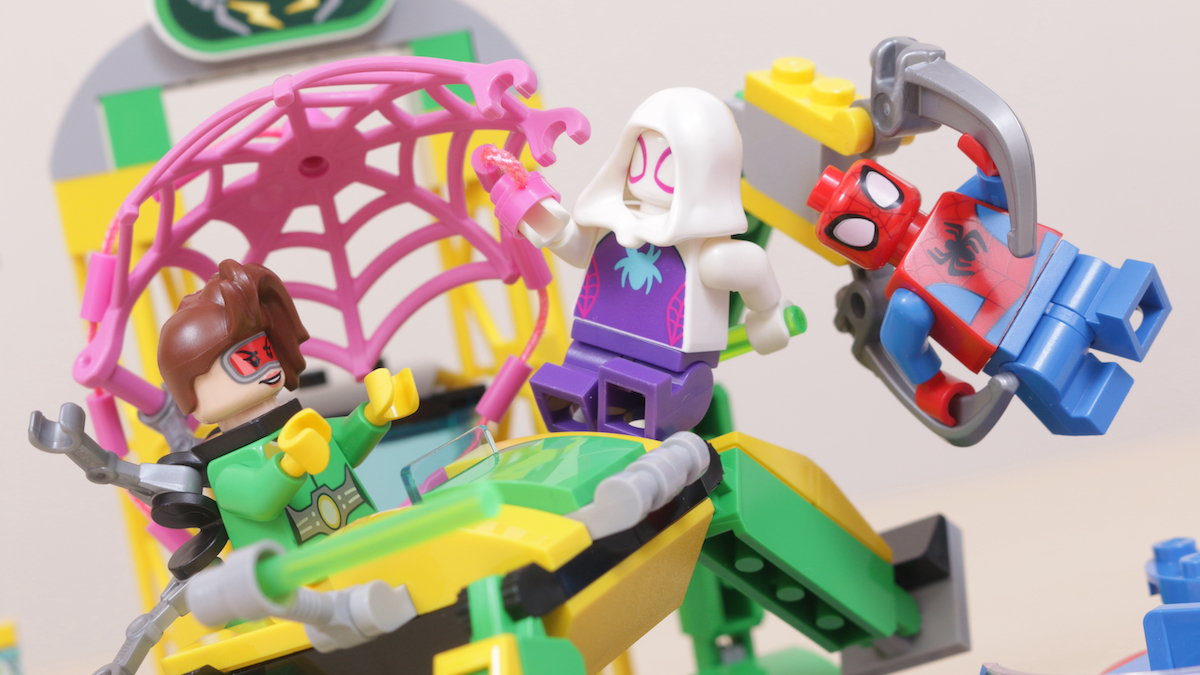