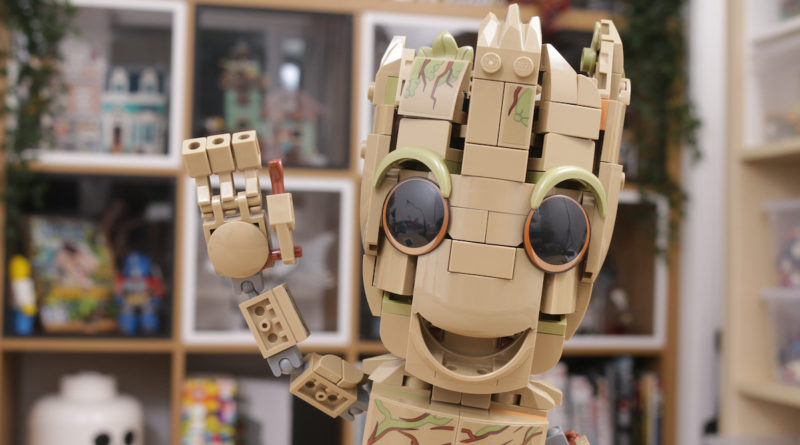 Move over Grogu, the title for the cutest LEGO set ever is now officially Groot’s, as LEGO Marvel’s 76217 I am Groot is packed with adorable goodness.

A LEGO set based on a buildable, large-scale Groot is as sure a slam dunk as the LEGO Marvel team could hope for, and in releasing 76217 I am Groot, they have more than made sure not to miss, offering up one of the sweetest little LEGO dudes we’ve ever built.

Packed with character and LEGO design ingenuity, 76217 I am Groot is a fun, adorable LEGO set to be sure not to miss in this 2022 summer wave of releases.

Perhaps in line with the likes of 76191 Infinity Gauntlet, 76209 Thor’s Hammer and the just-announced 76223 Nano Gauntlet, 76217 I am Groot is a larger-scale LEGO model of something well-known and much-loved from the Marvel Cinematic Universe. But where that aforementioned trio are all recognisable, solid items, Groot is a beloved and highly-organic character.

For how fondly he is thought of by fans, putting him into LEGO form won’t have been a hard decision to make. However, for how unique and recognisable he is and for the particular shaping to his character, he also won’t have been the easiest of sets to create.

That 76217 I am Groot so brilliantly captures the very essence of the little guy as he appears in Guardians of the Galaxy Vol. 2 is pure testament to the achievement of the LEGO Marvel team. And because of the sheer complexity of Groot’s frame, 76217 I am Groot also makes for an incredibly unique and quite wonderful three-dimensional puzzle to put together, step by step (even if the instruction booklet carries that quite forgettable new artwork on the cover).

From the torso down through to the legs, then across both arms and most definitely in his head, Groot is a real wonder to put together – and packed with a number of great examples of exactly why LEGO designers are celebrated as they are. In particular, how you piece together Groot’s head is fascinating, and it is accomplished through a design that demonstrates remarkable understanding of the LEGO medium.

Whenever something round is created out of sharp-edged and generally square LEGO bricks and plates is a notable feat, but with 76217 I am Groot it’s something that is taken to a whole new level of LEGO building. This is apparently a set with a 10+ age recommendation, but honestly it could have come with the 18+ label and would still stand out as one of the most rewarding LEGO builds of 2022.

Once complete, Groot looks just as you would hope he wood – sorry, would. Sweet in expression, diminutive in stature and wooden all over, Groot’s proportions and all-round positive, fun energy exudes from 76217 I am Groot. If there’s a feel-good LEGO set for 2022 (and do we need those…) then this is it.

That adorable face may not be too adjustable, but the expression that is caught is just perfect. It is also wonderfully accentuated through the variety of poses that the model allows for, thanks to ball joints across the arms, hips and knees. Baby Groot is a bit of a dancer and any number of moves are possible in LEGO form.

76217 I am Groot comes with a display plaque and also a very smart cassette tape build that sits almost perfectly as a 1:1 replica – neither the plaque nor tape were necessary here but add a nice extra level of display to the set, even if your eyes will rarely wander away from Groot himself.

76217 I am Groot comes in at £44.99 / $54.99 / €49.99. While that’s not instantly affordable, it does place the little guy very fairly priced in comparison with other buildable characters you may find in the LEGO Store, such as 75318 The Child. For how brilliantly accurate and insanely well-designed 76217 I am Groot is as a LEGO set, it more than delivers on value.

76217 I am Groot is one of the unmissable LEGO sets of 2022. Sure, it’s easy to guess that making a LEGO set of one of the cutest characters from the Marvel Cinematic Universe would be a success, but for just how utterly brilliant this model is to build and for how truly fun and adorable he looks when complete, 76217 I am Groot still manages to surprise us so pleasantly.

Support the work that Brick Fanatics does by purchasing your LEGO Groot through one of our affiliate links – thank you!

How long does it take to build LEGO Marvel 76217 I am Groot?

76217 I am Groot is split across three sets of numbered bags, and he takes about 45 minutes to put together in total.

76217 I am Groot contains 476 pieces, split between building Groot, an Awesome Mix cassette tape and a fun display plaque.

76217 I am Groot measures around 26cm tall and spans 23cm from fingertip to fingertip. Accounting for depth, his feet measure 6cm long.