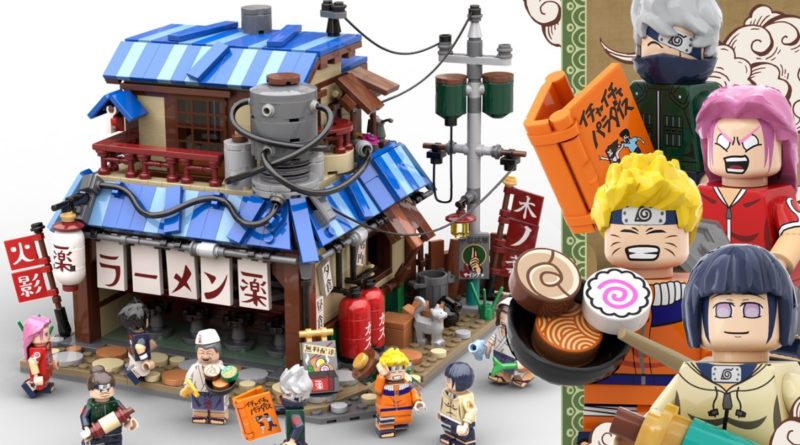 A LEGO Ideas project based on Naruto’s Ichiraku Ramen restaurant has reached the review stage for the second time in just over a year.

David and Diego Escalona’s original Naruto-inspired project hit the 10K mark in August 2020, but was ultimately rejected in the second 2020 review in February 2021. Undeterred, the brothers revised their initial pitch and submitted a new version to the Ideas platform in April 2021, and it’s now gathered the necessary support to advance to the next stage of the crowdsourcing process.

This time around, David and Diego have linked the build to the anime’s 20th anniversary in 2022, presumably because they’ve twigged that the LEGO Group loves an anniversary. For instance, 21328 Seinfeld was revealed on the anniversary of the sitcom’s first episode, while this year has also seen the LEGO Group celebrate both Harry Potter and NINJAGO’s respective anniversaries with golden minifigures.

That’s not the only update to their original project, however, with their newest take on Naruto’s Ichiraku Ramen shop featuring new colours, more detail, a market stall and a fully-accessible interior for the main building. All in, the model consists of roughly 1,600 pieces, and the brothers have suggested (and designed) eight minifigures to accompany the build.

David and Diego are no strangers to success on LEGO Ideas – their island castaway model took top prize in this year’s coastal contest, and will become a future gift-with-purchase – but if this project gets the green light next year, it will be their first regular retail set.

Naruto: Ichiraku Ramen Shop – 20th Anniversary now joins eight other projects in the third 2021 review, the qualifying window for which will be open until the beginning of January 2022. Here’s a full rundown of every model in contention so far:

Click here for a comprehensive rundown of every approved LEGO Ideas set currently in production.