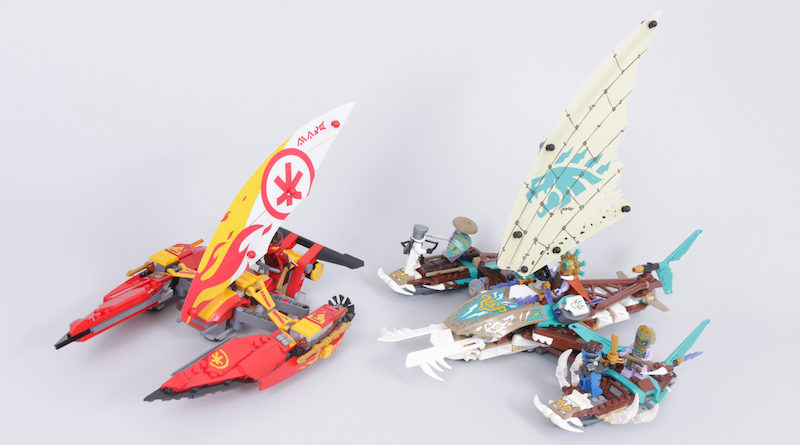 71748 Catamaran Sea Battle pits two unusual LEGO vehicles against each other in a way that only LEGO NINJAGO can pull off.

How many catamarans has the LEGO Group produced in its history? Surprisingly, it’s not very many at all, and 2021’s 71748 Catamaran Sea Battle is in fact only the sixth-ever version of this sea-faring (unless you’re a Wookiee) vehicle to be made in brick form.

It’s less surprising, though, that the eclectic theme of chaos that is NINJAGO is the one to visit this watercraft next, and to do so in all its action potential and, at that, include two within the set (sort of).

Built in such scale and colour that only NINJAGO can manage, 71748 pits two catamarans against each other, and even serves as subtle tribute to the LEGO Group’s first ever catamaran from way back in 1994.

That was 6256 Islander Catamaran, released 27 years ago as part of the Islanders sub-theme of Pirates. And whilst almost three decades’ worth of design and budget is so clear to see, there are design nods across this latest NINJAGO wave that are clearly taken from the land of the Islanders.

Indeed, the Keepers’ design palette is one that not only serves as tribute to that classic theme of yesteryear, but that also helps to instantly create a series of characters and vehicles that are vibrant, styled as only the LEGO Group can, and at once feel familiar and brand new. Into its second decade as a theme, this is what we’ve come to expect of NINJAGO now, and it doesn’t disappoint.

Between them, though, is a pair of fun LEGO models that in creativity and play bounce off one another nicely, across some simple play features and pure real estate of LEGO space. Those play features include spring-loaded shooters (of course) and transforming effects for both catamarans – Kai’s folds up into what the LEGO Group calls ‘speed mode’, whilst the Keepers’ one can retract some spears from the central hull and splits into three separate boats.

As a younger fan, those are pretty much the play features you’d want from such a set, particularly the ability to split the larger one into three smaller vehicles. But for anyone looking for a more complex build across techniques and functions, this isn’t a model with the potential to deliver. It’s aged at 9+, and that’s an appropriate marker for expectations.

That’s really where the compromise is felt – these are nicely-designed vehicles and the instructions do include a test or two for less experienced builders, but ultimately they come in at a specific level and anyone above that may feel a twinge of disappointment. It’s only a twinge, because if the concept of the set – two catamarans head-to-head in a race and/or combat – has pulled you in, there’s little else to be disappointed by.

There are six minifigures included in 71748 Catamaran Sea Battle, with three apiece between the two sides of the battle at hand. Island Zane, Island Kai and Island Jay make for at least one hero too many in this set, whilst none are actually exclusive to it. With the one, smaller catamaran for the three of them to protect/fight around, the story needs at least one ninja to be held captive on the Keepers’ catamaran. Luckily, there’s a slide-out slot for just that.

For the size of that larger catamaran, though, swapping out one of the three ninja for a fourth Keeper would not have been the worst decision to take, particularly for the interesting design and accessory selection each of them has in this set (again, none are exclusive here). Their design is where inspiration from Islanders and Adventurers can best be felt, from the shield and mask, to Chief Mammatus’s headdress that is reminiscent of King Achu’s, from more than 20 years prior.

NINJAGO continues to push the boundaries of where next to take the hero ninja, and whilst not every adventure will land with every NINJAGO fan in quite the same way, the variety on offer remains refreshing, both in story and design. That’s very much the case with 71748 Catamaran Sea Battle, and if a large-scale catamaran race/duel takes your fancy, there’s little to suggest you won’t get your money’s worth here.

There’s nothing quite like NINJAGO, every half-year reinventing itself whilst still maintaining some semblance of continuity in story and character. The trip the team has taken this time brings with it a new assault of colourful enemies to face off against, yet again in a unique environment and with new vehicles in tow.

How tied you may be to the actual story being played out in 71748 Catamaran Sea Battle (or, for that matter, any of the NINJAGO sets) doesn’t always matter – what makes sense is the colour, interest and action built into this model. For long-time NINJAGO fans and collectors it’s something new, whilst for others coming in, it’s something fun, even if a little simpler than other large-scale NINJAGO sets can be.

If you want a LEGO catamaran set more grounded in modern reality, Technic’s 42105 Catamaran remains available, but for anyone looking for one of NINJAGO’s most unique creations in recent years (and that’s really saying something), this delivers the colour, style and vehicle design as only NINJAGO does.

How long does it take to build 71748 Catamaran Sea Battle?

It takes a surprisingly longer time than you may otherwise expect to build 71748 Catamaran Sea Battle, thanks to the larger vessel’s more intricate construction, weighing in at roughly an hour. That doesn’t translate into a complex final model, though.

How many pieces are in 71748 Catamaran Sea Battle?

The Keepers’ catamaran measures around 29cm in height (with some variance depending on how you position the sail – for instance, the LEGO Group says the height is actually just 22cm). When the catamaran is fully extended it measures 37cm long, whilst it is also 23cm wide. Meanwhile, Kai’s catamaran comes in – when fully extended – at 17cm tall, 23cm long, and 16cm wide.

How much does 71748 Catamaran Sea Battle cost?