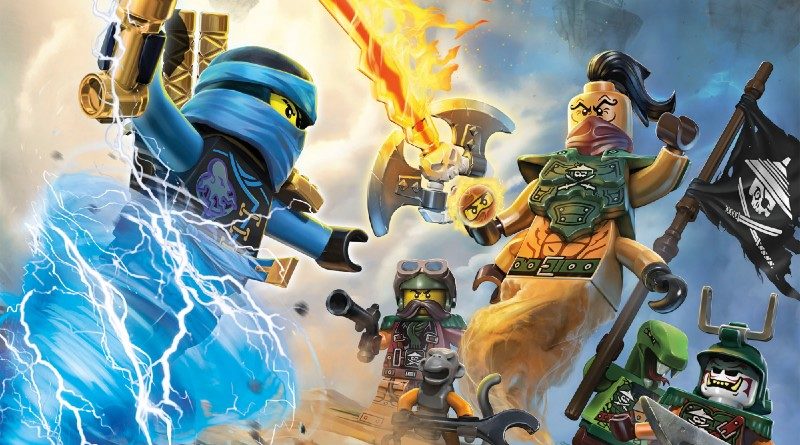 So far the ninjas have faced snakes, stone warriors, ghosts, cultists, the embodiment of evil itself and robots. Clearly, the design team realised that the next logical step in this ladder of villains was pirates led by a wish-granting Djinn. Nadakhan and the crew of Misfortune’s Keep were the antagonists for the sixth season of the show.

Skybound saw an ancient artefact fall into the hands of Clouse, a lackey of Master Chen who had escaped the cursed realm. Using the Teapot of Tyrahn, the Djinn pirate Nadakhan was released and granted Clouse his three wishes. Unfortunately, Nadakhan twisted his words and earned his freedom. From there the pirate antics ensued and Nadakhan claimed the realm crystal for himself, travelling realm to realm rescuing his stranded crew. The final stop was his home realm of Djinnjago, which because of the ninja’s actions in season 5, was slowly fading away.

Angered at the loss of his home, Nadakhan sought vengeance against the ninja and tricked each one into defeat, one by one. Eventually, Jay and Nya were the only ones left standing, with Jay having one wish left. Using his final wish, he reversed time to before Nadakhan had escaped the teapot, with only him and Nya remembering the events of the season. They would come to share the story with the other ninja in time, but for now, the Teapot of Tyrahn, and presumably a very angry Nadakhan is yet to be found in the world of NINJAGO.

This season saw the release of 11 sets and four polybags, one of which was 70599 Cole’s Dragon, a creature that was never seen in the show, and presumably cut late in development. In fact, the LEGO Group has provided some concept art including that of the original design for the dragon, not made from bricks. The sand green parts of the concept art remained in the model, apart from the talons, and the dragon overall had a more bird-like stance.

The latter half of the year would not be filled with a season as normal, with the NINJAGO team well in the development of the upcoming movie, which was announced in 2016 and was due for release in 2017. Rather than leave the second half of the year empty, however, NINJAGO had a small break of sorts, with only a 45-minute special, roughly the length of two episodes.

Cole, who was now a ghost after the events of the Possession season, and the rest of the ninja were celebrating the Day of the Departed, a national holiday in NINJAGO that promoted remembrance of loved ones who had passed, and an important day for many of the team. After meeting at the museum for a tour of the new ‘Hall of Villains’ exhibit from new character Dr Saunders, the team split up to have the day with their families. Kai and Nya chose to visit their original blacksmith home, and remember their parents who had been lost since they were children.

Zane remembered his inventor and father, Dr Julien who had passed away after the second season. Lloyd went with his mother to remember Sensei Garmadon and the rest of the ninja spent the time with loved ones. However, Cole had been forgotten and was beginning to fade away in his ghostly form. Worried and angry he rushed to the Temple of Airjitzu to confront Sensei Yang, who had transformed into a ghost previously. However, it was all a trick and Cole accidentally freed the spirits of almost every villain the ninjas had faced so far.

Each of the villains hunted one of the ninjas down, with the group separated across NINJAGO island. Meanwhile, Cole fought Sensei Yang to eventually gain back his human form. The two came to an agreement and Cole helped the cursed master free his students of the curse, leaving Yang to haunt the halls of the Temple of Airjitzu forever, not as an enemy but as a hidden ally to the ninja. There were a few sets this season that allowed the NINJAGO team to visit past seasons such as 70595 Ultra Stealth Raider, a remake of the Ultra Sonic Raider from 2012.

The year to come would prove influential for NINJAGO, bringing a blockbuster movie to the big screens and bringing one of the biggest changes to the theme to date.