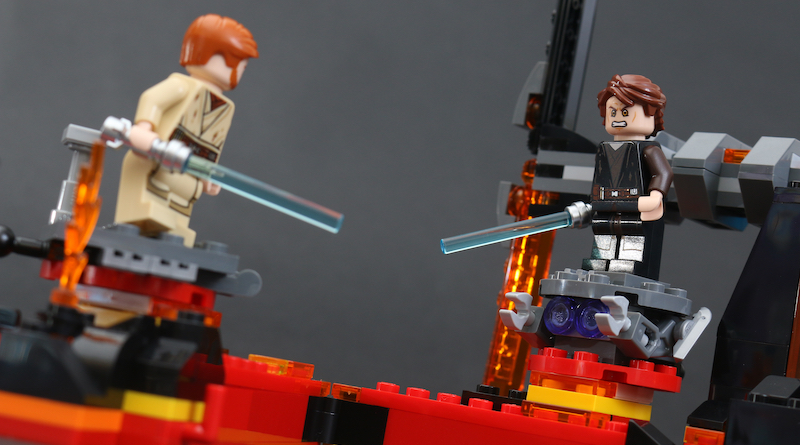 LEGO Star Wars’ recent trend towards location-based playsets has produced some of its very best LEGO sets, offering a great mix of both play and display, and a unique opportunity to explore some of the worlds that make up this galaxy far, far away.

75269 Duel on Mustafar is the latest release to do this, taking more than the one leaf out of 75236 Duel on Starkiller’s book, taking a climatic scene between two of one of the film’s lead characters and adapting it into a two-base build.

Most immediately striking, though, in completing 75269 Duel on Mustafar is its colour palette, packed full of bright red, orange and yellow. It of course captures the volcanic scenery of Mustafar perfectly but also, in many ways, across a collection grey, black and white Star Wars ships, creates a set that offers unrivalled vibrancy on display.

It’s has clearly been designed for play, and this is achieved very much in the same manner as 75236 Duel on Starkiller Base, in that there are two bases connected by hinges to create an opening and closing diorama. Place a Jedi on either side of the chasm between and bring them closer and further away from each other with the hinge.

In comparison to 75236, though, it may only come in at 17 more pieces, but it’s a much larger final display and, more importantly, a far more engaging play experience. Whilst both are based around this same hinged base mechanism, where 75236 Duel on Starkiller Base’s other feature was generally just a collapsing tree, 75269 Duel on Mustafar more dynamically builds into the model moving platforms, which slide along parallel to each other and rotate. It creates a whole lot of movement in the set – sideways, across and around – for a more perfect experience of both display and play.

75269, importantly, isn’t without its fair share of falling scenery too, in the form of a large frame that can act as either descending debris from the building Anakin and Obi-Wan fight through, or as a walkway for them to duel across.

75269 Duel on Mustafar very clearly takes design points and inspiration from 75236 Duel on Starkiller Base, but perhaps through a mix of lessons learned from that set and the greater creativity offered by the source material this time around, vastly improves both the play and display format. Alongside colour selection across the set that shows great attention to detail and true commitment to the subject material, plus the fact that both minifigures are updated, new designs of classic Jedi characters, there’s a lot to love about this set. You’ll be humming John Williams’ Anakin vs. Obi-Wan theme in no time.

75269 Duel on Mustafar is available from December 26 in the UK at LEGO.com. You can help support Brick Fanatics’ work by using our affiliate links.

One thought on “LEGO Star Wars 75269 Duel on Mustafar review”