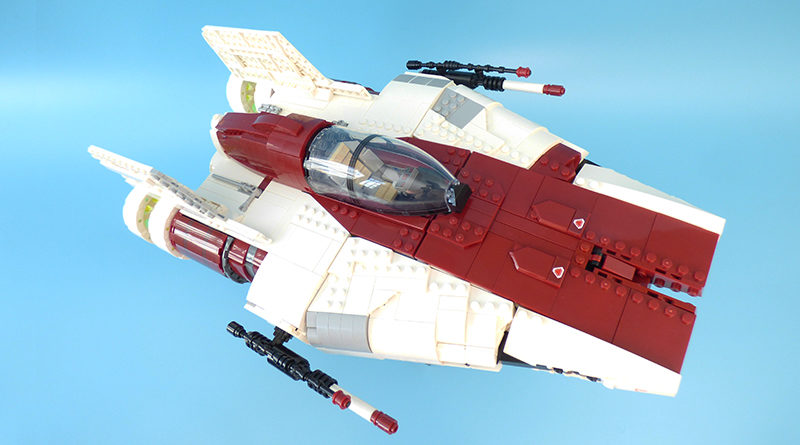 It has been 20 years since the LEGO Star Wars theme introduced the Ultimate Collector Series (UCS), a run of sets that has offered detailed, large scale models based on memorable star ships – with a focus on the classic trilogy. When realising that the series has been running for two decades, it is perhaps more forgivable that it has recently revisited some of the most iconic Star Wars vehicles, including 75192 Millennium Falcon, 10240 Red Five X-wing Starfighter and 75181 Y-wing Starfighter.

Fans have grumbled that it is time for something new again and now they have the opportunity to put their money where their irate comments are. 75275 A-wing Starfighter brings the Rebel ship that has so far been overlooked to the high-end range of LEGO models, finally ready to sit alongside the other Alliance icons including 10227 B-wing Starfighter and 10019 Rebel Blockade Runner.

Introduced in Return of the Jedi, the A-wing offers something visually distinct from the X-wing, Y-wing and B-wing. Those other ships have a real functional feel to them, clearly looking as if they have been cobbled together or at least rescued from falling apart. While they are attractive ships, that careful movie design is hidden beneath the impression that they are the best the Alliance has, maintained just enough to fly into battle. In the case of the A-wing though, it has a much sleeker appearance, as if it has not long rolled off the production line.

This must have made it a more challenging model for the LEGO design team to tackle, as elements lend themselves better to utilitarian design than the smooth, curved shape of the A-wing.

It will be no surprise that this model begins with a Technic frame, building up a sturdy core for the model. It feels unusual when compared to some of the Rebel ships mentioned above, as this time around it forms a large rectangle. The stubby shape of the A-wing means that despite its tapering front, it can all be based around a very simple shape.

The way the front section is achieved is relatively simple, but it is a method that is probably more commonplace in fan models than LEGO Star Wars sets. Two sections are attached at angles with Technic pins, so they sit at an angle, creating the sloped section in front of the cockpit. Curved white elements at the side hide the inner workings.

One of the challenges the LEGO Group has with these starships is deciding whether to sticker details or build them in. In 75275 A-wing Starfighter the latter method is used, with NEXO shields providing shapes seen on the actual A-wing. They are a great fit in terms of shape and show an attention to detail, but at a plate’s thickness they are sitting a bit too high when compared with the film prop.

Connected either side of that front sloping section are two sub-assemblies, which use two connection points to attach to the rest of the model. It is an excellent example of building a separate component to allow for an unusual shape. It is very satisfying to drop the 2×6 angled piece into the gap to complete that part of the model and find that it fits absolutely perfectly. What is even more impressive is that there are just two connection points on each of these sections, positioned in such a way that it makes for a solid attachment.

Using a selection of curved pieces and multi-directional building, the top cockpit section manages to recreate the actual A-wing’s shape pretty much perfectly. It is one of the places on the model where there are no visible studs and it works. The pilot’s chair also deserves special mention, as while it isn’t revolutionary, it captures the shape and feel as well as anyone might ask for.

There was almost an opportunity to congratulate the LEGO Group when it came to stickers here. A second set of stickers #1-5 was included in this review sample. Unfortunately, only one set of stickers #6-8 were included. The latter are the significantly more horrible ones to apply, as they must be carefully applied to the transparent cockpit. Given that the double stickers are mentioned in the instruction book’s supplementary material for precisely this reason, hopefully this was an error and most boxes will include the duplicate sheets, to reduce the pressure felt when applying them.

One part of the build that seems very clever are the side sections at the back. The red cylindrical sections are put together as sub-assemblies, before being attached by a little brick built ‘hook’ and Technic pin to create just the right look. Unfortunately, not long after being attached it is clear that this is not a particularly stable solution. A second proper attachment point would probably have helped here. Once on display, it will not be a problem, but until the A-wing is sitting still it remains a source of frustration.

At the end of the model, it is time to add the guns on either side. In another intelligent design move, Technic elements were added at the very beginning, with the axles left exposed when adding side sections. It is right at the end that these exposed axles are finally completed by having the rotating blasters attached, allowing for 180 degree rotation.

Incredibly, this is a swooshable set. The solid construction means that it can happily be flown around the room, which is a tall order for a set marked 18+ that only really needs to be able to sit proudly on its display stand.

On the topic of the display stand, it serves its function and allows for the ship to be facing left, right, forward or backward, which is handy for display.

Completing the package is the A-wing pilot, a new minifigure with excellent detailing. The helmet deserves special mention, with incredibly intricate details printed on it.

While it may be expected now that the LEGO design team will conjure up a beautiful model worthy of display, it still deserves comment that they have not just dreamt up this model, they have constructed it in such a way that it can be recreated from an instruction book. The consideration that goes into finding solutions that builders can copy at home and still create a build this impressive has really paid off.

75275 A-wing Starfighter feels like a labour of love, with real attention to detail paid to the source material leading to a finished model at a satisfying scale. It makes for a worthy of addition to the Ultimate Collector Series and will add a striking splash of colour to a shelf full of such sets. Quibbles with this release are very, very minor – this is the first time the A-wing has been captured as a UCS model, and fans will not be complaining if it is also the last.

75275 A-wing Starfighter is available now at LEGO.com. You can help support Brick Fanatics’ work by using our affiliate links. 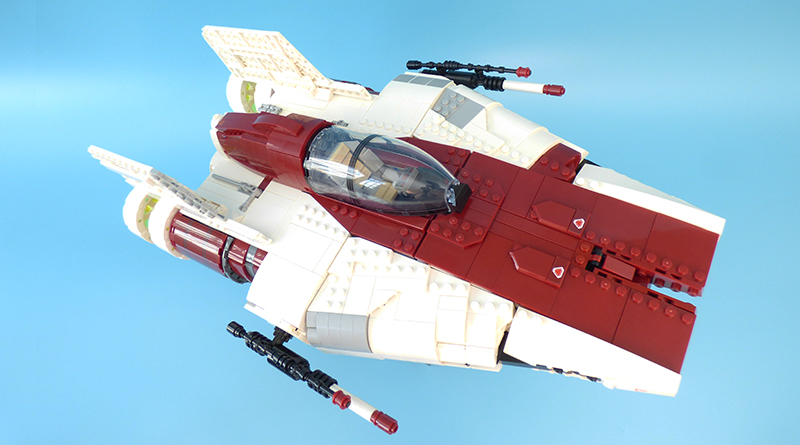