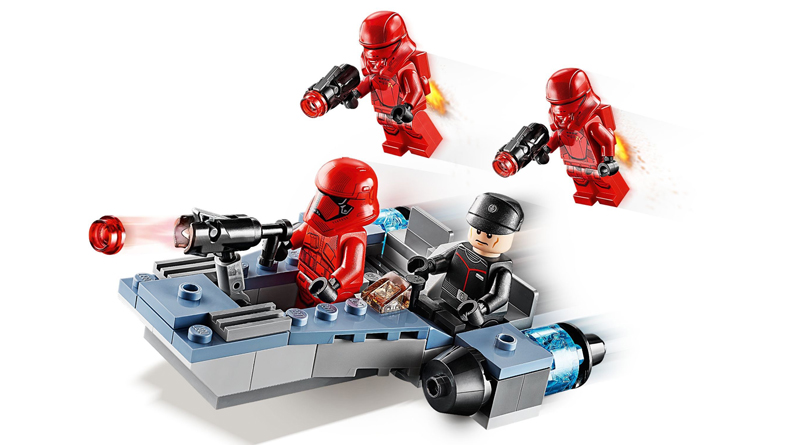 Some of the fan-favourite LEGO Star Wars sets are also the smallest. Brick Fanatics counts down the five best Battle Packs

LEGO Star Wars Battle Packs first arrived back in 2007 to get multiple minifigures in a low-priced set, including some bricks to avoid contraveing any licensing agreements. They have since become a fan-favourite way to build Stormtrooper armies or grab unique minifigures for a low price.

Each one follows the same basic principle with a combination of characters included alongside an environment or vehicle designed to capture the spirit of a galaxy far, far away. With almost 30 stellar Star Wars battle packs released so far, choosing the five best was quite the challenge…

Many great Battle Packs have been inspired by the prequels, offering fans the chance to boost their Clone Trooper collections, but it is the exclusive Jedi minifigures that make 75206 Jedi & Clone Troopers Battle Pack such an interesting set. Young Padawan Barriss Offee utilises the relatively new LEGO skirt element to great effect, and the second appearance of Jedi Master Ki-Adi-Mundi is perfect for a fan build of the Jedi Council. Even the vehicle, which looks like a Republic Gunship (LAAT/i) that has shrunk in the wash, allows for a fun, miniature taste of the dramatic conflicts of the Clone Wars.

A ruthless elite Imperial commando unit led by Iden Versio, Inferno Squad was introduced in the single-player campaign of the Battlefront II video game. Over the 20 years of the LEGO Star Wars theme, a sparse selection of sets have been released based on video games, so 75226 Inferno Squad Battle Pack is a stand out because of its unusual source-material.

Yes, infuriatingly only Iden herself has a distinct head-piece, even though players meet the entire team, but the incredibly detailed armour and signature red printed TIE helmets of the squad more than make up for that slight oversight.

Star Wars fans love some scum and villainy in their collection and 75167 Bounty Hunter Speeder Bike Battle Pack comes with almost every unscrupulous bounty hunter seen in Darth Vader’s line-up on the bridge of the Executor in Episode V.

Even though the set is inspired by the more fun, cartoonish aesthetic of The Freemaker Adventures, the blue speeder-bike still captures the essence of those seen zipping across Endor. However, 75167 really deserves its spot on this list just for being the debut of 4-LOM as a minifigure, combining a brilliant head-mould with hexagonal printing to capture his insectoid eyes.

After a certain baby from The Mandalorian series on Disney+ nearly broke the internet, toy manufacturers everywhere have been in design overdrive. While 75292 The Razor Crest will introduce The Child as a minifigure in September, 75267 Mandalorian Battle Pack is providing fans with Mando goodness while we wait.

What’s particularly striking about 75267 is that it’s the first appearance of female Mandalorian minifigures after Sabine Wren, with distinctive helmet visors portraying the subtle difference. A few copies of 75267 would be the ideal way to populate a MOC of the Mandalorian enclave’s showdown on Nevarro…

With each sequel trilogy film introducing new Stormtrooper forces, it’s no surprise that the First Order have numerous LEGO battle packs. So why is 75197 First Order Specialists Battle Pack one of the best? Well, currently it’s the only set to include the ominously titled First Order Stormtrooper Executioners, made distinct by the black stripe covering half of their helmets. Another reason is that although the ancillary model may look laughably ridiculous – a spider-like laser gun emplacement – it is actually quite fun to fire the flick-missiles at unwitting Resistance scum across any living room.

Some ideas in the LEGO Star Wars theme may have come and gone (here’s looking at you constraction figures), but battle packs are an evergreen concept that are here to stay. They are the type of set that doesn’t necessarily need inspiration from new Star Wars films or television series, but rather that can mine the almost endless catalogue of interesting yet fleeting background characters that help make the galaxy far, far away feel so whole.