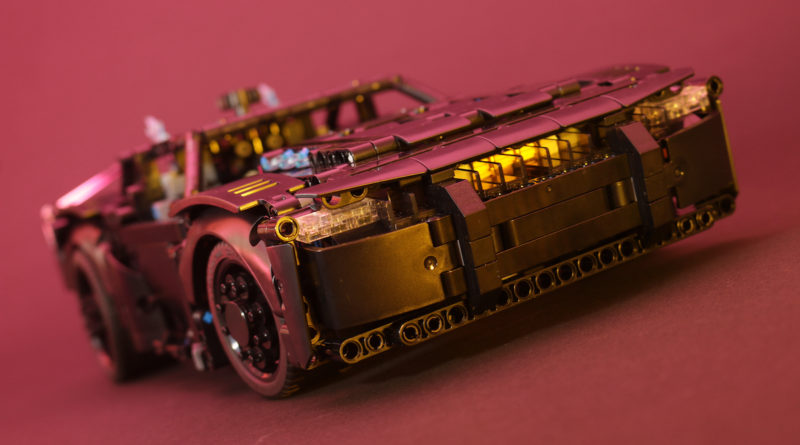 LEGO Technic 42127 The Batman – Batmobile looks like being the saving grace of an otherwise bad selection of sets for The Batman.

There is a lot of anticipation for what Matt Reeves, Robert Pattinson and company have in store for us when The Batman finally hits theatres in March 2022. With shooting and scheduling hit by more than one lockdown during the pandemic, the first instalment of this new take on Batman is long-awaited and carries with it a lot of promise and a lot of intrigue.

That is for many reasons, including the creative direction being taken that – judging by what has been communicated in interviews and glimpsed at in the trailers so far – hints towards a detective noir-style of visuals and story, perhaps even more grounded in (an alternate) reality than that of the Dark Knight trilogy.

It’s another new creative aesthetic for Batman following on from Christopher Nolan’s work and that of Tim Burton and the 1960s television show before it. Yet translating this into LEGO form has seemingly made for a trio of the most bafflingly boring and simplistic sets, and a Technic set that at first glance looks more like a second Fast & Furious release for the theme than a first-ever Batmobile.

However, that it is a Technic set is seemingly 42127 The Batman – Batmobile’s saving grace, and indeed that of the entire mini-wave of releases. Where there’s no hope (nor much point) in adapting The Batman into a trio of sets like 76179 Batman & Selina Kyle Motorcycle Pursuit, 76181 Batmobile: The Penguin Chase and 75183 Batcave: The Riddler Face-off that are all age-recommended between 6+ and 8+, 42127 The Batman – Batmobile sits in the more complex stylings of Technic, and that makes it much better than it could otherwise have been.

It is what Technic offers as a creative medium that really elevates the potential quality and all-round experience of 42127 The Batman – Batmobile, far above the other sets planned for The Batman and towards any number of the wonderful vehicles Technic has created and built in recent months and years.

It’s not as complex as something like 42110 Land Rover Defender, as the inner mechanisations don’t build a working engine, but there’s certainly enough within this Technic creation to appreciate and learn from, as a handful of functions and every conceivable angle are worked into the design of this Batmobile. The functions include steering (activated with a gear at the top of the model rather than via the steering wheel), opening doors and bonnet and two light bricks – one that lights up what we assume is an engine in the front and one that lights up what is definitely a rocket-style engine in the back.

All these functions are excellent and add some fun and interactivity to 42127 The Batman – Batmobile in a way that really brings out elements of the vehicle we have already glimpsed in trailers. The lights also brilliantly work in contrast to the all-black colour-scheme and really pop out in a very effective way. As a collection of functions too, the moving and light-up parts also help put the more than twice-the-price 76240 Batmobile Tumbler to real shame – building playability into something that looks awesome on display isn’t that hard, is it?

And where the moving and light-up parts do bring playability, 42127 The Batman – Batmobile also does indeed still look awesome on display, thanks to those aforementioned angles built into and across its design. The most obvious angle may be created by the larger wheels at the rear of the car, but there are hidden areas of the vehicle that contribute just as much to an intriguing build and satisfying final model, particularly that are worked into the front end.

There’s a lot to take in about 42127 The Batman – Batmobile and to appreciate, even if comparisons to the movie version of the car may prove a little problematic, from a certain point of view. That’s primarily focused around the rear corners of the car, which should flick up into finer points than the Technic version allows for. There must be parts within the Technic library capable of such an effect, but perhaps they could only be worked in at the expense of upping the cost of the set.

The only other issues are around the complexity of the model – it could have leaned even more into what Technic is capable of that standard LEGO bricks are not, but for reasons around budget and not wanting to alienate a wider Batman audience from what is a first-ever Technic Batmobile, the choices made for 42127 The Batman – Batmobile are both logical and have not wholly impacted the quality, enjoyment or accuracy of the final set.

Coming in at £89.99 / $99.99 / €99.99 is fairly typical for a Technic set of this size, and beyond little aspects like the steering not being functional from the steering wheel and the back winglets not mimicking the shape of the on-screen version, there’s little to criticise 42127 The Batman – Batmobile for. Technic sets always provide as much a challenging build as a well-shaped, solid model, and this one is no different – it’s authentic in pretty much every way you want it, particularly at the price it is.

This is the first-ever LEGO Technic Batmobile, but thanks to smart design and an interesting and at-times-tricky build, 42127 The Batman – Batmobile sits comfortably next to the other large-scale Bat-vehicles of recent years, and in functionality even puts the far more expensive 76240 Batmobile Tumbler to shame too.

42127 The Batman – Batmobile is far from definitive, and there are areas a more advanced selection of parts (and a higher budget) could have added to the Technic set, but there’s plenty to admire and enjoy with what is here.

Importantly too, look beyond the official imagery of the set before considering purchasing. It does the set no favours, flattening the details and angles that have been carefully worked into the model. If any of the four sets coming out (in November in the US and January in the UK and Europe) for The Batman are worth taking note of, it’s 42127 The Batman – Batmobile.

Support the work that Brick Fanatics does by purchasing your LEGO through one of our affiliate links. You can also keep track of every LEGO Batman deal, sale and promotion this Black Friday with our dedicated VIP Weekend, Black Friday and Cyber Monday pages.

How long does it take to build LEGO Batman 42127 The Batman – Batmobile?

It takes around six hours to put 42127 The Batman – Batmobile together, across seven rounds of numbered bags.

How many pieces are in LEGO Batman 42127 The Batman – Batmobile?

There are 1,360 pieces included in 42127 The Batman – Batmobile, as well as a small sticker sheet with three stickers on it.

42127 The Batman – Batmobile measures 45cm long and 18cm wide, whilst the tips of the blue flames are the highest point some 12cm from the ground.

How much does LEGO Batman 42127 The Batman – Batmobile cost?

One thought on “LEGO Technic 42127 The Batman – Batmobile review”