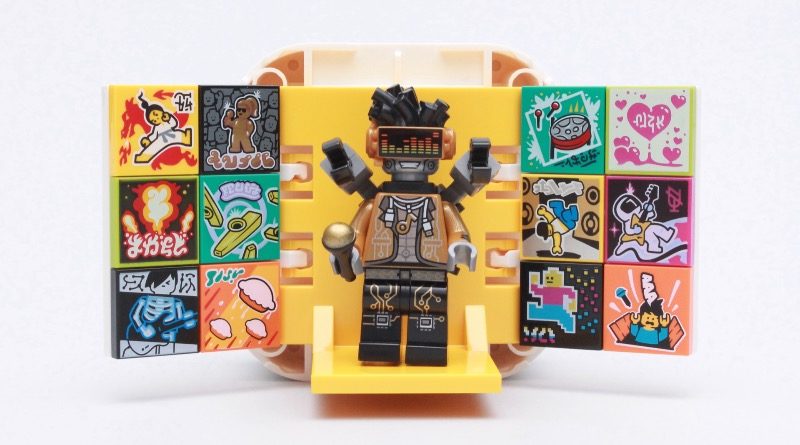 LEGO VIDIYO 43107 HipHop Robot BeatBox delivers a very cool minifigure in a very expensive package – and one that doesn’t necessarily fulfil the criteria of what a LEGO product should be.

We don’t think it’s unfair to say that the reception to LEGO VIDIYO hasn’t been universally positive among the wider LEGO community. And with its BeatBoxes launching at a third off at most UK retailers, including Zavvi, it feels like the writing is already on the wall for the LEGO Group’s latest digital experiment.

If you’re still considering giving the theme a go, though, is it worth diving in with one of those cut-price BeatBoxes? Or – heaven forbid – paying full retail price if necessary, just to see what this intersection of LEGO and music is all about?

Whatever price you end up paying for 43107 HipHop Robot BeatBox (or any of its five contemporaries), the build – or lack thereof – will essentially be the same. The part count alone should clue you into the fact that there’s not much in the way of a traditional LEGO experience on offer here.

That extends not just to the very brief build, which basically involves laying down a few tiles on the back of the box in a two-dimensional pattern, but also to the fact that the bulk of the box is comprised of entirely new elements, created exclusively and specifically for this purpose.

You don’t need to be a master builder to know that that’s basically antithetical to the core nature of LEGO bricks. But you can also see how, for what these products are, it’s completely necessary: creating a small enclosure like this with traditional pieces definitely wouldn’t be sturdy enough to be portable.

Just as they are in 43101 Bandmates, the printed 2×2 tiles – or BeatBits – are a highlight, regardless of whether you plan to scan them into the app or not. You’ll find 16 in each BeatBox, though only two of those are unique, while the rest are randomly distributed between each one. Given the retail price of these things, that ratio feels incredibly miserly.

Twelve of the tiles can be displayed on the folding panels that sit either side of the BeatBox’s interior structure, with the rest stored around the back (and held in place by the mosaic pattern you put together earlier). It’s a neat solution, but again, one that feels very purpose-driven.

That feeling is unfortunately the one that will stick with you long after you’ve finished the extraordinarily quick build 43107 HipHop Robot BeatBox provides. Everything here feels so far beyond the scope of what usually constitutes a LEGO set that it’s hard to really reconcile it with the brand at all, let alone the rest of your collection.

VIDIYO’s predecessor in the field of digital play, Hidden Side, worked nicely as a range of mostly solid sets that just happened to offer an augmented reality experience, if you were so inclined to try it out. But even if you didn’t, you’d still be left with something worthwhile. It’s hard to say the same about 43107 HipHop Robot BeatBox.

Beyond those printed BeatBits, this is where you’ll find the real star of 43107 HipHop Robot BeatBox. (It’s in the name!) The entire range of BeatBox minifigures is far and beyond almost anything included in 43101 Bandmates, and the same holds true for this rapping robot.

That’s predominantly by dint of his killer headpiece, but the detailed head, legs and torso – complete with wrist printing – also sweeten the deal, while the extra arms imbue it with a real sense of character that certain other VIDIYO minifigures seem to be lacking. But… is a single minifigure alone worth £17.99?

The answer is no. Some minifigures may be worth that amount of money (or even more), as anyone who’s tried to complete their LEGO Star Wars collection through BrickLink will glumly attest to.

But this particular minifigure definitely can’t warrant a £17.99 investment all on its own, and given how little value you can derive from the rest of what’s inside 43107 HipHop Robot BeatBox, there’s pretty much no scenario in which you should be paying full price for any of these sets.

At £11.99, the current price at Zavvi, it becomes a little more palatable – and at £4.80, as at least one Asda store has recently priced another BeatBox, it’s almost rude to say no. But there’s a world of difference between those prices, and the only way you’re going to feel the full benefit of this set at either of the higher tiers is if you’re also planning to get really into the accompanying app.

We’ll address whether the digital experience can add any real value to the VIDIYO range in a future review, but on the basis of the LEGO alone – as this review considers – your best bet, as the LEGO Group has almost itself acknowledged through allowing and putting the mechanisms in place for those third-party day-one discounts, is to cop it on sale, and even then only when really heavily reduced.

It’s easy to see what the LEGO Group was aiming for with VIDIYO’s 43107 HipHop Robot BeatBox and its counterparts. This is a collectible toy in all respects, and one that can be carried around and played with anywhere and everywhere. But are those the only two criteria for something to fall under the LEGO brand?

For most of us, the answer will likely be a firm no: a LEGO product should offer at least something in the way of a build experience (and one worthy of the price you pay). 43107 HipHop Robot BeatBox doesn’t, and as a result, feels like a toy any other company could have produced – but not one the LEGO Group necessarily should have produced.

Support the work that Brick Fanatics does by purchasing your LEGO from LEGO.com / Zavvi through one of our affiliate links.

How long does it take to build 43107 HipHop Robot BeatBox?

You’ll spend all of five minutes putting together 43107 HipHop Robot BeatBox, and that’s if you take it at a leisurely pace.

How many pieces are in 43107 HipHop Robot BeatBox?

There are just 73 pieces in 43107 HipHop Robot BeatBox, but several of those are the brand new, enormous and exclusive elements used to create the pod.

Like all LEGO VIDIYO BeatBoxes, 43107 HipHop Robot BeatBox’s finished pod measures more than 8cm tall, 7cm long and 10cm wide. Small and sturdy enough to carry around, if you so choose.

How much does 43107 HipHop Robot BeatBox cost?