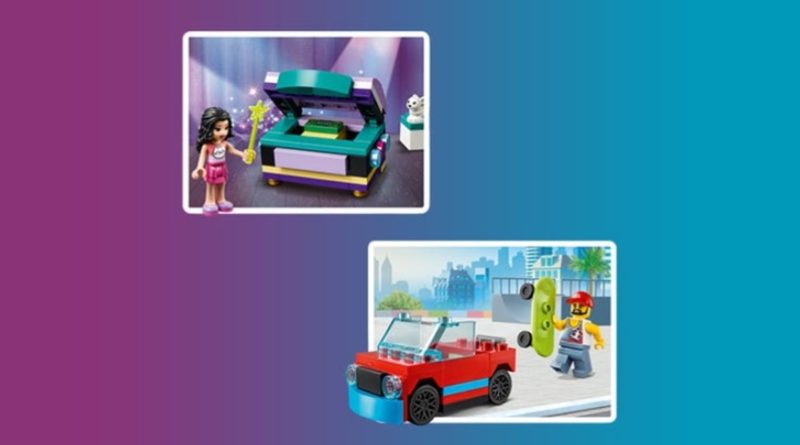 The UK LEGO online store has started a promotion for October, with a returning offer that allows you to pick between a CITY and Friends polybag.

Whilst the US has a deal currently live to let you choose between a small diver and flower stand set from CITY and Friends respectively, the UK storefront has now launched a similar offer, but with two previously-available polybags instead.

Returning from their initial introduction in July, the LEGO Group clearly has plenty of stock remaining for both LEGO CITY 30568 Skater and LEGO Friends 30414 Emma’s Magical Box, both of which are themed to the various subthemes and sets as part of the larger 2021 waves.

Rather than earning one or the other depending on what you theme you order from in the US, those of you in the UK need only enter a code at checkout once spending £40 on any purchase. For 30568 Skater, enter SK11 and for 30414 Emma’s Magical Box, enter MG11.

Also still scheduled to be available on the official UK store until October 5 is a mystery gift with orders over £170. Click here if you’d like to see what you’ll be getting for free or don’t if you’d like to keep the surprise. Be aware that this appears to be out of stock at the time of writing, but may yet return.

Anyone buying 10284 Camp Nou – FC Barcelona can also get the exclusive LEGO for Adults 40485 FC Barcelona Celebration GWP. The returning polybag promotion is also live in Europe, with codes MGC5 and SKT5 at checkout.