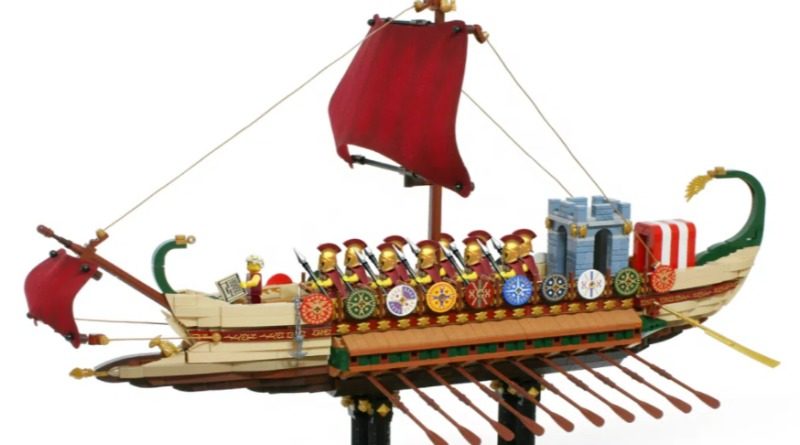 LEGO Ideas could be about to set sail for the ancient world, as a Roman Warship design has become the latest project to attract 10,000 supporters. The galley-style ship will now be considered for release as a future set at the next LEGO Ideas review stage.

The design is based on historic ships that were used throughout the Roman period to transport legionaries across the vast Roman Empire. The build is adorned with decorative shields and features fabric sails and rope, similar to previous LEGO Pirates sets. Built to minifigure scale, the vessel is manned by a crew of 10 soldiers following the commands of their Emperor at the helm.

The ancient vessel stands atop an attractive display base, decorated with gold finials and a name-plate. The base plate also features two prowling tigers. Although unintentional on the part of the designer, these tigers now provide a nice nod to the recently-released 10276 Colosseum. This icon of the ancient world, now rendered in LEGO form, once played host to gladiators pitted against fearsome animals like the tiger.

The giant Colosseum set has already sold out with back orders not expected to ship until late January. Perhaps this will be seen as an indication that there is a strong interest in LEGO sets based on the Roman era, and sway the LEGO Group in this Warship’s favour when it is reviewed.

Rival toy company Playmobil has for several years now released sets based on Ancient Rome, including a warrior’s ship. Perhaps it is time for the LEGO Group to do the same.

Roman Warship is the 22nd build to reach the next review stage. The other projects it will be competing against are: