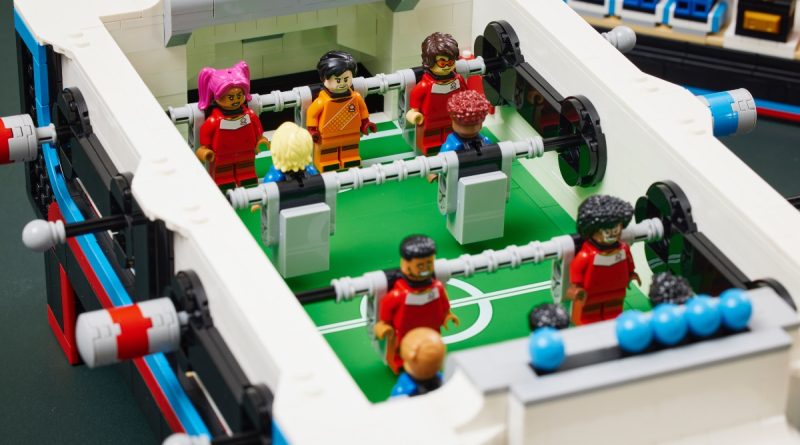 From its single new element to the sheer number of people who tested it, here are six things you probably didn’t know about LEGO Ideas 21337 Table Football.

Given the green light as a result of the LEGO Ideas ‘We love sports’ contest, Donát Fehérvári’s foosball table endured a fraught development process that almost saw it cancelled altogether – and which the design team has been surprisingly candid about.

In doing so, they’ve shared far more about the perils of green-lighting a digitally-designed set than ever before, and offered unique insights into how 21337 Table Football eventually came together. Here are just six.

6 – LEGO already had a foosball table in the works

When the LEGO Ideas team gave the green light to Fehérvári’s design, they apparently did so without knowing that the company’s brand team had already hatched plans for a LEGO foosball table, with the express intent of using its minifigures to broaden representation.

“Our brand team has an agenda to drive diversity and inclusion, and when we worked with them, we learned that they were also planning to create a foosball table when this was in the works,” LEGO Ideas Design Manager Jordan Scott told Jay’s Brick Blog. “So instead of developing two sets, we brought both forces together and found this was the perfect opportunity to show diversity and inclusion.”

5 – More than 300 people were involved in testing

LEGO designer Samuel Johnson has called 21337 Table Football ‘probably the most tested LEGO set of all time’. That’s through the company’s usual rigorous machine testing and heat-testing, but also through manual testing – in fact, Rambling Brick reports that more than 300 people were involved in pushing the prototypes of the table to its limits. That speaks to the set’s intense development process, which reportedly saw at least six or seven initial designs ‘completely destroyed’.

One obvious solution to the LEGO Ideas team’s design problems – which centred on the company’s existing assortment of cross axles bending and snapping – is the introduction of stronger, purpose-specific parts. Senior Marketing Manager Monica Pedersen acknowledges that might have helped, but not soon enough: “We probably could’ve made it work with some new elements, but then we would launch in 2025.”

3 – …but it does include one new piece

Presumably the timelines for creating new elements vary, however, because 21337 Table Football apparently does include at least one brand new piece. According to Rambling Brick, the set’s ball is a new weighted version of the existing element – a relatively minor change to a current piece, which may have been enough to accelerate its new design in time for 21337 Table Football.

21337 Table Football includes an overwhelming 44 different heads, 43 different hairpieces, 22 torsos and 22 pairs of legs, allowing football fans to create two 11-a-side squads at once (even if the pitch can only handle two five-a-side teams). That was ultimately done in the interests of ‘representation, diversity and inclusivity’, but Johnson says the team did initially consider ‘plain red and blue’ minifigures. “When you look at football today, it’s very diverse, and everyone has their own style, so we wanted to give that back,” he added.

1 – The timing of its release is completely deliberate

Cementing the LEGO Ideas team’s assertion that its successful projects are ‘all about timing’, 21337 Table Football arrives on shelves in the same month the 2022 World Cup kicks off in Qatar – and that’s no coincidence. “We really wanted to give this set to the world at this specific time of year, where football is the biggest it’s ever been,” Johnson explained.