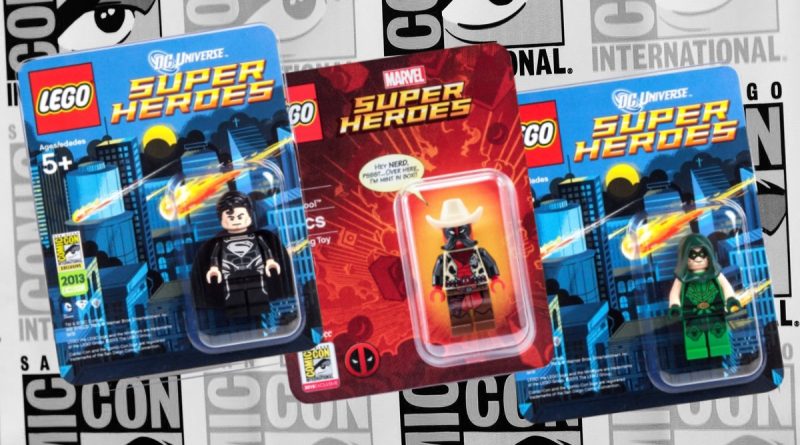 As the LEGO Group reportedly calls time on its SDCC-exclusive minifigures, we’ve run the numbers to find out which of the existing characters are most valuable on the aftermarket.

From 2011 to 2019, the LEGO Group gave lucky attendees of San Diego Comic-Con the chance to pick up extremely limited – and totally exclusive – minifigures, each enclosed in its own unique blister packaging. It skipped the practice for 2020’s cancelled physical convention, however, and instead launched a series of planned exclusive sets through retailers in the US.

The first physical SDCC since 2019 is now underway, but with no LEGO exclusives whatsoever – which will apparently be standard from here on in. If that’s true, it means it’s now possible to pick up a complete collection of SDCC-exclusive minifigures through the secondary market. As long as you’ve got ridiculously deep pockets, anyway.

To put the price of these sought-after minifigures into perspective, buying all 27 released to date at their current lowest price on BrickLink would set you back an eye-watering £34,542.23 (and that’s before shipping). That kind of cash is probably beyond most of us, but we can at least revel in the insane prices some of these characters command. From Spider-Man to Superman, here’s the 10 most expensive of the bunch…

Tied at 10th place are 2014’s The Collector and 2019’s PS4 Spider-Man, both of which are available from the same BrickLink store for €950 (or £809.46) apiece. The former character played a fairly major role in the original Guardians of the Galaxy movie, so it’s no surprise he’s a hot item among collectors (it’s in the name), while Spidey’s unique outfit is not only pretty cool in and of itself, it’s also required for a complete collection of Spider-suits. If you have the budget…

Beyond the occasional Wolverine-shaped bone the LEGO Group deems fit to throw us, X-Men minifigures are few and far between in the Marvel line-up. That goes some way to explaining the incredible value of 2012’s Jean Grey in Phoenix Costume, but it’s not the whole story: this is also the only Jean Grey minifigure ever, and her torso, legs and double-sided head are all exclusive to SDCC. You’ll need to spend $1,056 (or £880.34) at BrickLink to add her to your collection.

There’s a new sheriff in town, and his name is Wade Wilson. Maybe the best kind of SDCC minifigure, 2018’s Sheriff Deadpool is the kind of zany character variant most of us could happily do without, but offers something fun and new for hardcore collectors. His detailed (and unique) head, torso and leg prints are all perfect, and likely go some way to explaining his minimum price of €1,050 (or £894.67) on BrickLink.

Perhaps the biggest surprise in this list is 2013’s Azog, which actually isn’t an exclusive minifigure at all. The exact same character was widely available in 79014 Dol Guldur Battle, which landed on shelves later the same year as part of the second wave of The Hobbit sets – so the SDCC version’s appeal lies almost entirely in its packaging. There are only two available on BrickLink at the time of writing, starting at an incredible $1,170 (or £975.38).

The second Spider-Man minifigure in this list is the simpler of the two so far, but perhaps also the cooler – with a price that reflects that assertion. More iconic to comic collectors and movie fans alike, Spider-Man in Black Symbiote Costume was originally available at SDCC in 2012, and only three examples are currently for sale at BrickLink. The cheapest of those will set you back a whopping €1,350 (or £1,150.29).

Now we’re talking. Giving a superhero a monochromatic makeover is apparently an instant recipe for driving up its value, and it’s seen 2013’s Superman in Black Costume soar to an eye-watering $3,500 (or £2,917.80) on BrickLink. What’s probably had a bigger impact on that value, though, is the fact that only 200 of these minifigures were ever produced – far fewer than, say, 2014’s Batman of Zur-En-Arrh.

Two years before Green Arrow debuted at retail in 2015’s 76028 Darkseid Invasion, the LEGO Group released the archer in a blister pack at San Diego Comic-Con. He’s still pretty rare as DC characters go, having only appeared in three retail sets, and the SDCC version remains the only hooded variant – which helps to explain why he now fetches upwards of £3,186.41 on the aftermarket.

Beyond the MCU, the LEGO Marvel theme mostly focuses on Spider-Man – often to the chagrin of the adult fan community. But this list almost provides the evidence for that strategy, because both of the most valuable SDCC minifigures of all time are webslingers. In second place comes 2013’s Spider-Woman (not to be confused with the less detailed version that appeared in 2016’s 76057 Spider-Man: Web Warriors Ultimate Bridge Battle), who starts at – wait for it – £5,930.99 on BrickLink. Yikes.

Have you clocked yet that a complete collection of Spider-Man minifigures is probably beyond the reach of 99% of LEGO fans? If not, here’s the icing on the cake: 2013’s SDCC-exclusive wall-crawler, which is based on Marc Webb’s The Amazing Spider-Man 2 (a film that’s otherwise never had any tie-in sets), will cost at least $11,040 – or £9,203.57 – to obtain from BrickLink. That’s nearly 512 copies of 76219 Spider-Man & Green Goblin Mech Battle, or 34 Daily Bugles. For one minifigure.

If SDCC exclusives truly are no more, it’s difficult to say what will happen to these prices – they could rise to reflect what’s now a retired and complete collection of minifigures, or they could drop as collectors move on to the next big thing. Our money’s on the former, though. Just not enough money to buy one of these minifigures…