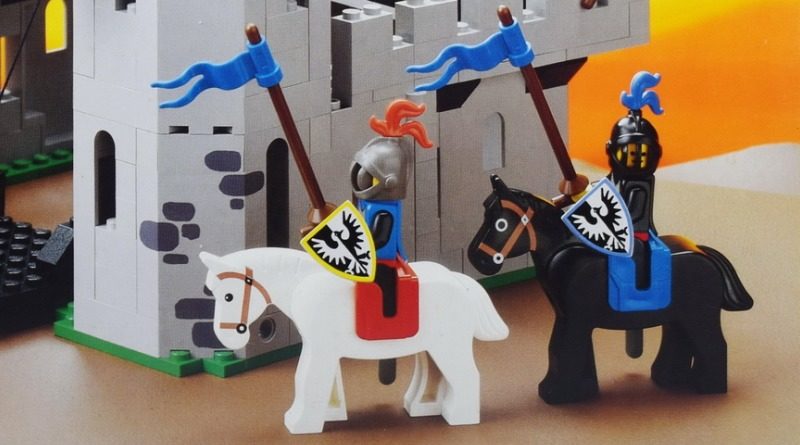 Not sure why the knight minifigures in LEGO Ideas 21325 Medieval Blacksmith are so noteworthy? Brick Fanatics digs into the archives to bring you a primer on the legendary Black Falcons.

The very first LEGO Castle set appeared in 1978 alongside the introduction of the minifigure, in the aptly-named 375 Castle (now commonly referred to as the ‘Yellow Castle’). Much like the bright walls that built up that fortress, the accompanying knights were a colourful bunch. But six years later, a new pack of uniform black-and-blue soldiers arrived on the scene in 6073 Knight’s Castle.

While they were never officially labelled as the Black Falcons – a 1989 catalogue once referred to them as ‘Guardians’ – it’s the name they’re now known by among the fan community, largely thanks to the 1986 set 6074 Black Falcon’s Fortress (even if the position of the apostrophe suggests the Black Falcon is just one person).

This new band of knights subsequently popped up in a total of six sets during the original Classic Castle years, making a final appearance in 1988’s 6035 Castle Guard. That was the last time Black Falcon minifigures would appear in a set until 2002, when the soldiers’ 1986 castle was re-released under the Legends banner as 10039 Black Falcon’s Fortress.

Since then, the faction’s emblem has shown up twice more – once (rather unexpectedly) as decor in 2005’s Harry Potter 4768 The Durmstrang Ship, and once in 2012’s 10223 Kingdoms Joust, printed on to the Falcon Knight’s shield. The LEGO Group never confirmed that minifigure as intentionally belonging to the Black Falcons, though, which means 21325 Medieval Blacksmith is technically the first time we’ve had soldiers from the faction in almost two decades.

That makes it a pretty momentous model for Classic Castle fans, and also ties the largest castle-themed set ever released to the sets that helped pave the way for it. Much as 21322 Pirates of Barracuda Bay paid tribute to a historic LEGO Pirates set, 21325 Medieval Blacksmith has planted its flag squarely in nostalgia territory through its minifigures, bringing the Black Falcons into the modern day.

For more on the latest LEGO Ideas set, including its release date and price tag, click here. Alternatively, head through here for a full gallery of images, including a peek inside the fully-enclosed building. Finally, you can check out all the minifigures – including those Black Falcons – right here.

21325 Medieval Blacksmith will launch on February 1. In the meantime, be sure to check out all the images, and take a closer look at all four of its minifigures – and one brand new horse.