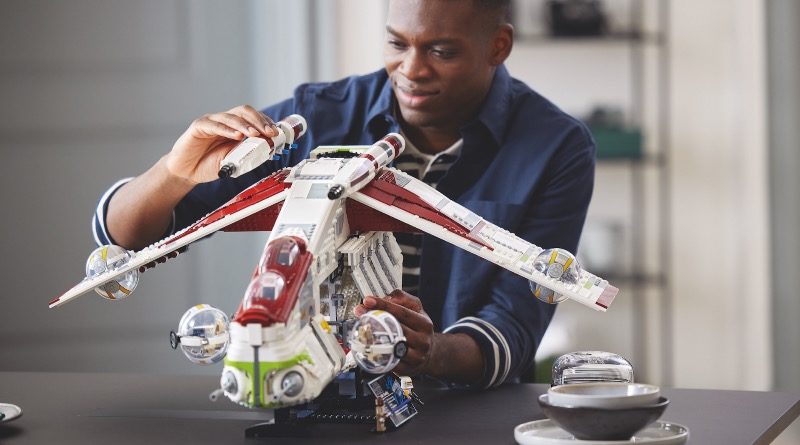 Few LEGO sets have proved as polarising as LEGO Star Wars 75309 Republic Gunship – but why is this brand new Ultimate Collector Series model causing so much controversy in the online community?

Across Facebook, Instagram, reddit, YouTube and LEGO fan sites, we’ve seen plenty of outcry about the newly-unveiled 75309 Republic Gunship, which only entered production after winning a LEGO Ideas poll in February 2020. More than 30,000 fans voted for the prequel trilogy set above a potential UCS TIE Bomber or UCS Nebulon-B Frigate.

Now that the Gunship is finally here, though, the reaction hasn’t been quite as positive as the LEGO Group surely hoped. On the surface, it looks like most of the diatribe is focused squarely on the minifigure selection in 75309 Republic Gunship (despite the fact it’s ostensibly a display model).

Bundled in with the enormous set are minifigures of Mace Windu and a generic Clone Trooper Commander, both of which are exclusive, but neither of which are super-desirable characters for LEGO collectors. But if this really is a display model (and the minifigures therefore aren’t the main selling point, as they often are for smaller playsets), why is there so much focus on the choice of characters included in the box?

Before we get to the meat of the answer, you should first know that the LEGO Ideas poll that paved the way for 75309 Republic Gunship also asked users which minifigures they’d like to see included in the set. And while the LEGO Group hasn’t revealed the results of that particular part of the questionnaire, it’s hard to imagine Mace Windu (a character we’ve seen plenty of times before) and a generic Clone Trooper would have topped it.

With that in mind, it’s not difficult to see why many LEGO Star Wars fans feel like they’ve been ignored. You don’t have to look far to find strings of negative comments – here’s a reddit thread or two – and YouTuber MandRproductions has even published a video accusing LEGO designers of thinking fans are ‘stupid’.

But as Ryan explains in that clip, the real heart of the issue actually appears to lie in quotes from the LEGO Star Wars design team that were originally reported right here on Brick Fanatics. The designer of 75309 Republic Gunship, Hans Burkhard Schlömer, took part in a roundtable interview with LEGO Fan Media prior to the set’s reveal, and it’s his answers that seem to have riled the online community.

Let’s take a look at just a few of the quotes in question:

“We put in two minifigures for good measure, because people expect it – even though we keep saying with a model like this it’s really not about minifigures. We put in minifigures that are appropriate, but I personally feel they shouldn’t be super-rare collector’s items. It’s just not okay to put a super-rare minifigure into a super high price point, because not everybody can afford it, and those minifigures will be super-sought-after.”

Fair enough, right? No point walling off hugely-desirable characters behind expensive sets. Nobody wins when that happens. Except – as plenty of fans have pointed out – it happens all the time in other sets, and the LEGO Group doesn’t seem to blink an eye. Perhaps more egregious in the eyes of the online community, however, is the following:

Guess how long it took for that quote to become a meme. As you can read over on reddit, or Instagram, or practically any place where LEGO fans gather online, this quote has sparked particular outcry because it suggests the design team doesn’t appreciate how deeply LEGO Star Wars fans understand the tiny and specific differences in characters, outfits and vehicles.

As reddit user AdamBomb0088 put it: “That one sentence shows such a detachment between the designers and their target demographic. I’d argue that Star Wars fans (and especially LEGO Star Wars fans) are some of the most uptight about every detail being accurate. To say that all people notice is a clone with yellow markings is so off the mark.”

It’s also a pretty bizarre stance to take, given the lengths to which minifigure designers routinely strive across the wider LEGO Star Wars theme for accuracy and detail, even with obscure characters – like those that populate last year’s 75290 Mos Eisley Cantina. Finally, this quote hasn’t gone down brilliantly online:

“We do hope there is a demand. I mean, you told us, ‘We want this, we want it to be reasonably big,’ and I hope that not everybody will now say, ‘No, I don’t like the minifigures,’ or ‘I’m not buying it because I don’t like that brick there.’ So yeah, I guess if you want to see more sets like this, go and buy it.”

Ryan (or MandRproductions) took the entire design team to task here, stating in his reaction video: “Honestly, the designers have really got to read the room here. They are directly speaking to a group of fans who – rightfully or not – feel like they have been deprived of some of their favourite ships and scenes in the form of LEGO Star Wars for way too long.”

This isn’t to say that everyone is having a hard time with 75309 Republic Gunship. Redditor Patchen35, for example, made the very reasonable observation: “Everyone voted for it, then everyone complained it didn’t come with a bunch of minifigures. [The LEGO Group] won’t be able to make these people happy no matter how hard they try.”

Even in those same reddit threads and Instagram posts, there’s been plenty of positive reception to the Gunship, too. Really, what’s so unusual about this narrative isn’t that a LEGO Star Wars set is facing criticism – it’s that opinion is so severely split down the middle, and that much of the backlash appears to have been prompted directly by comments from the design team, rather than anything to do with the set itself.

For the LEGO Group, the only question that really matters is whether the group of users currently lambasting 75309 Republic Gunship are the same 30,000 who voted for it in the first place – and whether, therefore, it can expect to find an audience when it lands on shelves on August 1.

While you wait for the latest Ultimate Collector Series set to deploy from Billund, check out our detailed review, which examines the worthiness of 75309 Republic Gunship beyond just its minifigures. (There are 3,292 pieces in the box, after all.)

One thought on “Why are people so unhappy with LEGO Star Wars 75309 Republic Gunship?”