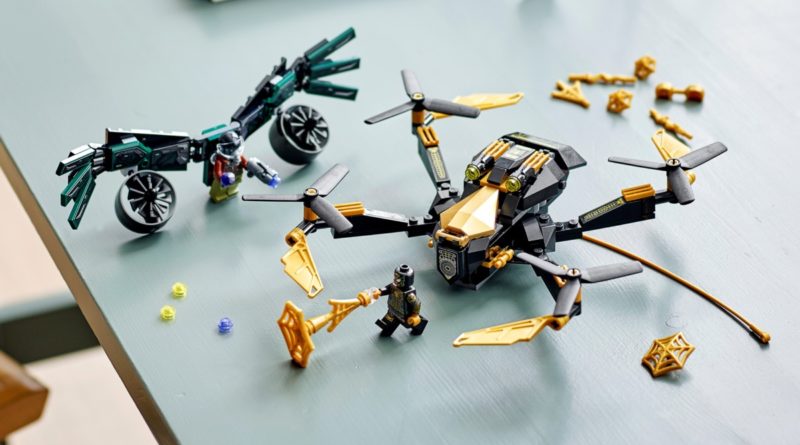 The LEGO Group has published more images of 76195 Spider-Man’s Drone Duel, giving us our best look yet at the web-slinger’s new black and gold suit.

While the Marvel set is apparently based on the events of Spider-Man: Homecoming, featuring the friendly neighbourhood superhero facing off against Vulture, the suit Spidey is wearing is definitely not from the 2017 movie. Based on other merchandise launching in the months ahead, it’s safe to assume that it will actually show up in December’s Spider-Man: No Way Home.

That suggests 76195 Spider-Man’s Drone Duel could actually be a huge spoiler for the events of the threequel, which will also involve Doctor Strange and possibly the multiverse. We’ve already delved into that theory here, and these fresh images of the black and gold suit only reinforce its potential.

You’ll be able to get your hands on this detailed new Spider-Man minifigure from October 1, when 76195 Spider-Man’s Drone Duel launches at LEGO.com and LEGO Stores alongside 76184 Spider-Man vs. Mysterio’s Drone Attack and 76185 Spider-Man at the Sanctum Workshop.

You can check out more new images of that latter set – which includes minifigures of Doctor Strange and Wong alongside Spider-Man and MJ – by clicking here. Spider-Man: No Way Home will swing into cinemas on December 17, but we’re still waiting on a first trailer.

One thought on “Closer look at LEGO Spider-Man: No Way Home’s new black and gold suit”