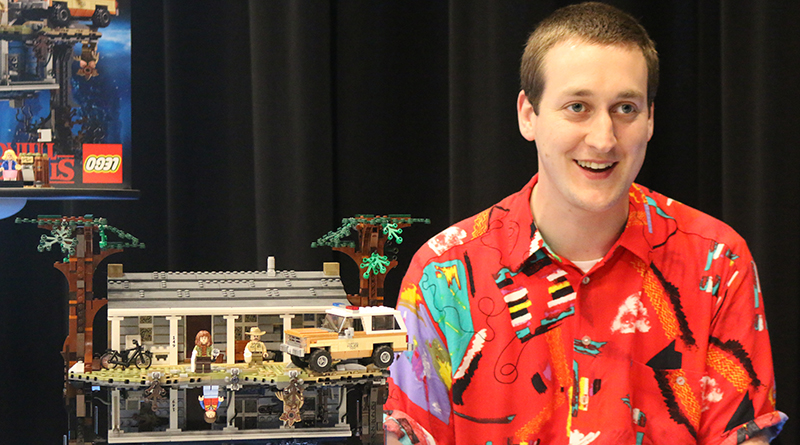 For LEGO Senior Model Designer Justin Ramsden, Stranger Things 75810 The Upside Down was more than just work – it was a dream assignment

LEGO Senior Model Designer Justin Ramsden was delighted when he heard the news that there was to be a product based on Stranger Things. His design process for 75810 The Upside Down involved plenty of hands-on building and iterating to ensure that the gravity-defying model would do justice to the popular series.

As well as being a huge LEGO fan, Justin is a huge Stranger Things fan – as he discussed in this exclusive interview with Brick Fanatics.

What was your experience of Stranger Things, before the LEGO set, when you were just a fan?

It came out of nowhere for a lot of people. One day I came home after a hard day of building and walked into my living room and my girlfriend said, “I’ve just seen the best TV show ever on Netflix.” I said, “well, let’s sit down and watch it again”. We literally binged the whole series in a few evenings.

I was just struck by how it refences some of my favourite films that I grew up and how it is such a fresh take on the eighties. So after I watched it, I watched it again, then for Halloween I dressed up as Eleven. I had a lot of fun when we went to Comic Con, they had the full Byers living room, so we got to pose in it.

Then Season 2 came and obviously when this [LEGO project] came up and there were rumours of a Season 3… as I have said, these jaw-dropping moments keep on coming. I don’t know if my heart can take it, it is just so exciting working here.

Do you have a favourite character?

It varies, of course when you watch Season 1 you are like oh Justin is really really cool. Then the Demogorgon, is it cool to like a bad guy? Then when Season 2 came around, I was like, “Steve, he is the man,” but I still have an absolute soft spot for Dustin. That is the beauty of the characters, you can see a little bit of yourself in them. It is great that we have been able to include so many cool characters in the set.

Was designing this set an excuse to re-watch the show?

Absolutely, that is the beauty of it, I got paid to watch Netflix shows. There is so much out there now, there is obviously the full TV show, then Netflix were really amazing to send over behind-the-scenes images. They gave us a whole wealth of reference imagery, the house actually exists in real life – that is the beauty of Google Earth so I could figure out the plans. It has been great to delve in and I am even more excited for Season 3.

What references did you want to include from the off?

Obvious things such as the light up wall and weird things that you might normally not put in LEGO sets. There’s a lot of slime and a lot of goo in the Upside Down so that is represented by the transparent vase and we have never really done a bear trap.

Crystal [Fontan], the Graphic Designer, she has done an amazing job of sticking as many easter eggs in the sticker sheet as possible. I am a big fan of stickers and it was great that we could use an upside down and a right way up in the same way.

What is your favourite thing about 75180 The Upside Down?

Will you be able to justify sitting in the office and watching Season 3 when it launches?

I have actually already taken the day off. I am ready. The popcorn is in the microwave now.