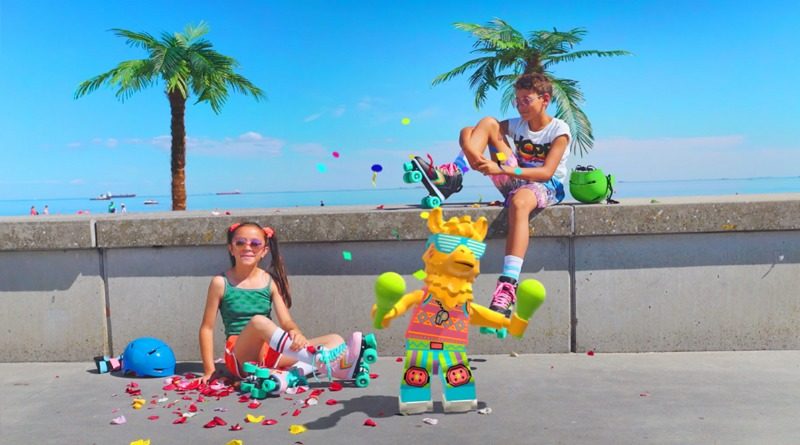 If the recent announcement of LEGO VIDIYO has left you scratching your head, don’t worry: Brick Fanatics is here to help. We’ve got the answers to all your most pressing questions, such as, ‘What is LEGO VIDIYO?’ and ‘Why is LEGO VIDIYO?’

Read on for everything you need to know about this eclectic new experience from the LEGO Group and Universal Music Group.

What is LEGO VIDIYO?

Just like Hidden Side before it, LEGO VIDIYO blends physical and digital play by asking kids to point a smartphone at their toys. In this case, though, you won’t be fighting ghosts: instead, you’ll be creating music videos, using your minifigures, surroundings and a range of digital effects and animations.

How does LEGO VIDIYO work?

Shooting your music videos involves a few steps, but it sounds fairly straightforward. Here’s what you’ll need to do:

What are LEGO BeatBits?

They may sound like a new-fangled gimmick, but LEGO BeatBits are actually just simple 2×2 tiles, each printed with a unique design. Scanning them with your smartphone will unlock access to new digital and audio effects, along with special character animations – all of which can be used in your music videos.

Which songs will be available in the LEGO VIDIYO app?

The LEGO Group has collaborated with Universal Music Group to create LEGO VIDIYO. While that doesn’t mean we’re about to see LEGO minifigures of Lady Gaga or Billie Eilish, it does mean that the LEGO Group theoretically has access to some major artists for the app, which will include songs for you to set your music videos to.

So far, Mabel, Marshmello, Imagine Dragons, Katy Perry and more have been confirmed for the initial roster, with the promise of more contemporary and classic artists at launch and further down the line. Universal Music Group’s catalogue includes huge names like Taylor Swift, The Beatles and ABBA, so we’re expecting big things.

How do you create a LEGO VIDIYO stage?

Essentially: however you like. Whether you want to set your music video in outer space or deep underwater, the only thing stopping you is your imagination – or, more realistically, your ability to render that environment using your own surroundings.

Thankfully, that doesn’t necessarily mean building a huge LEGO studio: you can use cardboard, craft materials, or literally anything else you like to create the backdrop for your video, then scan it in using the app.

How do you use the LEGO VIDIYO minifigures?

LEGO VIDIYO will involve some of the craziest characters ever committed to ABS, and you’ll be able to use the app’s augmented reality function to bring them to life in your music videos at whatever scale you like. That means you can effectively create a life-size minifigure to star alongside you and your real-life, non-plastic pals.

Hit play on the video above to see LEGO VIDIYO in action, from scanning your virtual stage to using LEGO BeatBits to generate digital and audio effects while you shoot your video. You can also get a first glimpse at the music library, which looks to have taken its design cues from Apple Music and Spotify.

How many LEGO VIDIYO sets are there?

There will be at least six LEGO VIDIYO sets, as revealed by Smyths Toys ahead of the LEGO Group’s official unveiling. Each LEGO VIDIYO BeatBox includes a colourful minifigure, 16 printed 2×2 tiles, a plastic ‘pod’ case, and a handful of LEGO elements to decorate it. A new blind-boxed series of minifigure Bandmates is also on the way, offering a cheaper entry point into the world of LEGO VIDIYO.

When will LEGO VIDIYO be available?

LEGO VIDIYO will arrive on shelves on March 1, so we don’t have too long to wait to find out how it works in practice.

We’ll bring you more on LEGO VIDIYO as we build up to its release. In the meantime, you can support the work that Brick Fanatics does by purchasing your LEGO through any one of our affiliate links.