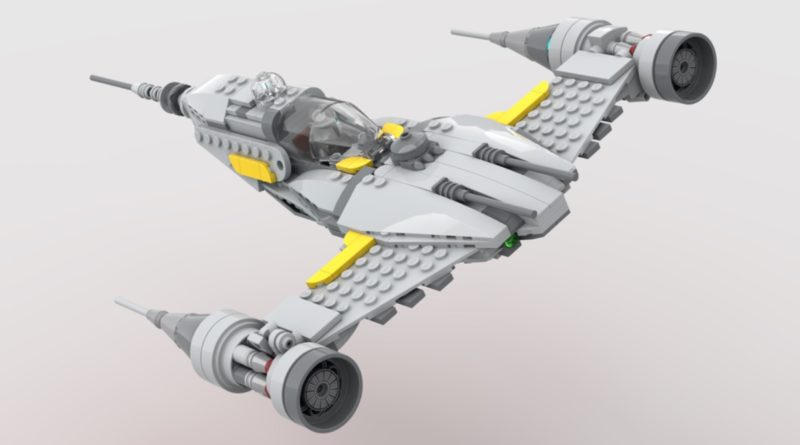 LEGO Star Wars 75325 The Mandalorian’s N-1 Starfighter is rumoured to come in at an eye-watering cost, so here are four potential reasons for its high price tag.

The first LEGO rendition of Din Djarin’s modified Naboo Starfighter, as acquired by the bounty hunter during Star Wars: The Book of Boba Fett, is said to be launching as early as next month. And that’s genuinely exciting news, demonstrating that the LEGO Star Wars team is – for once – ahead of the curve on Disney’s TV shows.

What’s less exciting is the rumoured price point and piece count: according to Promobricks, 75325 The Mandalorian’s N-1 Starfighter will weigh in at €69.99 for just 411 pieces. That’s a price-per-piece ratio that’s off the charts, even for LEGO Star Wars – but based on the details provided so far, we can at least speculate as to why it’s so sky-high…

The LEGO Group has gone all in on its drum-lacquered silver and gold elements over the past couple of years, across sets like 80012 Monkey King Warrior Mech, 76191 Infinity Gauntlet and the upcoming 75328 The Mandalorian Helmet. And given how shiny silver the on-screen version of this particular N-1 is – Mando stripped away most of the yellow – it’s not hard to imagine it also goes heavy on those metallic pieces.

If that is the case, it could just about justify its price tag – at least in combination with at least one other factor on this list.

3 – It includes a bunch of new moulds

Initial details on 75325 The Mandalorian’s N-1 Starfighter suggest the set will include Din Djarin, Grogu, Peli Motto and a BD droid, as seen in The Book of Boba Fett. While we’ve had two of those characters plenty of times before, Peli Motto could require a new hairpiece, and the BD droid is said to make use of a new mould.

Any new moulds would obviously push the price up – at least until their cost can be balanced by use elsewhere (such as in future Jedi: Fallen Order sets…) – and the new droid might not be the only one in the box. Promobricks says the set includes the Darksaber, and we’ve all been longing for a proper mould for that weapon for years…

2 – Europe is losing out again

Also worth bearing in mind is that €69.99 is (of course) only the mooted price of 75325 The Mandalorian’s N-1 Starfighter in Europe. Instagram user 1414falconfan reports that the US price of the LEGO Star Wars set will actually be $59.99, which – while still high – is ever-so-slightly more reasonable.

It wouldn’t be the first time European fans have lost out compared to their stateside counterparts (last year’s 75316 Mandalorian Starfighter retails for €69.99 in Europe, or $59.99 in the US), but even with all that in mind, a predicted cost of £59.99 in the UK and $59.99 in the US still feels high for 411 pieces. So what this really all boils down to is…

You only need to look at how many fans have already built their own version of Mando’s N-1 Starfighter to see how popular any official set is going to be. And if the rumours are true – and it’s coming next month, riding the current wave of popularity, with two brand new characters in the box – we’ve very little doubt 75325 The Mandalorian’s N-1 Starfighter will fly off shelves regardless of its price tag.

That’s something the LEGO Group’s bean counters are surely cognisant of, too, and is probably the real explanation for why this set is expected to be so expensive. But hey, we’ll keep hoping for an accurate Darksaber mould in the meantime…