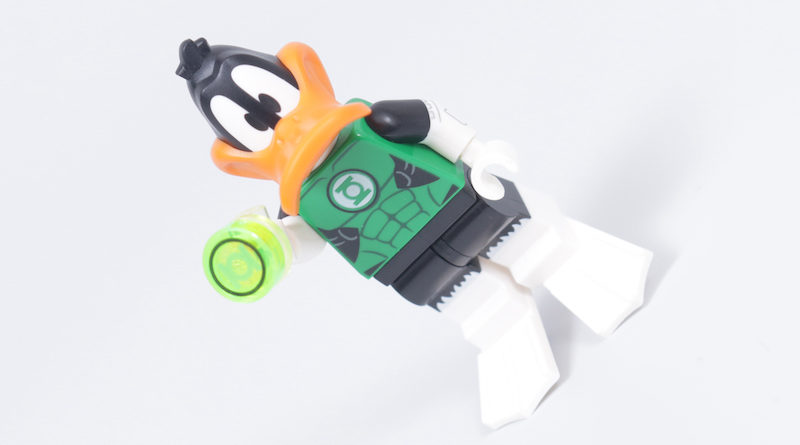 LEGO 71030 Looney Tunes’ Daffy Duck is the perfect starting point for a Green Loontern minifigure, so here’s how to build your very own bird-brained superhero.

Green Loontern originally debuted in a 2003 episode of Duck Dodgers, in which the Looney Tunes character accidentally mixed up his outfit with Hal Jordan’s (or Green Lantern’s) costume and power ring at a dry cleaner. Antics ensued as the Green Loontern was summoned to help defeat the evil Sinestro, which went down with all the gravitas you’d expect of a Saturday morning cartoon.

The character’s stock among the LEGO community actually flourished a full 11 years later, however, when Daffy Duck’s DC alter-ego appeared as a playable character in the video game LEGO Batman 3: Beyond Gotham. Since then, we’ve been itching for an opportunity to put together our own physical version of the Green Loontern.

Happily, 71030 Looney Tunes Collectible Minifigures provides just such an opportunity with the first ever LEGO Daffy Duck minifigure. While he’s technically missing his mask, this is as close as we’re going to get for now – and thankfully, all the other pieces required already exist. Take a look at the images below to learn how to assemble your own Green Loontern.

Taking all those individual elements makes for a minifigure that closely resembles the virtual version seen in LEGO Batman 3: Beyond Gotham, right down to the dual-moulded arms, but also goes one better with dual-moulded legs, courtesy of Collectible Minifigures Series 18’s Cat Costume Girl. Here’s a step-by-step guide to transforming Daffy Duck into his superhero form…

Voila: your very own purist LEGO Green Loontern. If you’re missing any of the particular pieces required to assemble this character, use the BrickLink part numbers in the image further up this page to track them down on the secondary marketplace. You’ll then be able to complete the minifigure by picking up Daffy Duck when 71030 Looney Tunes launches later this month.

Don’t forget to check out our in-depth review of the entirety of 71030 Looney Tunes (minus a certain coyote). And when the time comes, you can use our distribution guide to hopefully pick out a Daffy Duck with ease – as long as you find a fresh box.

One thought on “How to build a LEGO Green Loontern minifigure”