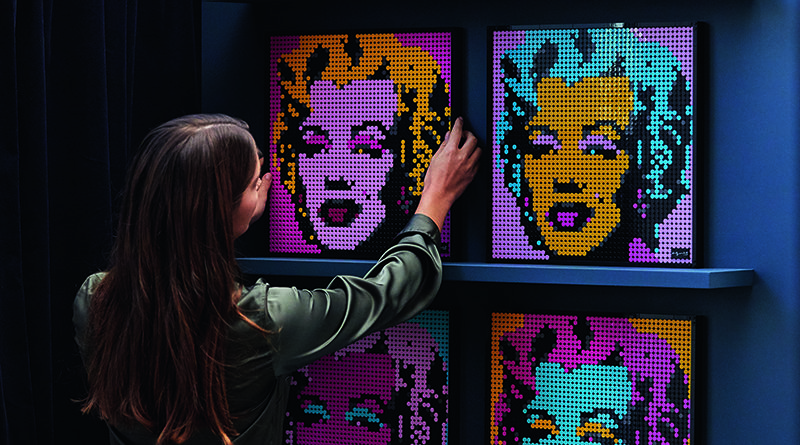 LEGO Art is a new theme from the LEGO Group, that forms part of a strategy to create new products to appeal to adults – some of whom will never have built with LEGO elements before. It will launch on August 1 with four new sets – 31197 Andy Warhol’s Marilyn Monroe, 31198 The Beatles, 31199 Marvel Studios Iron Man and 31200 Star Wars The Sith.

To present the new theme during LEGO Fan Media Days 2020, Design Manager Samuel Johnson and Model Designer Kitt Grace Kossmann get together at the LEGO Group’s headquarters in Billund.

Each set in the theme is a mosaic, with fans following instructions to place single tiles onto plates, which will then be combined to produce a completed picture. To show how to do that, the team needed a new way of presenting instructions.

“We have done something with the building instructions that is different to what we are used to,” Kitt says. “There is a colour bar and that colour bar is represented by all the different bags, so when you build it’s much easier. You can say ‘number seven, that was the light blue one,’ then you can see here as well as just colours there are numbers on it.”

“So it’s kind of like a paint by numbers building instructions, it’s really easy to follow,” Sam adds. “Also [it helps] those who might have issues telling the colours apart. We have really tried to make it as easy as possible.”

The design of the mosaics was done by Kitt herself, rather than simply generated by computer: “None of it has been created as pixel art before so just by sitting with it you also had to take a lot of decisions to make it look right for this scale so it takes quite some time to develop it. It is quite an artistic way of building with LEGO compared to what I have normally been doing.”

“Kitt is the master of this way of building,” enthuses Sam.

Each section of the image is built separately, before they are combined at the end of the build process. To achieve this, a new 16×16 brick with Technic holes all around was developed. It is this element that the tiles are attached to and it is four plates high.

“We wanted to be able to attach the connector on the back, so we have allowed for the space of a brick then imagined we had a plate on top of it,” Sam says, explaining the logic behind it. “Also to give you enough space behind it to have a screw sticking out the wall to give it a bit of air from behind. You can see they are all joined together with Technic pins and then we build the frame around the outside which just holds it together.

“They are really rigid and sturdy and they can hang on the wall. Each one includes two hangers, but you don’t necessarily need to use both to hang the product, but you would have a canvas with two and we want to replicate that feeling you get from hanging a canvas artwork on the wall.”

Sam goes on to discuss the unique presentation for the sets. “It’s a brand new product line so we have exciting, brand new packaging. We have this pizza box like packaging and inside everything is mounted beautifully. You have the building instruction mounted in the top left of the box, all of the tiles that you will need and there’s also a box that contains our brand new elements. Each colour is packaged in a separate bag.”

Within that box there is another new element. “We have a brand new LEGO brick separator and it can remove up to four studs at a time or six tiles at a time… or in winter it is very good at scraping ice off of your windscreen.”

Less functionally, each set contains a unique piece. “There’s actually a decorated element,” the Design Manager declares. “In every box there is a decorated 2×4 tile which is kind of our certificate of authenticity, so you get a printed logo depending on the SKU. Marilyn Monroe has Andy Warhol’s autograph, you have the Beatles logo, the Star Wars logo and the Marvel’s Iron Man logo as well. If you don’t want to have the tag on we actually included enough studs to be able to not include it, you can just have it nice and clean as an artwork if you wish.”

More than just building a set, LEGO Art is intended to be a full experience. “The way you are building this is one plate at a time and you put all nine of them together,” says Kitt. “The reason for that is [because] it is nice to have some ‘me time’ and not do this in a stressful situation. You can do this little by little and listen to your soundtrack, that’s the feel we wanted to create when we did these boxes.”

“Each of these SKUs comes with a soundtrack for building as well, so similar to what Technic have been doing in the past,” Sam elaborates. “We have an audio soundtrack that as you’re building you can hear a cool story about how these artworks are created, depending on the theme of the box.

“We are expecting this kind of product to attract a lot of non-LEGO fans, new consumers to the portfolio, who maybe haven’t found that a LEGO model was something they wanted to have on display in the home, maybe this kind of offering is something for them. That’s why we have tried to go a little bit outside of the box, away from some of the usual LEGO themes, especially with the first two products.”

While four products are being presented today for the launch, there is potential for this theme to go way beyond this introductory selection. “We will actually be continuing to produce this assortment for years and years to come hopefully. This is a brand new platform for LEGO, ongoing, forever – let’s just say forever,” he laughs.