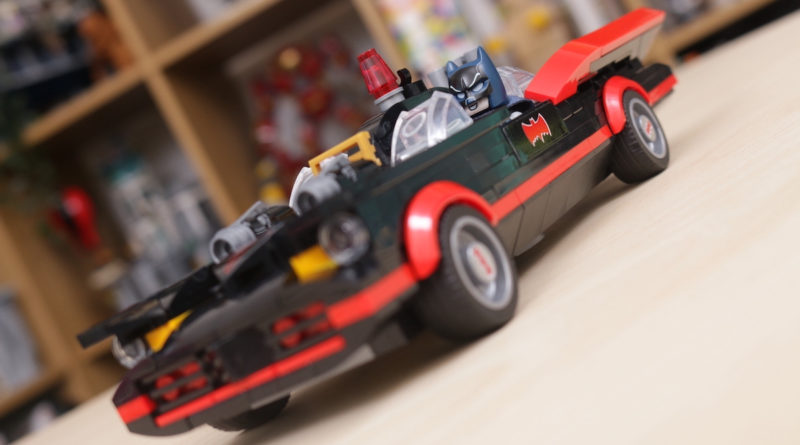 76188 Batman Classic TV Series Batmobile is detailed, intelligent and authentic – and that’s something you can’t say for every LEGO Batman set.

While released to little fanfare, 76188 Batman Classic TV Series Batmobile is another faithful, fun tribute to one of the Caped Crusader’s most iconic versions of his Batmobile.

The 1966 Batmobile was front and centre throughout Adam West’s Batman and Burt Ward’s Robin’s adventures as each week they looked to thwart a villain’s evil (but mostly camp) caper, from racing in and out of their hidden entrance to the Batcave to driving around and parking up at various locations on what is now known as the WB Studios backlot, but was then most definitely Gotham.

The colour and campness of the 1960s Batman TV show is often parodied, but it is always with love and respect for the character, because however bizarre the show got at times, it established Batman as both the mainstream hero he remains today and the rich guy with all those wonderful toys, not least of which is the Batmobile.

Pleasingly, that same reverence for the source material is carried over into 76188 Batman Classic TV Series Batmobile, and it’s very much to the benefit of both the LEGO set and to anyone collecting LEGO Batman.

Built around a Lincoln Futura concept car, the 1966 Batmobile stands out from the Dark Knight’s roster of vehicles even today thanks to its quite unique design, both in shape and colour. The splash of red along the sides of the car also perfectly accents the wings that continue along to the back, while all sorts of subtle angles help shape the one-of-a-kind bodywork.

Putting that into LEGO form isn’t the simplest task, but one that – for a second time now – the LEGO Group has more than ably accomplished. In a build that is comparable to the detail and directional changes of a Speed Champions set, 76188 Batman Classic TV Series Batmobile captures more features than you’d initially expect, and certainly more of the car’s complex shaping than you’d otherwise anticipate.

Particular highlights are at either end of the model in how the front and rear bumpers have been captured in brick form – given how often you see them in the show and how crucial they are to the overall look of the vehicle, they are important areas to get right, and 76188 certainly does, with some smart build techniques too.

We mention that this isn’t the LEGO Group’s first time around with the ’66 Batmobile – the company actually included a minifigure version of the car as part of 2016’s 76052 Batman Classic TV Series – Batcave. The designs are very similar in a surprising number of ways, but while the 2016 version offers more details around the interior and cabin area of the vehicle (reflective of the much higher budget the set it was a part of had), the 2021 version is the smarter, more fine-tuned LEGO build, with sharper and more defined edges across the bodywork.

A lot of what 76188 Batman Classic TV Series Batmobile achieves is thanks to a relatively higher budget for a single-vehicle LEGO set – we mentioned Speed Champions, but £34.99 would get you two cars, not one. The high budget here allows for the number of parts required to achieve the build, and pleasingly not a piece is wasted – and that’s even considering the curiosity of having four pieces left over at the end. It’s not something you see in every LEGO set, but is a nice bit of luxury for anyone looking to remove the stud shooters in favour of a smooth front hood.

The feeling of luxury is also extended to the inclusion of a display stand for the car, to give the model the feeling of a mini-UCS set, much as the LEGO Group did with 2019’s 40433 1989 Batmobile.

These are only little details, but alongside the rather engaging build process, go a long way to treating the particular audience that this is for with the respect that they deserve, and to creating an all-round set worthy of adding to the LEGO Batman collection.

Included are two minifigures in the form of Batman and the Joker. Both designs are incredibly faithful to their appearances in the 1960s Batman show, and both come with dual-printed heads that offer great and true-to-character expressions. Both minifigures are very close in design to their shared appearance in 2016’s 76052 Batman Classic TV Series – Batcave, except for their expressions and some other, very subtle differences, and the fact that Batman is printed on light grey legs and torso now rather than sand blue, and Joker has hands that match the colour of his torso and legs.

A lot of reviews have centred on the absence of Robin, but for the aspect of play, you can see why the LEGO Group opted to include Joker as antithesis to Bats. Likewise, who else but Robin would appear in the 1966 Bat-Copter, should the LEGO Batman theme release such a set in the next year?

Coming in at £34.99 / $29.99 / €34.99 certainly places 76188 Batman Classic TV Series Batmobile in a pricier range of sets than otherwise expected for such a model. It’s very clearly the trade-off needed, though, so as to offer the sort of set older LEGO fans would want – one that favours detail and authenticity over playability. On those fronts, the LEGO Group more than delivers, and stud shooters aside (given you can build those out of the model), this set steers well clear of the juniorised approach other DC and Batman sets in recent waves have been guilty of.

In many ways, it’s a price comparable with LEGO Star Wars sets and it delivers in all the same ways as the best products in that theme manage. It will feel expensive if it doesn’t give you that twinge of nostalgia but – completists aside – why would you be picking this up if it didn’t do that?

It’s also worth mentioning that the only previous time we could get our hands on a LEGO 1966 Batmobile and minifigures of an Adam West Batman and Cesar Romero Joker was in a £240 set. Anything more affordable than that is better value…

76188 Batman Classic TV Series Batmobile isn’t a mainstream LEGO Batman set. It won’t hold as much appeal and interest for younger builders, nor for some Batman fans either, but for anyone with an affinity towards the 1960s Batman show, this set ticks all the right boxes.

It more than pulls at the nostalgia strings, and is very much more than just a gimmick of a LEGO set – it’s an engaging, intelligent model that, thanks to the particular considerations of the design team, treats its target audience with respect.

It takes roughly an hour to put together 76188 Batman Classic TV Series Batmobile across three sets of bags, with some additional pieces left over at the end should you wish to not include the hood-mounted stud shooters.

How many pieces are in LEGO Batman 76188 Batman Classic TV Series Batmobile?

There are 345 pieces in 76188 Batman Classic TV Series Batmobile, and these include redesigns of both Batman and the Joker from the 1960s Batman television series.

The car from 76188 Batman Classic TV Series Batmobile measures 20cm long and 7.5cm wide, and 6.5cm tall. Placed on its display stand, which itself is 6.5cm by 11cm, the model sits just under 8cm tall.