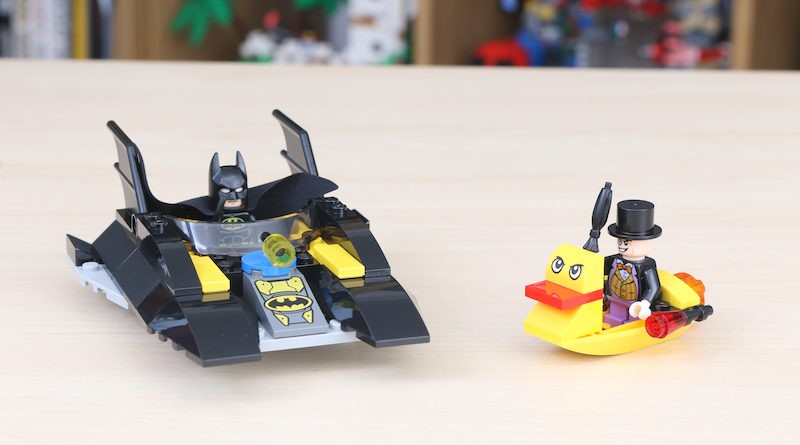 As a 4+ set, 76158 Batboat The Penguin Pursuit! won’t expand your LEGO Batman horizon, but it isn’t really meant to…

Renamed from Juniors to realign back into each respective theme’s main line-up, the 4+ sets have been hit and miss, across the LEGO Group’s roster. These are designed as the first sets younger builders experience after graduating from Duplo, so understandably the building techniques and pieces included are limited in number and complexity. They’re new LEGO sets, but not for you and I.

76158 Batboat The Penguin Pursuit! is no different in that respect, with the two models able to be built in no more than five minutes. That’s not to say they’re completely forgettable, as both are cute, simpler versions of vehicles we have seen before. But as designs and LEGO sets, they don’t move beyond that initial impression.

One thing the LEGO Group has done with 4+ sets to encourage sales is include exclusive minifigures within them, and in this case it’s The Penguin appearing in what is a brighter – albeit really familiar feeling – outfit. Batman is the same minifigure to have appeared in various sets over recent years, except for the new cape design.

Two different capes have been introduced as part of the 2020 range of LEGO Batman sets. The more expensive 76160 Mobile Bat Base – reviewed here – and 76159 Joker’s Trike Chase both include the two designs, whilst 76158 Batboat The Penguin Pursuit! has just the one new one. It represents a much-needed upgrade to an aspect of the Batman minifigure that hasn’t changed since 2006’s introduction, even if in application it suffers in this particular case for wanting to sit up perhaps too far out from his back, whilst also being too long to fall behind him (he can stand on it).

The other design, included in the more expensive sets, is the better, more interesting creation, which makes it a shame to consider which of the pair is included in 76158.

Whilst we have gone hard on 76160 Mobile Bat Base for its simplicity, and would do the same for 76159 Joker’s Trike Chase, at £8.99 and specifically designed for 4+ LEGO builders, there’s little to properly scrutinise 76158 Batboat The Penguin Pursuit! for. It’s for completists and young builders and will likely stay that way.

76158 Batboat The Penguin Pursuit! is available now at at LEGO.com. You can help support Brick Fanatics’ work by using our affiliate links.