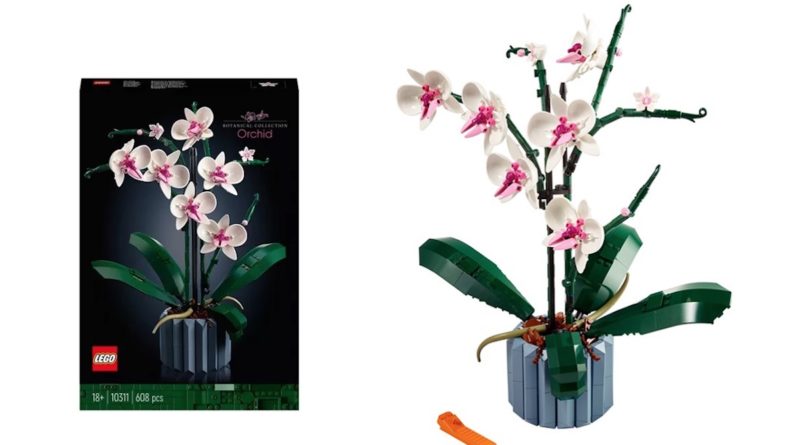 Dutch retailer KelCha.nl has revealed a first full look at 10311 Orchid, the next set in the ever-growing LEGO Botanical Collection.

Yesterday’s tease by the LEGO Group’s social media team suggested additional sets in the LEGO Botanical Collection are on their way as early as next month. The posts revealed a date of May 1, but no other information was forthcoming regarding specific sets.

Now Dutch retailer KelCha.nl has revealed a first full look at one of those sets, with a listing for 10311 Orchid which the site states as being released on April 26. The previously rumoured 608-piece set is part of the theme’s 18+ range and features six detailed white and pink flowers in a vase, flower buds, leaves and climbing roots. The model is approximately 39 cm tall, 30 cm wide and 24 cm deep.

The listing states that the set is ‘inspired by a real orchid and has five leaves and two aerial roots at the bottom.’ Builders can construct the blue ribbed vase and fill it up with brown LEGO parts to simulate pieces of bark that a real orchid would grow in. The set is also reported to include additional pieces for customising the model’s stems, flowers, roots and leaves to create the perfect look.

The retailer is listing the set for €45.50, so we’d expect a UK price of around £45 and $45 in the US, but that’s yet to be confirmed. There’s no official word from the LEGO Group regarding 10311 Orchid, but we’d expect an imminent announcement now that the set has appeared online ahead of its reported April release.