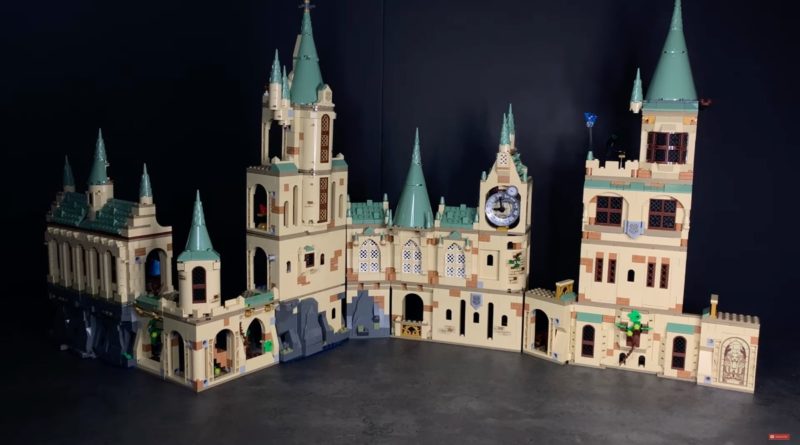 Two new LEGO Harry Potter sets are about to join the latest modular Hogwarts range, so here’s a glimpse at what they all look like when combined.

The LEGO Group rebooted its line-up of wizarding school sets for last year’s 20th anniversary range, taking a more compact, boxier and modular approach to the layout. Rooms can (in most cases) be swapped out between sets for whatever configuration you choose, although there are a couple of exceptions, and some rooms are clearly intended to specifically attach to one another.

The advent of sets including 76386 Hogwarts: Polyjuice Potion Mistake and 76389 Hogwarts Chamber of Secrets in 2021 also saw the end of the previous Hogwarts system, which ran from 2018 through 2020. Any hopes of a return to that format were dashed when 76398 Hogwarts Hospital Wing debuted earlier this year, continuing the new approach and sealing the fate of the older layout.

We’ve already explored how 76398 Hogwarts Hospital Wing fits in with the rest of the sets from last year, but YouTuber SwiftBricks has now followed up by adding in this summer’s two new additions, too. Those are 76401 Hogwarts Courtyard: Sirius’s Rescue and 76402 Hogwarts: Dumbledore’s Office, both of which are scheduled to arrive on June 1 in the UK and Europe, and June 19 in the US.

They also both follow the same structure as the most recent Hogwarts sets, which allows them to slide straight into the increasingly-sprawling layout created by combining every model so far. The LEGO Group provides a suggestion for how the sets might be combined in the back of the instruction manuals for the new products, and it’s that layout SwiftBricks has followed in the video above.

As the YouTuber points out, there’s a jarring discrepancy in the window lattice elements used between models – some are brown, some are gold and others still are white – which makes for a bizarre lack of consistency, but perhaps paints a picture of Hogwarts being added to over time. The other thing to bear in mind with a complete layout like this, however – which even omits one set, 76395 Hogwarts: First Flying Lesson – is just how much room it takes up.

“To be honest, I will not be displaying it like this,” SwiftBricks says. “I just don’t have the room for this. I feel like I’ll probably be displaying it as separate sets for now because the combination just really doesn’t impress me that much.” Of course, the YouTuber only tried one particular configuration of the seven different sets, so your mileage may vary when you come to combine them yourself.

76401 Hogwarts Courtyard: Sirius’s Rescue and 76402 Hogwarts: Dumbledore’s Office will land on shelves next month, while the rest of the current Hogwarts line-up is available to purchase at LEGO.com right now. You can check out our review of the latest instalment, 76398 Hogwarts Hospital Wing, by clicking here.