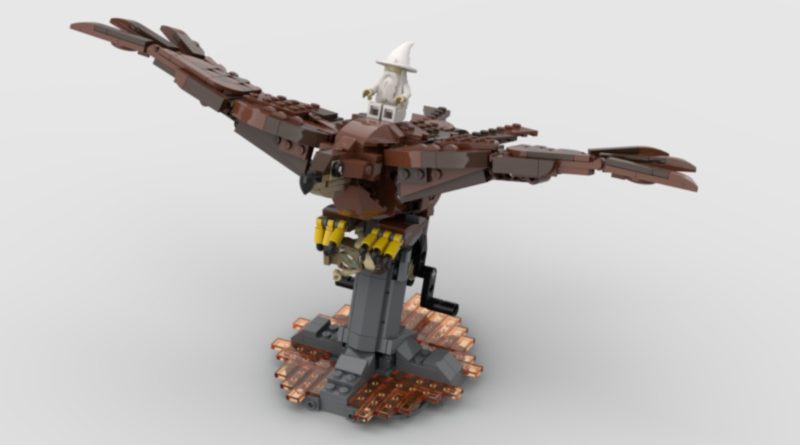 Builders missing being able to collect LEGO Lord of the Rings sets could now transform 76394 Fawkes into one of Gandalf’s Great Eagles.

reddit user Grand_Moff_Toby used brown bricks to turn the red-winged phoenix from Harry Potter into the plot-defying birds from various Lord of the Rings movies. They even repurposed the Dumbledore minifigure from the original set into a version of Gandalf himself, to sit on top of the Great Eagle’s back.

As in 76394 Fawkes, this eagle can move its head and flap its wings to mimic flight. Even the colour of the claws clasping its perch has been changed, turning from Fawkes’ charcoal grey to a bright yellow.

The stand on which the Eagle sits has also been adapted, with a more earthy-looking base to replace the gold-plated model in 76394 Fawkes. Instead of a lofty perch in Dumbledore’s office, the Great Eagles of Lord of the Rings are more likely to be found in trees and rough mountaintops.

The LEGO Group itself has already changed the colours of 10271 Fiat 500 and 31058 Mighty Dinosaurs for re-releases. Perhaps Grand_Moff_Toby took inspiration from the official adaptations. Despite not being the first time LEGO sets have been recoloured and given new leases of life, it’s certainly effective in this instance.