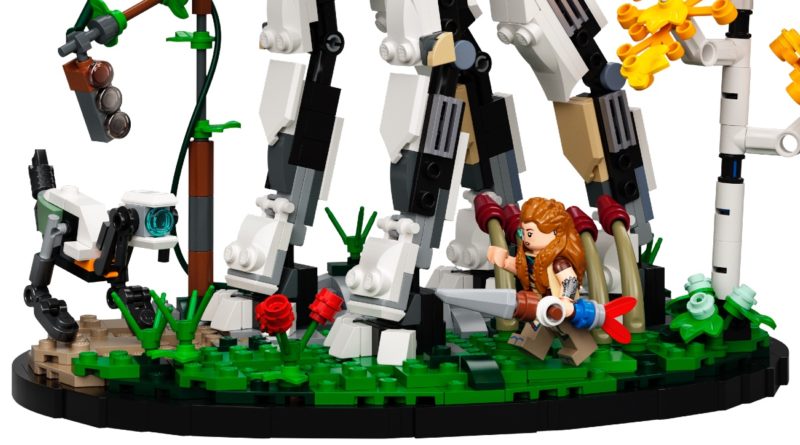 The LEGO Group has officially unveiled 76989 Horizon Forbidden West: Tallneck, its first set based on the Horizon series – and its first set in partnership with PlayStation.

The 1,222-piece set – which was first listed online back in December 2021 – recreates one of the video game series’ most iconic machines, found roaming the 31st-century United States in Horizon’s post-apocalyptic world. Guerrilla Games’ Horizon Zero Dawn arrived in 2017, while its first sequel Horizon Forbidden West launches on Friday, February 18.

Falling under the LEGO for Adults umbrella with an 18+ label on the all-black box, 76989 Horizon Forbidden West: Tallneck includes the eponymous machine, along with a Watcher and an Aloy minifigure, who’s sporting a brand new hairpiece. In-game, Aloy scales Tallnecks to uncover new sections of the world map, while she uses her spear and bow (both included here) to take down machines like Watchers.

It’s all set on a black display base – much like the recently-revealed 76956 T. rex Breakout – that evokes the trappings of Horizon’s world, depicting an overgrown landscape with tall grass, a birch tree and even a rusty traffic light. The Watcher also includes trans-blue, yellow and red tiles to simulate its various states of alertness (docile, wary or attacking).

“Getting to team up with Guerrilla was truly remarkable,” said LEGO designer (and ex-Brick Fanatics Magazine contributor!) Isaac Snyder. “The Guerrilla team is incredibly passionate about the world of Horizon Forbidden West and were a huge help in ensuring we were able to create an authentic representation in LEGO form.

“Thanks to our close collaboration we were able to include references to all the most iconic aspects of Horizon Forbidden West, from incredible machines, mysterious ruins, unique tribes, and stunning scenery.

“There is a huge amount of mutual respect between the design teams and everyone involved was beyond excited to see this model come to life! Our hope is that everyone building this model has as much fun as we did designing it.”