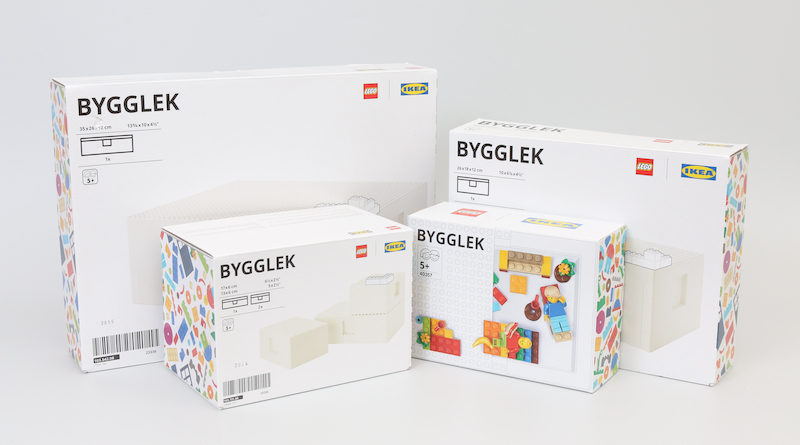 The result of a unique collaboration, the LEGO IKEA BYGGLEK range brings a novel, creative storage solution to LEGO collectors.

When the LEGO Group and IKEA announced back in mid-2019 that they would be collaborating together on a new range named BYGGLEK, all sorts of ideas sprang to mind. Encouraged by one of the vaguest press releases that either company has put their name to in modern times, the possibilities of what could come from these Scandinavian giants creating something together seemed limitless.

Fast forward little over a year and the end result emerged as a set of storage boxes with LEGO baseplate-style lids, and a package of select LEGO pieces. As a product range that was hoped could highlight the best of LEGO and the best of IKEA, this perhaps wasn’t what many of us had truly dreamt of. And, in hindsight, a glance at phrases like ‘…couldn’t pause and play be a way to enable quick play?’ from the duo’s press release seem even more remarkable for the fact they were really just talking about boxes.

Putting what initial disappointment there may be to one side, though, and BYGGLEK has proven popular since appearing in IKEA stores, at least with AFOLs on social media, who have been rushing out to pick up the entire range so as to push the boundaries of the LEGO compatibility towards some highly creative ends.

And even though they are just boxes, there’s something enticing about them. Clean and white plastic with that LEGO compatible aspect suggests creative potential. They may be boxes, but they also feel like blank brick canvasses.

BYGGLEK isn’t the only official LEGO storage solution – click here for a review of a selection of Room Copenhagen’s brick-based storage drawers.

Perhaps the most divisive of the four products within the BYGGLEK range is the simplest – the box of 201 LEGO pieces. On the one hand, when working with the LEGO Group, what else could you ask for or expect, other than LEGO? On the other hand, putting LEGO inside a box and calling it a collaboration with IKEA is a little far-fetched.

The selection of pieces is clever, however, in two ways. There are hints at and tributes to IKEA’s wider product range within the selection of pieces (is a LEGO hot dog more expensive than an IKEA hot dog?), just as those pieces offer a nice entry point into what ideas and build possibilities are possible when combining the LEGO with the LEGO-compatible boxes within the BYGGLEK range.

Likewise, having two minifigures included adds extra play value and attraction to the unnumbered LEGO set. If there’s a set many a child dragged around IKEA on a Sunday afternoon will gravitate towards, it’s this one.

Included in the box is a fold out two-sided poster of sorts, with suggested builds on the one side and a nicely designed advert of the BYGGLEK range on the other, but somewhat interestingly no specific instructions beyond that.

For £15, you get good value, even if it hardly feels on face value like the result of any exciting collaboration between the LEGO Group and IKEA.

It’s in the boxes that the collaboration can be more keenly felt.

Unlike the two larger BYGGLEK LEGO box with lid products, the three-pack of smaller boxes comes with the trio all already constructed, neatly packaged within the small cardboard box. It’s a good indication of just how small the three boxes are, but it is worth acknowledging that in measuring how much LEGO is possible to fit in them that almost all 201 pieces from the BYGGLEK LEGO set could fit within the larger of this set of boxes.

Given the petite nature of these boxes, they feel more like the entry point for anyone curious about the BYGGLEK range, or, perhaps more interested in the build possibilities that they can unlock, given the LEGO-stud-to-box-size ratio is perhaps at its best here. At these sizes you’re picking up something that’s more toy and novelty, than storage solution too.

The next size up in the product range represents a notable move up in size, and with that, the chance to do some flat-pack construction. This size and the next size up come split into six pieces – the four walls, base and lid, and are very straightforward to slot together, with a satisfying click to secure the base to the interlocked walls.

Interestingly, the lids to the boxes at all sizes are loose. They sit very exact in position on top, but are not connected or held in any way, meaning possible disaster is just a knocked BYGGLEK box of LEGO away.  They still keep possible dust and dirt from getting into the box, and perhaps help to encourage the lid’s secondary use as a baseplate. And they are great for that, for the two-brick thickness of the lid/base, and for the dimensions that haven’t been seen before in LEGO baseplate form.

Moving up to this size of box brings with it more suitable storage options, and the boxes do prove to be somewhat larger on the inside than you may otherwise expect.

The largest box in the range is significantly so, coming in at twice the size of the £12 BYGGLEK LEGO box with lid, and is clearly the best value option if storage is the biggest priority for those considering the range.

You can get a hefty amount of LEGO inside one of these boxes, with its total storage surpassing Room Copenhagen’s 4.7-litre 2×2 brick storage drawers (and so likely equal to the 5.7-litre 2×2 brick storage boxes), and comparing closely with the 11-litre SAMLA storage boxes from IKEA. Those clear plastic boxes measure 39x28x14cm and can carry a little extra volume, and, priced at £3 each offer some practical, painful context. Particularly so given that whilst they are quite breakable under certain strain, they feel made of a thicker and sturdier plastic than the BYGGLEK boxes.

All three of the BYGGLEK LEGO box with lid products are identical in quality of structure and material. The plastic that they are made of is incredibly light, which does have certain benefits, including safety. However, it seems lighter for how the plastic certainly does feel both thinner and of lower quality than the plastic used that LEGO bricks are made from. It makes for a finished product that comes across as more brittle than you’d otherwise hope, and – without being able to put this to the test yet – the perception is that it is perhaps more vulnerable in the long run to cracking, marking and scratching.

The boxes can interlock on top of each other, using the studs on the baseplate-style lids as guides, but, they do not firmly connect as LEGO would in the same way. The connection is secure enough, however, that a knock wouldn’t necessarily dislodge them. The stackable nature of the boxes adds further fun and possibilities to any wider LEGO-related building too.

And that’s the main draw to the boxes, that they are LEGO compatible, in a few different ways, most notably with the baseplate-style lids that measure two bricks tall. Each of the walls of the two larger boxes and the two sides to each of the two smaller boxes also have inverted frames with single rows of studs along them.

Each box also measures a certain number of bricks tall, which although a small detail, helps to turn what is otherwise just a storage box with studs on it into something that is truly compatible in size and scale too. Measuring a set number of bricks tall pulls these IKEA boxes well and truly into the LEGO world of building – build around the boxes, alongside the boxes, in and out of the boxes, and they will always fit within a LEGO creation. And this is perhaps the best part of the boxes’ design, for how simple an idea this compatibility is, and for how effectively it opens up far greater play potential than just any-sized box with a LEGO stud-compatible lid would do. It’s the surest sign of IKEA and the LEGO Group working together in an intuitive way.

The fact that the boxes only come in white – at least for now – is at once both a positive and a negative. Other storage solutions both official and not are available in a number of different colours, and would certainly be popular within this range too. But, as a starting point, white serves perfectly as that blank canvass, to tempt the inner builder and their colourful collection of bricks to create something.

It’s worth mentioning that this LEGO compatibility looks to have come at a slight expense of any compatibility in the other the opposite direction, with IKEA products. The BYGGLEK boxes work so well with LEGO bricks, but don’t sit as plush or comfortably as they could otherwise have sat within a KALLAX storage unit, for instance. It’s a small point of contention more reflective of our big LEGO-IKEA dreams of a year ago than of anything really contentious. The collaboration has clearly prioritised working within the LEGO system, and it achieves this masterfully.

The LEGO IKEA BYGGLEK range comes in all-caps, shouting for attention within the LEGO storage market. It is a novelty, a toy and a semi-useful collection of storage boxes all rolled into one, with enough to both differentiate it from the competition and certainly pull in the interest of more than a few LEGO fans.

It’s by no means the only LEGO storage solution, for the quality or plainness of its finish the most premium, nor even the best value for practical storage purposes, but, for how it offers something so different in an attempt to work play into the equation, it’s one of the more notable of recent years.

Purchasing your LEGO by clicking through to LEGO.com from any one of Brick Fanatics’ affiliate links ensures that we get a percentage of your spend, which goes directly towards funding all of the work that you see on this website.