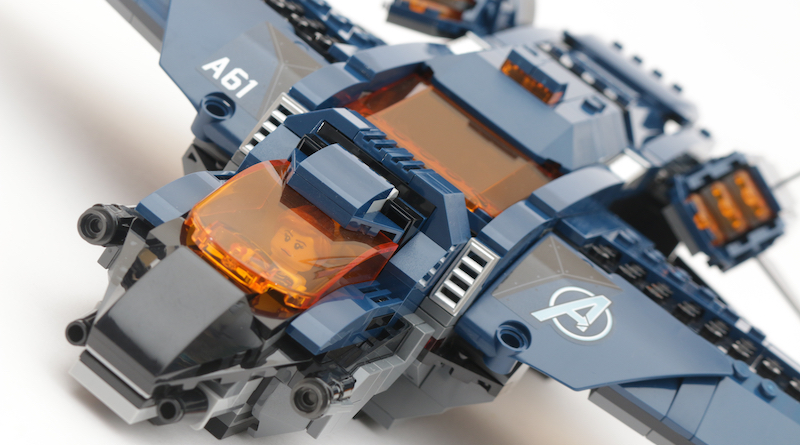 76126 Avengers Ultimate Quinjet takes what we’ve come to expect from a LEGO Quinjet and adds so much more than the price for this set should allow. There’s more detail, a higher quality finish and look all round, plus enough interior space to fit all the Avengers (depending on if any of them survive Endgame).

It is plain to see that a great deal of attention and care has gone into both the practical and aesthetic design points of 76126, and certainly more than has gone into any of its predecessors, and arguably that has gone into a lot of LEGO Marvel sets released up to this point. 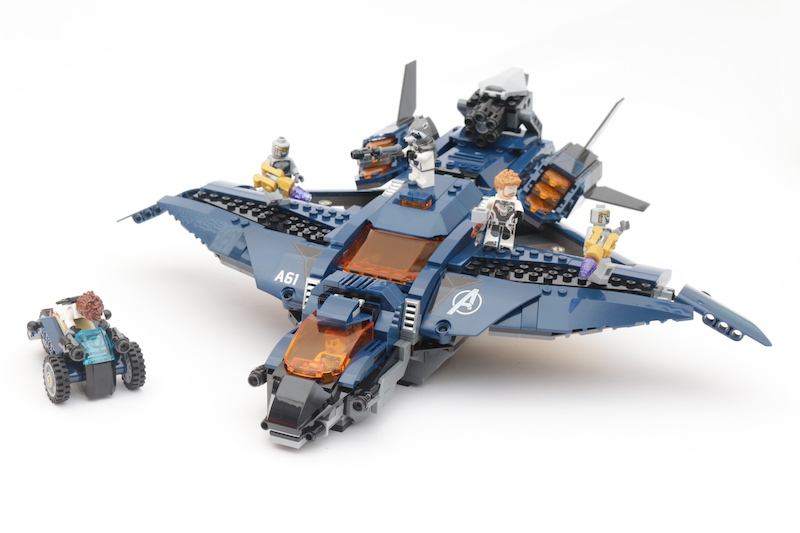 For such praise, it’s unusual to begin the review with a comment that the build experience for 76126 Avengers Ultimate Quinjet is reminiscent of much older LEGO sets, and in a negative way. The first half of the hour or so that it’ll take to put this together may take you back to that time before the advent of numbered bags, and before the more immersive twists and turns that most modern LEGO builds offer along the way. Simply put, construction of the underside of the Quinjet feels simplistic and dull, most comparable today to building a younger age range CITY set.

However, stick with it, because as soon as you start work on the cockpit, wings and outer body, the Quinjet not only takes shape, but advances in technique, colour and parts usage in such a way so as to create a wonderfully contoured – and weighty – final flying machine.

This is the largest piece count dedicated to a Quinjet, coming in at the same price as 2016’s 76051 Super Hero Airport Battle that had the last such edition of the ship included. The 2019 version is far more substantial in many ways, benefitting from almost the entire piece count being dedicated to its structure to create a slightly wider wingspan, longer and thicker main body and, overall, the more advanced design that you would hope that three extra years of LEGO design expertise would bring. 76126 Avengers Ultimate Quinjet is also bigger than 2015’s Quinjet from 76032 The Avengers Quinjet City Chase, and the closest yet to 2012’s mammoth 6869 Quinjet Aerial Battle.

The wing design is most interesting in considering the 2019 Quinjet, for how it updates and refreshes the plate-based approach that has served all three of its predecessors. That is thanks to a more complex frame, which allows for the same solid connection between body and wings as previous Quinjets, but a far more dynamic overall design, with significantly smoother contouring at the front, and additional sections to the back of each wing that frame a large rotor. The Quinjet’s entire form is expertly captured and most clearly defined in the design of these wings. It’s an elegant form that is given further weight thanks to the large back engines that also serve as a good example of the extra attention to detail that has gone into this build – they aren’t just connected to the side of the main body at the back, but, done so in a way that is ever so slightly angled. It is only a subtle difference, but one that helps elevate the quality and style of the finished model.

Refreshingly, with all previous Quinjets in mind, the exterior’s detailing and the overall sturdiness of the entire build have not been achieved at the expense of the interior. Indeed, thanks to some hinged elements and a clever SNOT (Studs Not On Top) approach, this is the largest, most spacious and most detailed interior to a LEGO Quinjet, with open space through the entire body. Behind the cockpit is seating and standing room for a good number of minifigures, with screens and weapon-holding clips, whilst the back end houses the oddly-sized trike (which looks like Brum, no?) with ease and sturdiness. Everything included in the set can fit inside the Quinjet and comfortably so.

With reference to the interior and to the warm feeling that it offers in stark contrast to the cold blue of the exterior, the colour palette and how it has been used is worth mentioning. It’s a build that achieves the adverse visual styles of the inside and out thanks to a skillful change from the grey underside to the dark blue, with black detailing and just a handful of stickers that make up most of the top part. You won’t notice it when building it, but, when studying the finished set, it’ll be the first thing drawing your eye, whether its in scanning the wings, or its hinging the canopy open for a look inside.

76126 Avengers Ultimate Quinjet is a complete build not just for its design, but for its practicality as the Avengers’ main mode of transport. You want to be able to fit a good number of the characters’ minifigures into it, and to be able to fly it around without fear of anything small pinging off. And you want it to be big, as it appears in the films. This is the first LEGO Quinjet to offer all of that without compromise.

That there are plenty more interesting minifigures elsewhere in the LEGO Marvel Avengers range is little bother. It is not an understatement to say that, for many other more important reasons, 76126 Avengers Ultimate Quinjet raises the LEGO Marvel experience to a new level, and if we’re about to enter a golden age of LEGO Marvel design, then sets like this and 76125 Iron Man Hall of Armor (review) are the ones heralding it.

You can support the work that Brick Fanatics does by purchasing your LEGO through any of the affiliate links posted on our site, such as in this article.