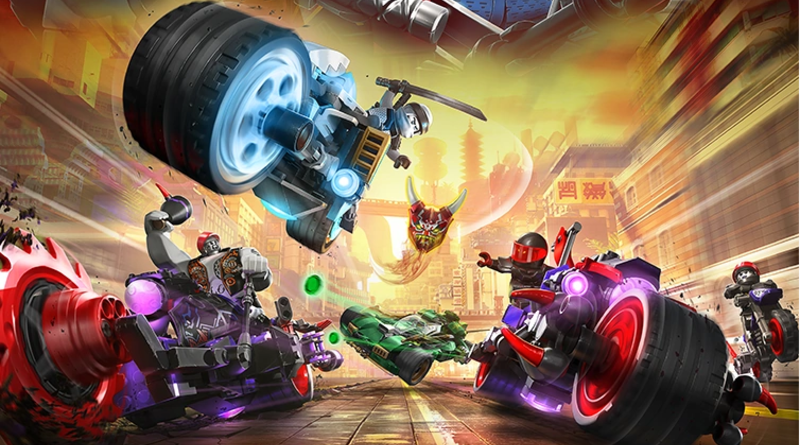 With LEGO NINJAGO celebrating a tenth anniversary, it seems only right to look back and explore the past ten years of the theme, with 2018 featuring two story-heavy seasons split between realms.

2018 was no doubt one of the most difficult for the NINJAGO design team with the writers needing convince fans of a new set of designs for the main characters, as well as a new voice actor for Lloyd. Jillian Michaels who had voiced Lloyd since the start of the show had left the role, bringing Sam Vincent as the new talent. As expected, this change was divisive across the community but nonetheless, the show had to go on. Some concept art shows how the new designs affected some of the characters while others maintained their original appearance, such as Misako.

Season 8 would see the ninja recovering from their loss of their Mentor Sensei Wu who was still lost in time. The team was hired to protect the royal family of NINJAGO, including Princess Harumi, who a certain green ninja would soon become to care for. Meanwhile, a dangerous biker gang formed in the shadows and worked towards hunting down a set of ancient masks belonging to a destructive civilisation known as the Oni. One of these masks belonged to the royal family, which went about as well as can be expected for the ninja team.

The mask was taken in an attack on the palace and the royal family was lost, all apart from Princess Harumi who Lloyd had fiercely protected. The team continued to race the bikers, known as the Sons of Garmadon to the remaining two masks, hearing word that they intended to resurrect Garmadon, in his evil form. This plot point proved troubling for Lloyd, hopefully, there wouldn’t be much more for him to worry about. On the hunt for the final mask, Harumi reveals herself as the leader of the gang betrays Lloyd, taking the mask and him too.

Speaking of the masks, a brand new element was made for them, and some concept art provided by the LEGO Group reveals the thought process behind designing them, including marking which areas can be printed on and how it can be attached to a minifigure.

While Lloyd was alone with Harumi, the rest of the ninjas would find a very young Sensei Wu who had finally emerged from the timestream. Unfortunately, no wisdom would be shared with the team as Wu had been aged backwards into an infant. With Wu being no help, the rest of the ninja attempted to stop the ritual to resurrect Garmadon and seemed to succeed saving their friends and stopping the bad guys. Another win for the team it seemed. However, that wouldn’t be the case with Garmadon resurrecting and using his power to defeat the ninja, forcing the original team of four to retreat into another realm, while Lloyd and Nya were stuck in a Garmadon-controlled NINJAGO.

Up to this point, arguably one of the most underused aspects of NINJAGO was the 16 realms, as well as the story of the First Spinjitzu Master, creator of all NINJAGO. Thankfully, the next season would explore them both. Kai, Cole, Jay and Zane were forced to retreat into the first realm, accompanied by a Baby Wu. Here they found themselves stranded and constantly wary of wild dragons, what they weren’t aware of was the Dragon Hunter clan that found themselves very interested in the team’s elemental powers and ended up capturing them.

Meanwhile, in the realm of NINJAGO, Lloyd and Nya were also hunted down by the Sons of Garmadon, with Lloyd having lost his powers. Dareth and Skylor assisted them, along with the return of the rest of the elemental masters, minus one member who had turned bad. The return of these characters proved to fans that the writers had not and would not be forgetful of the earlier seasons that brought the show to where it was. Here they would meet with Mystake, who turned out to be an Oni who had joined forces with the First Spinjitzu master long ago. The history of NINJAGO was fully explained this year, greatly adding to the lore of this LEGO theme.

Back in the first realm, the ninja had discovered that Wu was ageing fast and would hopefully be back to his wise age soon enough. Also, as the son of the First Spinjitzu Master, who themselves was the child of the Oni and Dragons. Perhaps that’s how a LEGO minifigure is made. The four ninjas would continue to survive, constantly chased by the Dragon Hunters, and teaming up with one who believed that their clan’s way of living was wrong. Eventually, with the help of the mother of all dragons, Firstbourne, they escaped back to NINJAGO and defeated Lord Garmadon, who became powerless and trapped in Kryptarium prison. Firstbourne even received her own LEGO set, 70653 Firstbourne, featuring possibly one of the most impressive NINJAGO dragon models to date.

So, the battle had been won once again, with this story lasting for the entire year rather than wrapping up in the first half. One question lingered on the mind of fans however, the ninjas saw plenty of dragons in the first realm, but where were the Oni? That question would soon be answered in the next chapter of LEGO NINJAGO.