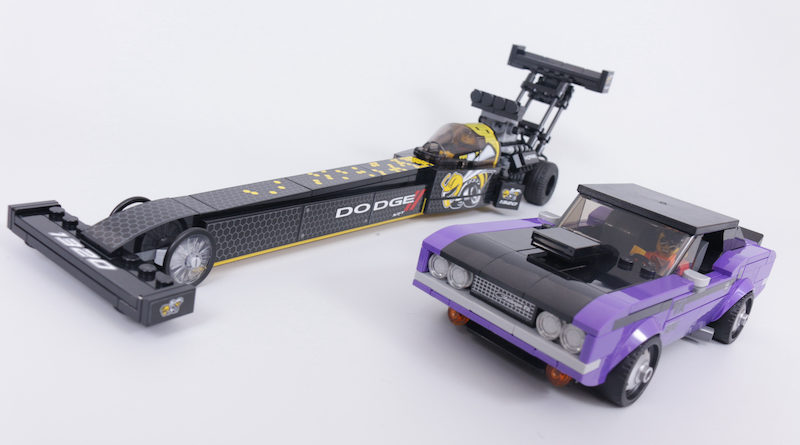 Two of the mid-2021 wave of Speed Champions sets are challenging for the longest (and somewhat most ridiculous) set name in the theme’s history – a history that includes many a double-car designation with all sorts of levels of punctuation designed to test your understanding of written communication.

For one thing, both vehicles included offer firsts for the LEGO Speed Champions line. Believe it or not, 76904 Mopar Dodge//SRT Top Fuel Dragster and 1970 Dodge Challenger T/A includes the first ever purple vehicle in the theme’s six-year history, in the 1970 Dodge Challenger T/A, and if any vehicle in Speed Champions deserves that particular honour, it would be this one.

While a vehicle released in any number of colours from its 1969 debut through its production end to 1974, part of the Dodge Challenger’s cult-like status comes from the number that were specifically produced in that dark metallic colour specifically named Plum Crazy Purple.

The Challenger was Dodge’s late entry into the pony car market that was kicked off in the mid-1960s by the Ford Mustang and intensified through the 1970s, before dying away until a resurgence in more recent years. Designed to be smaller, more affordable and compact, stylised coupes or convertibles, there is continued debate over whether the Challenger’s V8 engine pushes it entirely into the more specific muscle car sub-category that spun out of the ‘Pony Car Wars’ of the 1970s, when manufacturers developed these vehicles in league with factory-supported racing.

Indeed, beyond the colour, part of the reason why pony and muscle cars are so revered even to this day comes from their competition in the road, street and even airport-based racing of the Trans-Am Series. And its participation in that (and rules stating that manufacturers release a production edition of participating cars) created – among other Dodge entries over the years – the 1970-specific Dodge Challenger T/A (Trans-Am) that we have built in LEGO form here.

Flat-black side stripes, a ‘six pack’ hood scoop, front and rear spoilers, ‘megaphone’ exhaust tips, chrome hubcaps and a smaller ‘refined’ rear window are all specific to the 1970 T/A model. While the LEGO version is boxier in places than you’d ideally hope for, it crucially includes all of these things, albeit in the case of things like the megaphone exhaust tips, with more creative licence than the creative building that Speed Champions can otherwise offer.

There are some unexpected and almost unnecessary uses of the LEGO building system at play in this model that demonstrate a higher understanding of the mathematical compatibility between pieces. But when it all comes together to build a quite boxy car, there is still a reliance on stickers and colour scheme to help sell the overall effect desired.

While you can understand why it isn’t the case, it’s still somewhat unfortunate that the two classic muscle cars weren’t paired in the one LEGO set, really. Instead, the 1970 Dodge Challenger T/A comes alongside a Mopar Dodge//SRT Top Fuel Dragster. Mopar is the team name, whilst Top Fuel is the category of drag racing that produces the quickest accelerating cars in the world, reaching speeds of 335mph. It is called Top Fuel for how the vehicles – particular in the sport’s early days – used the most dangerous and volatile fuel to power the engines to reach the fastest speeds most quickly.

Drag racers are truly unique in design, most obviously in their long, thin frames that come to a point at the front, with tiny wheels heavily juxtaposed against huge engines and wheels right behind the single-driver cockpit, complete with oversized rear wing. Dragsters also mix – particularly in Top Fuel – heavily-restricted, decades-old technology in areas such as engine configuration, with advanced technological design in other aspects, including car materials and design.

Competing at such high speeds over safety-led short distances of 1,000ft/305m, there is nothing shaped quite like a drag racer, and just as 76904 Mopar Dodge//SRT Top Fuel Dragster and 1970 Dodge Challenger T/A gifts Speed Champions fans with a first car in purple, it also provides us with a first drag racer too.

Everything immediately identifiable to a dragster is clearly captured in this LEGO model, just as there are many details more specific to the structure of the Top Fuel dragster this is based on. Combine that with the branding of Team Mopar and there’s an air of authenticity to this LEGO version, even if you are unfamiliar with the finer points of a dragster. In many ways, the model had no right to be that specifically designed and almost doesn’t need to be. But if you do find yourself studying the make-up of a dragster’s engine, you’ll have a deeper appreciation for just how wonderfully this LEGO car recreates it in bricks.

Whilst the switch to eight-stud-wide design brings with it a lot of plus points and many an opportunity to explore detail and authenticity in vehicles like never before in LEGO form – and both cars in this set benefit as such – there are slight issues in the scaling of both the Challenger and dragster. It’s a compromise to allow for proportionality and design to breathe and can be felt through a number of Speed Champions cars to one degree or another. It’s fairly noticeable here, with the muscle car’s design feeling slightly too long and too tall for the included minifigure, and with the dragster noticeably appearing too tall and too long.

It’s a minor criticism, but one worth noting particularly in the case of the dragster – you may not otherwise be expecting such a long vehicle. It’s slightly longer than the most recent X-wing…

A minifigure for each vehicle is included, with the drag racer benefiting from the more complete set-specific design in racing overalls. That being said, the orange jacket torso for the Challenger driver is just as exclusive and is the real Easter egg included within the set, based on the Dodge Scat Pack Club’s original jacket design from the era, complete with black stripe and Dodge logo.

It’s that more refined taste required around dragsters that will set 76904 Mopar Dodge//SRT Top Fuel Dragster and 1970 Dodge Challenger T/A apart. Pairing a dragster and a muscle car together stylistically makes for an unusual combination, but one borne from sticking to single manufacturers in boxes.

It’s the same situation for a number of Speed Champions double-packs, such as with 76903 Chevrolet Corvette C8.R Race Car and 1968 Chevrolet Corvette, where you have a modern race car and a 50-year-old muscle car. It is ultimately why, releasing in summer 2021, there are two great muscle cars from the same era in car history that aren’t otherwise sitting side by side in one great LEGO set.

In the case of 76904 Mopar Dodge//SRT Top Fuel Dragster and 1970 Dodge Challenger T/A, clearly the Challenger will pull in more of the immediate interest, for its status in the car world and for its more identifiable design points that make it the car it is and help define the LEGO version. The dragster is an interesting build too, primarily for being the first of its kind in the LEGO Speed Champions line-up (because fewer of us will have as much familiarity with dragsters to really appreciate the depth of detail in the model), and ultimately plays as much a part in 76904 offering a pair of interesting, genuine firsts to the theme.

As a complete set, though, it’s whether you want total variety between the two cars, or a greater sense of collectability and continuity, as to whether or not 76904 Mopar Dodge//SRT Top Fuel Dragster and 1970 Dodge Challenger T/A sits above the likes of 76905 Ford GT Heritage Edition and Bronco R for you.

Support the work that Brick Fanatics does by purchasing your LEGO Speed Champions sets through one of our affiliate links.

How long does it take to build 76904 Mopar Dodge//SRT Top Fuel Dragster and 1970 Dodge Challenger T/A?

It takes about as long as it does to read out loud ‘76904 Mopar Dodge//SRT Top Fuel Dragster and 1970 Dodge Challenger T/A’ as it does to build the set – roughly 60 minutes, split evenly between the two cars. These are more particular builds than the final models otherwise suggest.

How many pieces are in 76904 Mopar Dodge//SRT Top Fuel Dragster and 1970 Dodge Challenger T/A?

How much does 76904 Mopar Dodge//SRT Top Fuel Dragster and 1970 Dodge Challenger T/A cost?