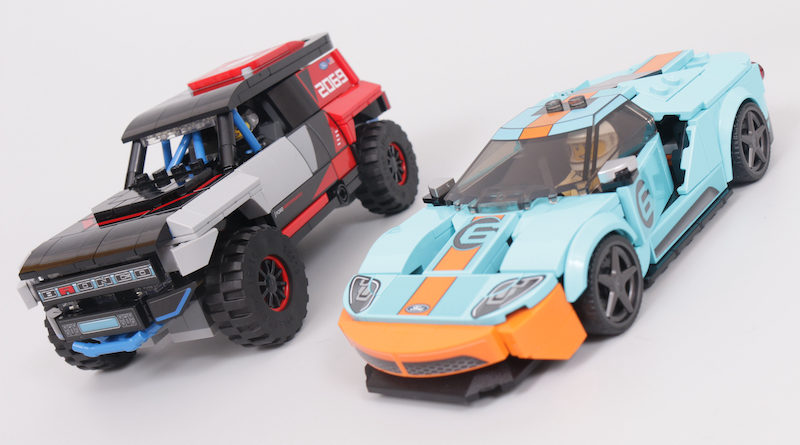 Another contender for one of the longer set names in LEGO Speed Champions history, 76905 Ford GT Heritage Edition and Bronco R could also be one of the best.

Coming in at 660 pieces and priced at £44.99 / $49.99 / €49.99, 76905 Ford GT Heritage Edition and Bronco R leads the latest Speed Champions wave of releases with style and substance, as the the largest and joint most expensive. It may take a while to say the full name, but you’ll need even longer to fully appreciate the intricate detail in design that has been packed into each of the two vehicles.

Specifically, 76905 Ford GT Heritage Edition and Bronco R constructs two of Ford’s most recent, eye-catching vehicles: the GT Heritage Edition announced last year that is being produced for 2021 and 2022 to mark the 55-year anniversary of Ford’s famous 1966 24 Hours of Le Mans race; and the Bronco R, the motor company’s entry into the gruelling Baja 1000 endurance race in 2020.

One vehicle very much takes inspiration from Ford’s past, whilst the other clearly represents the company’s intended direction for the future, and as a pairing to lead the latest wave of LEGO Speed Champions releases, they sit proudly as some of the theme’s best work to date.

The GT Heritage Edition evokes plenty of nostalgia in its real-world design, taking bodywork and design cues where possible from its source of inspiration, the 1966 Ford GT. In comparison to the car from 55 years ago, the modern version – which is limited to a production run of 50 (of which all have been assigned future owners already) – also smooths out particular areas of the chassis and framework, whilst accentuating others so as to maximise the performance of the now 3.5-litre EcoBoost twin-turbo V6 engine.

It means that where the bright blue and orange colour scheme of the LEGO car you build (based on the iconic Gulf livery) may evoke that iconography of the GT of the past, the version built will have subtle differences a less suspecting LEGO fan may not initially expect to find, measured against expectations for building a ‘LEGO Ford GT’.

For instance, the curvature of the bodywork over the front wheels is less pronounced in the GT Heritage Edition compared with the 1966 GT, whilst the buttress air ducts are a new feature that create almost completely different door designs. That focus on airflow continues through to the rear to reshape the vehicle further from the 1966 design, which was known for its flat slope down to the tipped edge.

These differences are all captured in the LEGO GT you build as part of 76905 Ford GT Heritage Edition and Bronco R, and remarkably so. Yes, the front lights are printed tiles rather than anything built, but the rest of the bodywork – from the front underside through to the pointier angles along the doors and towards the rear – perfectly frames that wider cockpit and windshield, and really establish a finer level of authenticity than any LEGO car at this size should by rights achieve.

From the mid-point of the LEGO vehicle moving backwards, this model is particularly fantastic, with some great changes of build direction and angle to certainly teach builders of the recommended age of 8+ and above a thing or two. Coming in that bright blue and orange colour combination is almost unnecessary for how good the LEGO car is, but it is a nice nod to the GT’s iconic status and unique history (just as the Heritage Edition is to the 1966 GT), and guarantees that it will pull focus when lined up in any LEGO collection.

The 1966 Ford GT that came in 2017’s 75881 2016 Ford GT & 1966 Ford GT40 was one of the very best vehicles Speed Champions designed at the six-stud-wide scale. Since the move to eight-stud-wide cars, which has opened up a whole new level of accuracy in design, this 2021 LEGO Ford GT Heritage Edition stands out and measures almost toe to toe with that black-and-grey-brick masterpiece. The real GT Heritage Edition takes its inspiration and standards from the 1966 version, so it’s very apt to see the LEGO version do exactly the same.

But a single great LEGO car doesn’t automatically make a great LEGO set – 76905 Ford GT Heritage Edition and Bronco R is, as the name suggests, a two-vehicle LEGO product. Importantly, then, the Bronco R is just as much a mastery of LEGO design and detail as the GT Heritage Edition, building a completely different style of vehicle but with just as much of the intrigue and intricacy.

The Bronco R Prototype was announced in 2019 to commemorate 50 years since Rod Hall and Larry Minor’s victory at the Baja 1000 in 1969, widely celebrated as the only time the Mexican off-road race has been won by a 4×4 vehicle. Rod Hall, who passed away in June 2019, is a racing legend, having famously competed at the Baja 1000 for 50 consecutive years, from 1967 to 2017.

With just five months for Ford to design and build the Bronco R Prototype, though, the vehicle endured a tricky 2019 Baja 1000 and ultimately was one of the 119 entrants that failed to finish. Even so, the Bronco generated plenty of interest for the nostalgia of Hall and Minor’s win 50 years prior, and for being a vehicle that will shape 2021’s Ford Bronco design.

All told, it makes for an interesting and hefty entry into the LEGO Speed Champions roster, and while the colour palette is a little more muted than that of the GT Heritage Edition, the degree of authenticity in this LEGO model is no less so.

That black, grey and red colour scheme probably does the design of the set no favours, as to truly appreciate and enjoy all that goes into putting this LEGO version together you need to build it, rather than just look at the photos or play with the final model. There are techniques and tricks buried in this thing, and areas of almost over-building, where an extra level of thought and care has been put into it and all for the slightest of final details.

The LEGO Bronco R is a brick car to be appreciated from all angles, capturing all that defines the real-world vehicle in a way that truly celebrates both the source material and the medium of LEGO. Put it together with the GT Heritage Edition, and 76905 Ford GT Heritage Edition and Bronco R is one of the best two-car Speed Champions sets ever produced.

Included are two fairly generic but well-designed drivers, one for each vehicle. The GT driver looks to be mostly identical to that from 2017’s 75881 2016 Ford GT & 1966 Ford GT40, but there is a nice nod to the more vibrant Gulf-livery colour scheme this car comes in, with the stripes on the driver’s overalls now orange and light blue.

The Bronco R’s driver takes direct inspiration from its source material and is most likely based on Shelby Hall, who was part of the team that drove the vehicle in the 2019 Baja 1000, and happens to be the granddaughter of Baja racing legend, the late Rod Hall. The minifigure comes complete in the overalls worn by the Bronco R drivers who took part in that year’s endurance race, which included Shelby.

Certain LEGO sets deserve your attention and every attempt from you to purchase, regardless of the price. For the anticipation, build experience and final product that it offers, 76905 Ford GT Heritage Edition and Bronco R is one such set. There’s nothing to really criticise either vehicle for, both with consideration to the real-world vehicles they are so accurately based on, and to the wider LEGO experience that they each offer.

Indeed, any thoughts to areas of improvement focus more on the bigger questions around Speed Champions as a line and where it could go in the future. Could – and perhaps should – things like suspension and steering be worked into these cars? Would it be possible at what is as close to minifigure scale as the theme can currently get? Should more of the theme’s minifigures be more openly based around real-life drivers now?

LEGO Speed Champions has played around with the format of two-vehicle sets since the very start in 2015. Since then and heading into 2021, two important changes have occurred that have helped 76905 Ford GT Heritage Edition and Bronco R reach the highest potential of any two-vehicle set the theme has so far produced.

First, the switch to eight-stud-wide cars has opened up all manner of accuracy and intricacy to the design of each Speed Champions vehicle, and second, the move away from including anything other than the two cars in a two-car set. 76905 Ford GT Heritage Edition and Bronco R could have had a bit of track or starting lights or some pit-lane paraphernalia, but instead, the full piece count has solely gone into the two vehicles.

That means this set exists as it does thanks to this fine-tuning of the design process, which, combined with the culmination of six years of LEGO car design expertise, has really set a new bar for LEGO Speed Champions going forward.

76905 Ford GT Heritage Edition and Bronco R is the lead set from the summer 2021 range of vehicles, enjoying the most engaging build, finest design innovations and the strongest pairing of two modern, race-based vehicles inspired by classic cars of the past.

Support the work that Brick Fanatics does by purchasing the very best LEGO sets like 76905 Ford GT Heritage Edition and Bronco R through one of our affiliate links.

It takes at least 60 minutes to put together 76905 Ford GT Heritage Edition and Bronco R, split evenly between the two cars included.

How many pieces are in LEGO Speed Champions 76905 Ford GT Heritage Edition and Bronco R?