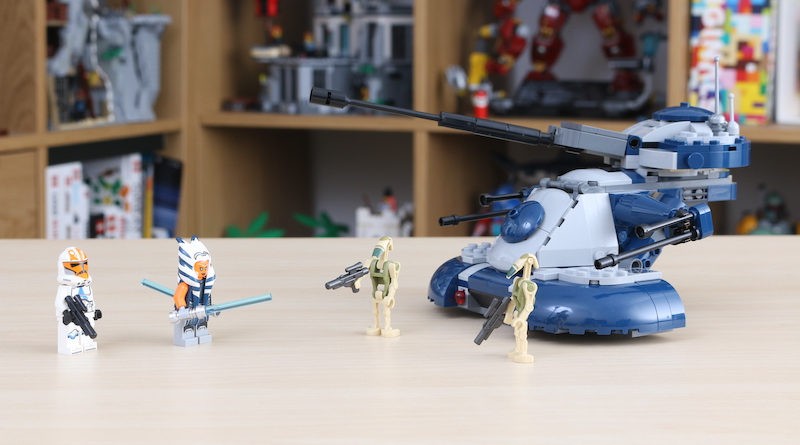 It could have been a LEGO Star Wars classic, but 75283 Armored Assault Tank doesn’t quite strike the same balance as 75280 501st Legion Clone Troopers

In a similar vein to 75280 501st Legion Clone Troopers, there is plenty to forgive about 75283 Armored Assault Tank, but unlike its sister set, fewer magnificent minifigures to help in that process.

It has been pretty clear in the build-up to this set’s release and by its earliest reviews that proportionally, the AAT is rather off the mark, most notably in the almost comically-over-extended main turret. This main, central weapon to the AAT is part of its character as a vehicle, so, the fact that it goes out from the rotating head almost twice as long as it should both distracts and detracts. Scrutinising the set further in comparison with its source material from The Clone Wars highlights the inaccuracies in colour distribution between the grey and dark blue, as well as, again, oversized weaponry on its sides.

These are faults that unfortunately are in areas that do nothing but pull focus. Ultimately, the model comes in at probably two-thirds of the scale it could have been created at for better accuracy, and in aiming to fit the piece-count allotted to a £34.99 set (well, more on that later), the design team has had to make several compromises.

That is not to say that this is a complete write-off of a set, as it still remains a smart and improved design, for how the AAT’s various angles and contours have generally been captured and for improvements in the vehicle’s balance, over previous LEGO editions of it. Either way, though, most initial purchases of 75283 Armored Assault Tank won’t be for the titular vehicle anyway…

The main draw is very much the two minifigures included. The pair of battle droids, marked out as AAT drivers but having only previously been used in Kashyyyk-based LEGO sets, finally end up in the set they belong in, but all eyes – and the driving force behind this set selling out on release alongside 75280 501st Legion Clone Troopers – are on the minifigures for Ahsoka and Ahsoka’s Clone Trooper.

Now a firm fan favourite, Ahsoka’s return to minifigure form here is officially after a four-year wait, following her inclusion in 2016’s Rebels-themed 75158 Rebel Combat Frigate. However, given that set’s initial price at release and the aftermarket prices for Ahsoka’s minifigure from that set since then (she was fetching over £100), it’s fair to assume few have actually owned an Ahsoka minifigure in more like six years,  since the Clone Wars era set 75046 Coruscant Police Gunship of 2014.

From that version of Clone Wars Ahsoka to this version in 75283 Armored Assault Tank, a lot has changed in the character’s appearance and it is faithfully captured in the latest minifigure, across a dual-printed face and carefully designed torso and legs. The criticisms perhaps come in the size of her head tails that are slightly too large for the character at this younger stage of her life (re-colouring the piece used in 75158 Rebel Combat Frigate that was for an older, adult Ahsoka) and for the fact that the LEGO Group could have included a shorter blue lightsaber blade. Those are minor criticisms, though, for a minifigure that otherwise scratches the itch of many a LEGO Star Wars fan to have enjoyed Ahsoka’s recent story arc in Season 7 of The Clone Wars.

From that storyline comes the second minifigure in 75283, Ahsoka’s Clone Trooper, a regular 501st Legion Clone with a repainted helmet in tribute of its former Jedi leader. The minifigure design uses the same body, legs and head as the Clone Troopers in 75280 501st Legion Clone Troopers, with the re-coloured helmet wonderfully capturing a striking pattern across its face. The colouring is perhaps a little too bright in orange, but, it’s an issue that will get easier to overlook if and when you attempt to collect more than one of them.

That’s an ‘if’, unfortunately, because whilst not accounting for future releases, this is the only set that this minifigure appears in and, with only one included, the set otherwise has very little in it to justify multiple purchases of. If the AAT design was a truer, downsized recreation of the vehicle from The Clone Wars, or if there were two of the Ahsoka Clone Trooper included, then the £34.99 price tag would feel less like a barrier and more like permission.

It’s essentially the difference between this set and 75280 501st Legion Clone Troopers. Where 75280 delivers four exceptional and extremely collectible minifigures with otherwise forgettable ‘extras’ for £24.99, 75283 Armored Assault Tank offers two exceptional minifigures, only one of which is collectible in greater quantities, alongside otherwise forgettable ‘extras’, all for £10 more. We hinted at the piece count earlier, and in mentioning the price here’s why –  £34.99 buys just 286 pieces, a grand total of one more than the 285 pieces that come in the £24.99 75280. You can guess that the money is spent on Ahsoka’s ornate headpiece, but knowing why doesn’t make things feel better.

Read our review of 75280 501st Legion Clone Troopers, and support that work that we do at Brick Fanatics by purchasing your LEGO through one of our affiliate links, like this one. 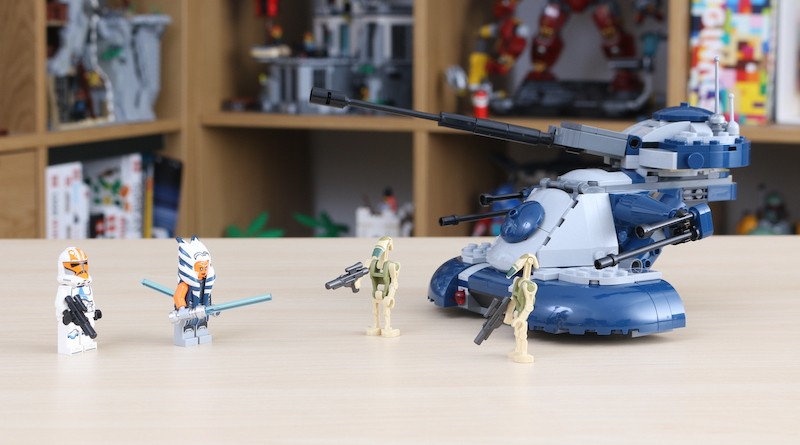