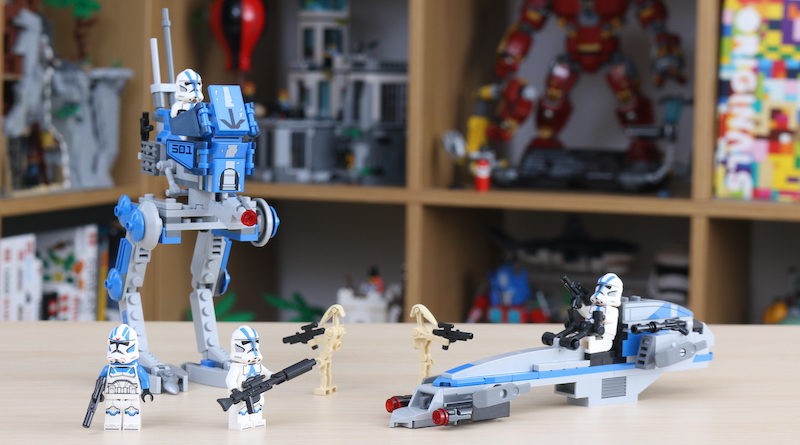 75280 501st Legion Clone Troopers is an overpriced, glorified LEGO Star Wars battlepack, but not one of us cares…

75280 501st Legion Clone Troopers both falls short in so many areas and delivers exactly what so many want. There’s certainly nothing special about the oversized and simplistic models included, it’s twice the price of a battlepack, with only the same number of minifigures included, yet it – predictably – sold out in record time upon release, and we love it.

How can a set do all that in one go? The answer is seven. That’s the number of years since 501st Clone Troopers were last produced by the LEGO Group, and it is also the age recommendation that sits on 75280 501st Legion Clone Troopers’ box.

After you realise and get over the fact that 2013 therefore marks both the last time 501st Clone Troopers were available and the year that those who 75280 is now aimed at were actually born in, it gives you all the information you need as to why 2020’s return to the 501st produces a set both mediocre and, for a lot of LEGO Star Wars fans, as perfect as it needs to be.

Critically speaking, it’s a set that hits its 7+ age recommendation perfectly, with a simple but piece-heavy pair of 501st-themed builds, complemented by four beautifully designed minifigures and two battle droids. That it is built for ages 7+, though, means several compromises in design that ultimately make, for most LEGO Star Wars fans – collectors and army builders in particular – the two vehicles nothing more than oversized and ultimately disposable builds.

The AT-RT is wildly oversized at twice the height, with feet the length of minifigures and a head both too chunky and long. Meanwhile, the BARC is more the length of a real banana than a LEGO speeder bike for a minifigure, with scale putting it at again about twice the length that it should be. These are not criticisms of design, but rather consequences of the target age group the set is for and it’s worth noting that even within these restrictions there are details included in both builds that are very true to the source material, and a credit to the attention designers give every model.

For the criticisms aimed at the models, in size, display and play, though, such is the detail and character caught in the two minifigure designs for the included 501st Legion Clone Troopers, none of that matters. You can build those two models or decide to part out the pieces for other projects, and you can certainly ignore the battle droids and still, for £24.99, feel like you have gotten tremendous value for money, simply because of those minifigures.

It’s ridiculous to suggest that paying twice as much as for a regular battlepack and getting the same number of minifigures represents value, but this quartet really does. They represent not only a return to the most popular unit of Clone Trooper but a marked upgrade in quality and finish, as well as an updated skin tone and face print underneath the helmets. The balance of three regular troopers and one Jet Trooper works perfectly too – they photograph brilliantly and look just as good in real life too. They are designed to be collectible, to build an army with, and a £6.25 a pop (if you truly are ignoring the builds and droids), that’s a more than fair price considering the last seven years of aftermarket prices for previous 501st Clone Troopers.

Seven years is a long time by LEGO Star Wars standards, when you consider how many X-wings and Millennium Falcons we have seen released during the same period. With the popularity of the 501st Clone Troopers barely waning during that period, and indeed only reigniting with Disney’s Season 7 of The Clone Wars, the LEGO Group’s response to fan demand was a long time coming. What with a further four-month wait from April’s announcement and August’s release, it was almost inevitable that it would sell out on release day, and not only did it do so on LEGO.com but then also on Amazon and across other selected retailers.

And that tells you everything about this set. It has been a long wait between 501st Legion minifigures, only made more unbearable by the brilliant close to The Clone Wars television show. 75280 501st Legion Clone Troopers isn’t a perfect LEGO set in the strictest of terms, but, it delivers so well on exactly what LEGO Star Wars fans want and have been waiting so long for. Not every LEGO Star Wars set is all about the minifigures, but this one is, and that’s all it needs to be.

If you’d like to build a more appropriate AT-RT for your soon-to-be-mammoth 501st Clone Trooper army, why not try our design? 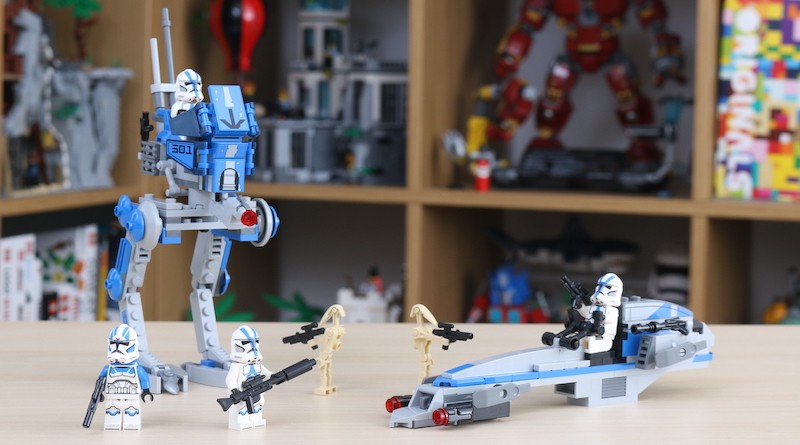