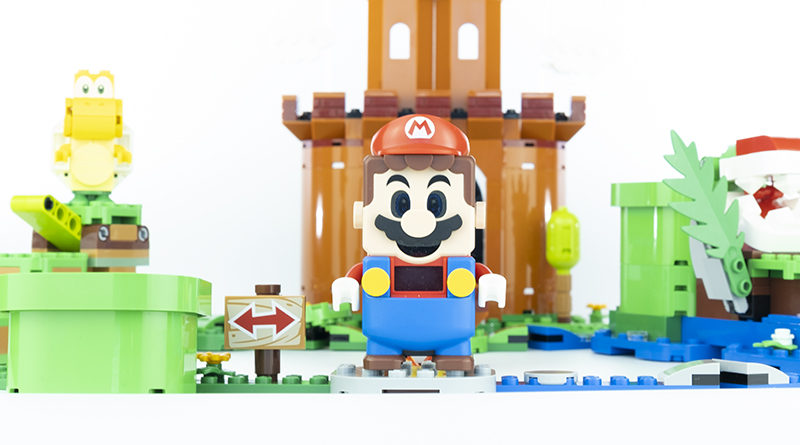 Will Mario take the well-worn route or the path less travelled in LEGO Super Mario 71362 Guarded Fortress Expansion Set? Offering a mini level for the game, the set offers a fortress set piece and three ways for Mario to reach it, each fraught with danger.

As with every set in this theme, 71362 Guarded Fortress Expansion Set requires 71360 Adventures with Mario Starter Course (review) to build and enjoy.

Like many sets in the LEGO Super Mario theme, this is a very basic building experience. It’s mainly clipping plates to the new platform pieces – even building the tower is done using large elements. The stepped platforms are also straightforward.

One part that is a little more involved is the Piranha Plant section, which coils the enemy up into a plant pot so Mario can defeat it. While basic, the gate is also a well designed aspect that earns a nod of acknowledgement during the building.

When the model is complete, it looks nice and fits in well with the aesthetic of 71360 Adventures with Mario Starter Course. The inclusion of grass, water and lava all in one set is a nice touch. The fortress looks neat, matching the vibe that has been established throughout the theme, with the Unikitty! cloud elements put to good use.

Because of the set’s size and the 60 second time limit, it’s one that might be worth just popping the starting plant pot at the front of, then placing the ‘End’ tile by the Mario flag. It’s nice to have an alternative to the Bowser flag in the starter pack.

As for the gameplay, this set works well. On the left hand side, Mario can hop on a lever, sending a Koopa Troopa falling, so he can jump on its back. In the centre track, the hero comes face to face with a Bob-omb, who Mario cannot defeat immediately. First, he must jump on the ‘Pow’ crate, which then allows him to defeat Bob-omb.

That ‘Pow’ create also causes the drawbridge to fall down, where Mario can leap on a plate to earn extra points. That leaves the right-hand route, which leads Mario to a Pirahna Plant. To defeat that, a well-judged tap on a lever sends it back into its plant pot, leaving a tile behind for Mario to leap on.

All of those functions work well, with several of them unique to this set. If it were half the price, the value proposition would feel good – but at £44.99, it most certainly doesn’t.

Featured in other sets too – making army building possible – the Koopa Troopa captures the familiar enemies well. Overlooking the square, LEGO nature of the spherical character, Bob-omb works well too, with the blank expression particularly fun.

Pretty much every set in the LEGO Super Mario theme feels overpriced for what it is, not offering enough in the way of a game and not being as satisfying as a model as a regular LEGO set to justify the cost. It’s the case here again with 71362 Guarded Fortress Expansion Set, although for those who are sold on the theme, it will fit in well with established aesthetic.

71367 Mario’s House & Yoshi Expansion Set will be available from August 1 at LEGO.com. You can help support Brick Fanatics’ work by using our affiliate links.