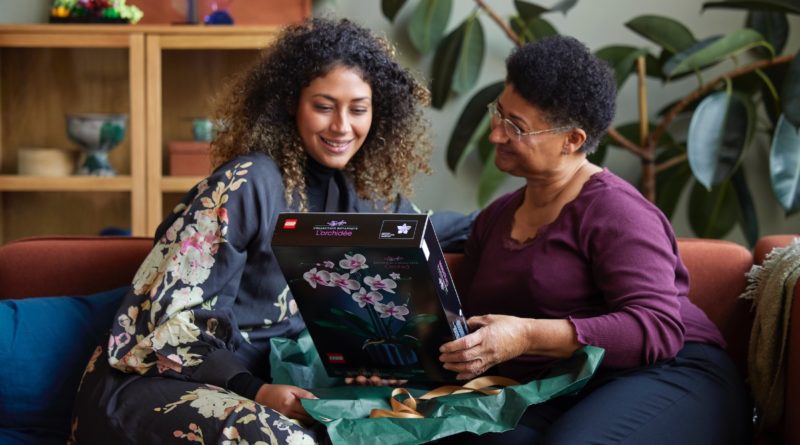 The LEGO Group’s marketing and lifestyle images are getting increasingly weird, culminating in a bizarre demonstration of how to give someone a gift with 10311 Orchid.

With every new LEGO for Adults release – and occasionally with products targeted towards a wider (and younger) audience – the LEGO Group produces and publishes a series of ‘lifestyle images’, which depict its sets in real-world environments. Designed to showcase how a build will look on your shelf, rather than in isolation against a white background, they’re often well-staged and beautifully lit.

Okay, maybe they’re not always hyper-realistic: how many of us genuinely have such minimalist living spaces in which to display single sets? We’d wager not that many, although hardcore adult fans with enormous collections probably aren’t who the LEGO Group is targeting with these images. Instead, they’re aiming to pull in brand new consumers, who don’t have to find space to squeeze the latest LEGO Star Wars ship into their existing fleet.

In that context, the lifestyle images make perfect sense. Except when they don’t. Just check out this curious sequence of photos supplied to press alongside the announcement of this year’s Botanical Collection sets, 10309 Succulents and 10311 Orchid. Not content with marketing copy alone to convince potential consumers that the buildable plants make great gifts, the PR team behind these sets has conjured up images of what that might look like.

You know, just in case you didn’t know what giving someone a gift looks like.

We’re not knocking the majority of these lifestyle photos, because they do make for a much better way to illustrate official sets, and often help to communicate a sense of scale and colour in a way that basic product photography just can’t manage – but that doesn’t mean they’re not also getting pretty abstract.

What’s next? A five-photo sequence of an adult walking past a LEGO Store, spotting the UCS AT-AT in the window, then impulsively going in and dropping £700 on it? You never know – that is presumably the LEGO Group’s dream scenario, after all…

Both new Botanical Collection sets, 10309 Succulents and 10311 Orchid, will launch on May 1. Check our our reviews of both sets by clicking the links below:

You can support the work that Brick Fanatics does by purchasing whichever LEGO sets you like, for whoever you like – regardless of the LEGO Group’s marketing – using our affiliate links. Thank you!