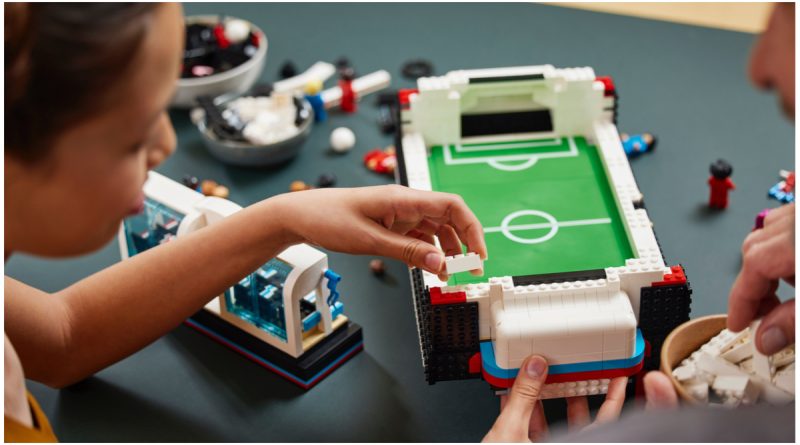 Any set that gets approved on the LEGO Ideas platform undergoes some changes. 21337 Table Football changed more than most, as we see.

The LEGO Ideas platform has been extremely successful and extremely popular, with thousands of designs being submitted. It’s been responsible for some of the most inventive, creative designs we’ve seen in recent years. Sets like 21323 Grand Piano, 21327 Typewriter and 21333 Vincent van Gogh – The Starry Night are models that could never conceivably have appeared in any other theme.

Sets that reach 10,000 votes have already had many, many hours of hard work put into them, and some might see the crossing of the 10k line as the culmination of all that work. But for any model that’s destined to go into production, the work is only just beginning. The LEGO Ideas team, with input from the Fan designer, effectively start again, designing, modelling and testing to ensure that the finished set reaches the standards required by the LEGO Group.

As a result, production sets can differ from the original submission. Some have a few, barely noticeable changes, like current GWP 40566 Ray the Castaway. Others, like the recently announced 21337 Table Football, are almost unrecognisable from that original design. Here, we take a look at some of the differences.

Most obviously, the size! The original was a large set which, at a guess, was something like 70cm by 30cm and stood on tall – and potentially wobbly – legs. The final model appears to be much more compact, something like 30cm by 15cm, and the legs are effectively integrated into the main body of the table, making it a much sturdier affair.

The team sizes have shrunk considerably. Fan designer, Donát Fehérvári, had gone with an 11-a-side format with four control rods per team. As the Ideas team struggled to come up with a control system that didn’t bend and break elements, the decision was made to shrink it down to just two rods – now much shorter – and incorporate the goalkeeper into the line of defenders.

That said, while there may only be five players per side on the pitch itself, a huge variety of players can be created, thanks to the wealth of heads and hairpieces included in the set. To accommodate those extra players, the final design includes a brick built stand which can allow the ‘resting’ players to watch the game, something that’s new, compared to Donát’s design.

On the subject of minifigures, this set breaks new ground by becoming the first non-licensed set to include heads that aren’t the standard yellow. Other skin tones have been in use for years, but have been restricted to licensed sets, while 21337 Table Football runs the gamut of skin tones and head designs.

The overall colour scheme of the set has been altered too. Whereas the original submission had muted, more ‘realistic’ tones, the final model has been given the LEGO treatment and is an altogether brighter, more eye-catching affair. And clearly the hours of play testing led to a more robust method of attaching the players to the control rods. Donát had connected them at the shoulders by a single brick, whereas the final design has them supported in a cradle.

All of which goes to show what goes in to the refinement of a Fan submitted idea. Indeed, as we’ve reported, this set nearly didn’t make it, with the designers thinking that it was too difficult to come up with a strong enough model. But, as we’ve seen, persistence pays off.

If you’d like to support Brick Fanatics, then please consider purchasing your LEGO via our affiliate links. Thanks.