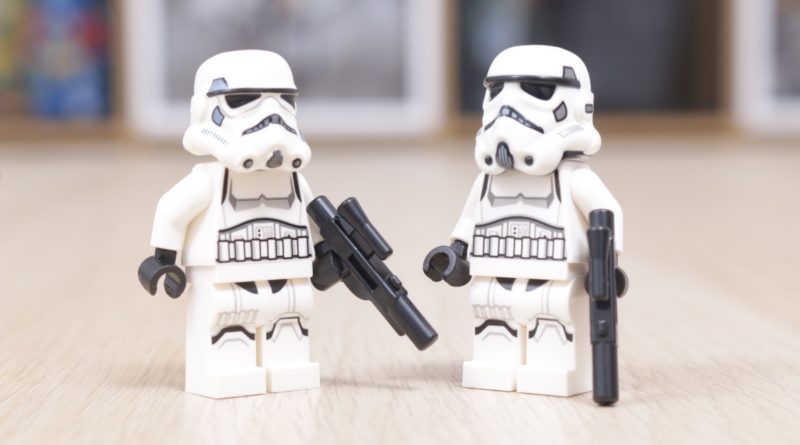 Using the brand new torso and leg prints from 75339 Death Star Trash Compactor Diorama, here’s what LEGO Star Wars Stormtroopers could look like in 2023 and beyond.

Stormtroopers have never stayed the same for long in LEGO, as the design team continually refines and updates the design of its standard Imperial troopers. The last revision arrived in 2019’s 75229 Death Star Escape, headlined by a brand new dual-moulded helmet that’s since divided the fanbase (and has an unfortunate resemblance to Family Guy).

The LEGO Group is now reinventing the wheel yet again in 2022 with 75339 Death Star Trash Compactor Diorama, which debuts new torso and leg prints for Han and Luke’s Stormtrooper outfits. Neither of those minifigures includes a helmet, however, which means the newly-revealed set stops just short of giving us a completely brand new Stormtrooper.

Between the new prints and the white hips – which follow the example set by the LEGO Group’s recent Clone Trooper minifigures, replacing the standard black hips – we’ve got the beginnings of a new Stormtrooper, but to see what our Imperial army will look like going forward, we really need to add in a helmet.

Given we don’t know whether the LEGO Group will continue with its dual-moulded helmet or come up with another new design, we’ve tried out the two most recent Stormtrooper helmets: the current dual-moulded one, and the arguably more accurate and aesthetically-pleasing incarnation from the likes of 75165 Imperial Trooper Battle Pack.

Just as with the clones that first debuted in 75280 501st Legion Clone Troopers, it’s going to take a little while to adjust to the white hips of these new Stormtroopers, which become even more pronounced with the addition of either helmet. But beyond those, both of these helmets work pretty well with the updated minifigure elements.

None of this summer’s rumoured LEGO Star Wars sets – beyond perhaps 75332 AT-ST – seem primed to give us another Stormtrooper, so we could be looking at 2023 before this minifigure becomes reality in an official capacity. But if the LEGO Group isn’t planning on overhauling its Stormtrooper helmet any time soon, these images could well represent the future of the LEGO Imperial military.

If you want to have a go at building these minifigures for yourself, you’ll need to pick up 75339 Death Star Trash Compactor Diorama when it launches on April 26. It’s available to pre-order in the US now. In the meantime, check out our detailed review of the LEGO Star Wars Diorama Collection set by clicking here.