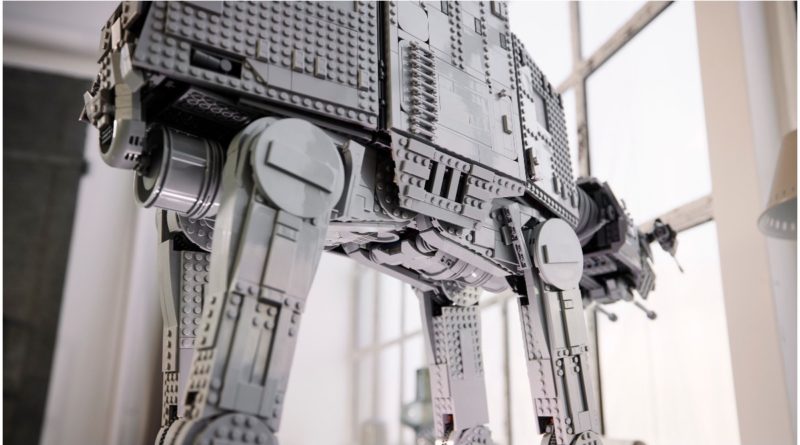 The new LEGO Ultimate Collector Series AT-AT offers plenty of play (and display) potential, but given its massive size, is any other Star Wars model in scale with it?

One of the things we’ve noticed about 75313 AT-AT is that it offers a new approach to Ultimate Collector Series models. While there’s an information plaque there’s no display stand to speak of, thanks to the large footprint (or footprints) of the model itself. There’s also extensive interior detail – something previous UCS models have lacked.

One way or another this is a model that’s meant to be interacted with, whether that’s opening the sides or repositioning the legs. So if you wanted to play with a set like this – using other Star Wars models in your collection – are these models in the right scale, or do they miss the mark?

The official Star Wars site says the AT-AT is 22.5m tall. The recent LEGO version, meanwhile, is 62cm high. That suggests the UCS AT-AT is approximately 36 times smaller than the ‘real’ thing.

We can use some information about Star Wars vehicles on Hoth to see how other LEGO models measure up – literally.

The most recent Snowspeeders worth talking about are 75144 Snowspeeder and 75259 Snowspeeder – 20th Anniversary Edition. The former was released as part of the UCS line, while the latter is the latest in a long line of minifigure-scale models. The ‘real’ Snowspeeder measures 5.3m long, so a Snowspeeder in scale with the UCS AT-AT would need to be about 15cm long.

That means the 20th-anniversary Snowspeeder is actually a little bigger than it needs to be. Measuring 18cm long and 14cm wide, a few of these would work very nicely in our Battle of Hoth scene. At 39cm long the UCS Snowspeeder is a touch big, but it’d still be an excellent companion for display.

While they’re traditionally associated with the Battle of Endor, AT-STs did make an appearance on Hoth as well. A real-life AT-ST would measure 8.6m high, so an AT-ST in scale is about 23cm tall.

At 24cm high, 75153 AT-ST Walker is right on target, more or less. By a stroke of luck a Hoth AT-ST has just been announced, making a Battle of Hoth even easier to recreate. This version measures 26cm high, meaning it’s still in the ballpark for scale height.

While the Millennium Falcon hasn’t faced off against an AT-AT (on screen, anyway) the freighter was instrumental in Princess Leia’s escape. As such, a LEGO Millennium Falcon is a solid addition to a broader Hoth scene. In the real world, Han Solo’s ship would measure 34.75m long, so a LEGO Falcon in scale with an AT-AT would be approximately 96cm in length.

Unlike the other models we’ve discussed, 75192 Millennium Falcon (part of the UCS range) takes the crown here. At 84cm long it’s as close as we’re going to get with recent models. Still, given the set’s considerable price tag, it might be tough to add this one to our hypothetical Hoth.

On balance, then, building a larger Battle of Hoth scene is fairly easy with off-the-shelf models. With luck we’ll see an updated Snowspeeder before too long; in the meantime there’s plenty on the secondary market, including oddities like 75204 Sandspeeder.

75313 AT-AT will launch on November 26 (also known as Black Friday), and early adopters will qualify for a free 40483 Luke Skywalker’s Lightsaber. Check out all our coverage on the enormous new set by clicking here, and don’t forget to read our review.