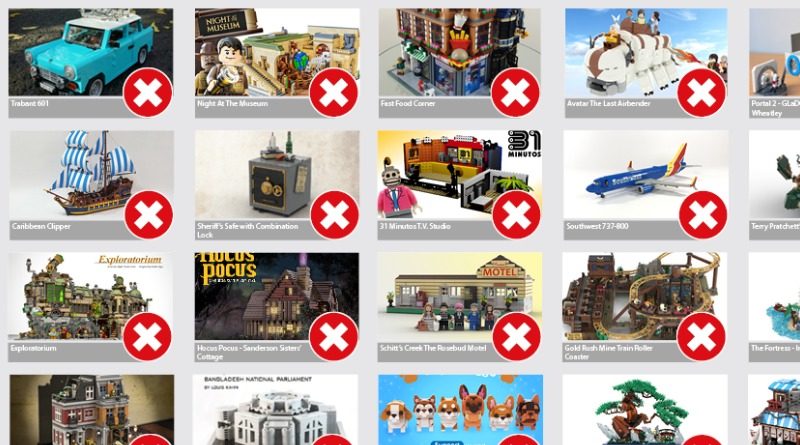 A grand total of 34 different LEGO Ideas projects have been rejected in the record-breaking second 2020 review.

Just one of the 35 projects that were on the table – a record high for a single Ideas review – made the cut, with Truman Cheng’s Vincent can Gogh: The Starry Night approved for production as a future set.

The rest will all be consigned to the great LEGO Ideas graveyard of failed projects, despite reaching 10,000 supporters on the crowdsourcing platform. Among those is Ivan Guerrero’s Community – Greendale Community College, hachiroku24’s Portal 2 – GLaDOS vs Chell and Wheatley, and Brent Waller’s Zen Bonsai.

The reasons for rejection are pretty obvious for plenty of the projects on the full list – we’ve just had an official Bonsai in 10281 Bonsai Tree, for instance, while Truman Cheng’s other proposal in this review, LEGO Doggo, is very similar to the newly-released LEGO BrickHeadz Pets set 40440 German Shepherd.

Where projects like Harry Finkel’s The Mountain Windmill and Thomas Carlier’s Ratatouille: ReOpen The Doors are concerned, though, the reasons become less clear. In fact, this is the second time Carlier has carried an idea based on Pixar’s Ratatouille to 10K, but despite the clear appetite for an official set among LEGO fans, the Ideas team has once again said no.

While the specific reasons for each project’s rejection will remain a mystery, we do know some of the criteria the review board uses when making its decision, including: the current LEGO portfolio; other products currently in development; licensing possibilities; playability; and brand fit, among many others.

This may not be the last we see of at least some of these 34 projects, however, as the LEGO Group is about to begin trialling using the BrickLink Designer Program to launch rejected LEGO Ideas proposals.

Alongside Cheng’s Vincent can Gogh: The Starry Night, the LEGO Group has also confirmed that Viv Grannell’s Sonic Mania Green Hill Zone, which was originally up for contention in the first 2020 review, will become a future Ideas set. The results of the third 2020 review will be announced in summer, with another 25 projects up for consideration.